Should we tip artists?

YOU TIP your waiter, you tip your hairdresser, you tip the valet who brings you back your car in one piece. But would you tip an artist?

Atlanta-based performance and installation artist Allison Rentz thinks maybe you should. During the December 4th First Friday Art March in the Starland neighborhood, Rentz will be leading an interactive installation at Escape Savannah (2101 Bull St.) titled “Tip Your Artist”.

The walls will be papered with envelopes bearing Rentz’s “Tip Your Artist” credo. Visitors are encouraged to take envelopes, put a few dollars in them, and tip the artists hosting opening receptions at galleries along the Art March.

Rentz sees the installation as a work of social activism. She points out that for most working artists, it can be a struggle to make a living selling artwork. Rentz believes that if you’re going to gallery shows and enjoying but not buying the work, you may have a social responsibility to help subsidize the artist’s wages.

“In Atlanta people tend to go to art openings to party and they don’t usually buy any art,” she explains.

“Since it’s a party environment and the art is kind of a backdrop, it’d be nice for people – if they like the art but aren’t going to buy it – to give the artist a dollar or something to thank them for the beautiful moment they created for the viewer to experience.”

Rentz takes her project out gallery-hopping with her in Atlanta – she always keeps “Tip Your Artist” envelopes on hand to share with other gallery patrons or to pass along to artists herself. Unfortunately, the project doesn’t always go over well with the artists Rentz is trying to help.

“Some people will get insulted about [the money],” she said. “Not that they’ve received a tip but they’ll kind of go off on me about how it’s such an insult – one or two dollars.”

On the Facebook page for the project, Rentz makes reference to an incident in which an artist she admired called a tip “an insult,” adding, “I asked her if she ever accepts money for her art and [she] said that she will sell it for $5,000 and that a dollar is an insult. I don’t think she understood the project, but it was a bit of a heated discussion...”

Some patrons have been reticent to participate as well: people often tell Rentz they’re too shy to approach the artist or feel uncomfortable handing them money.

(This is a problem Rentz says she’d like to solve by offering paper airplanes, slingshots or Frisbees as alternative delivery systems. I, for one, would love to live in a world where people throw paper airplanes of cash at exhibiting artists.)

But do artists actually want to receive tips? I decided to ask a few local artists how they felt about the idea. 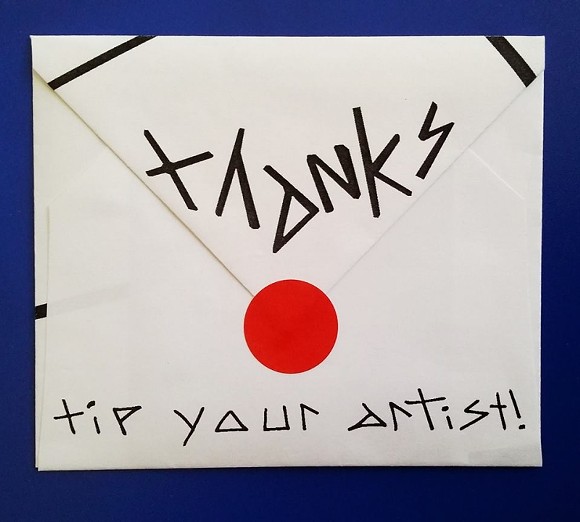 A popular Starland photographer tells me: “To be perfectly honest, I think I would feel a little weird about it, but it’s not like I would turn it away. Sometimes you gotta take what you can get. Supplies, time, the money it costs to rent a gallery space, framing, PR, refreshments for the opening, not to mention the notion that your ideas are worth something – that stuff adds up quick.”

Other artists say they find the whole thing awkward, that receiving a tip would make them feel uncomfortable, and a few suggest it might even be unprofessional to accept one.

One painter says he felt accepting tips would devalue his work, perhaps encouraging people to see tipping as an equal alternative to actually buying his art.

Another local painter expresses his fear that tipping might be bad news for the local art scene: “If such a thing were to become the norm, it might have a negative impact on the number of people showing up to exhibitions,” he says.

“The effect would be people feeling ashamed to view art unless they could afford to do so. Social shaming is a powerful force.”

Of course, Rentz isn’t suggesting that tipping be mandatory or even expected.

“People can tip if they want but they don’t have to,” she tells me. “It’s really about if you love [the work]. It’s not supposed to be something that everybody has to be doing all the time.”

Regardless of the clearly mixed attitudes surrounding the topic, it’s a little strange that there seems to be a stigma attached to tipping fine artists. We tip live musicians all the time and the experience of enjoying their work can be just as ephemeral.

We tip bartenders, house painters, and pizza delivery drivers too, and we tip everybody for the same reason: as a reward for their time, their skill, their willingness to provide a good experience, and (too often, unfortunately) to bridge a gap in their wages.

Do exhibiting artists really fall far outside that definition?

If the service an artist renders is to create beauty and engage people spiritually, emotionally, and intellectually, isn’t that worthy of a tip?

More »
More Art Beat of Savannah »
All Arts & Entertainment »
Comments (3)
Add a comment
Subscribe to this thread:
By Email