Shout at the Devil 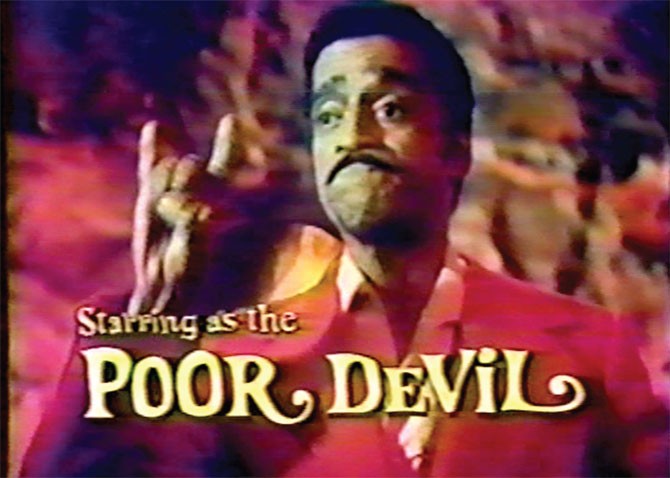 Sammy Davis, Jr., to put it lightly, was a character. A member of The Rat Pack, incredible drummer, actor, and known reveler, his multitude of talents only played up the wicked charm he emanated.

“He was the only one-eyed, black Jew that I know of,” says Psychotronic Film Society of Savannah’s Jim Reed. “If he were gay, he’d be the great American underdog!”

Alas, Sammy Davis, Jr. was pretty hetero. A wild socialite, he truly believed in living life to the fullest, once stating that he “wanted to have every human experience.”

Some people may not include practicing Satanism—and starring in a TV pilot-gone-bad promoting it—as great bucket list additions. But for Davis, who died in 1990 with more than a few zany stories to tell, it was all just a part of living up that SoCal life.

Let’s flash back to the early ‘70s. In the time in which it was very chic for young Hollywoodites to sport a red fingernail, showing their allegiance to the Church of Satan, Davis found himself at a particularly debaucherous party. According to legend, all attendees wore hoods and masks, a nude woman was perched atop a red velvet-draped altar, and all manner of hedonistic activity carried on throughout the night. That evening, Davis met Anton LaVey, founder of the Church of Satan and author of the Satanic Bible. The two hit it off, and in 1973, Davis was made an Honorary Second-Degree Warlock.

“It’s like studying with Bruce Lee and becoming a Fifth-Degree Black Belt,” offers Reed. “He studied with Anton LaVey and became an honorary Second-Degree Warlock.”

The promotion, though, was due largely in part to his role in the feature-length NBC pilot for Poor Devil, which Psychotronic Film Society will screen on Wednesday.

A twisted, so-not-PC comedy, Poor Devil centers on a doomed-to-hell Davis. Even in underworld, a man’s gotta work; a bumbling Sammy (yep, that’s his character’s name), clad in a killer red jumpsuit and pointed collar lapel, wiles the hours away shoveling coal to keep the brimstone burnin’.

When Lucifer himself (played by none other than Christopher Lee) offers Davis a promotion (one that gets him in closer proximity to Hell’s smokin’ hot secretary), Sammy attempts to score the soul of a San Francisco accountant, portrayed by post-Odd Couple, pre-Quincy, M.E. Jack Klugman.

Reed praises Lee’s performance; at the time, he was thought of as Britain’s Dracula, and the iconic Wicker Man had just been released that very year.

The role, which allowed Lee to break his serious streak and try his hand at comedy, suits him perfectly. Most irksome, however, is Davis’s trademark glittering smile amplified by flames and inverted pentagrams.

Obviously, Poor Devil was fiercely protested by religious groups for upbeat attitude toward Satanism (Klugman’s character, upon losing Sammy: “I’ll call the Church of Satan downtown, they’ll know how to contact him!”). The plug was pulled on the potential series. A few late-night channel surfers caught the pilot, but it quickly vanished and was never released on VHS.

Reed, a diehard Davis fan, tracked down the copy he’ll be screening through a private collector with “a friend in television.” It’s an uncut gem from the archives of a TV station with great picture quality so every hellish detail can be enjoyed.

Temple of Set founder and Fourth-Degree Satanic priest Michael Aquino caught the film was delighted by Davis’s promotion of the Church, which aided in Davis achieving Warlock status. It was certainly no coincidence; Reed hypothesizes that Davis planned to use Poor Devil as a way to position himself as a face of a movement.

“It was clearly a vehicle for him,” says Reed. “He felt like Satanism was the hip new thing. He thought it’d be trendy.” Keep in mind that The Sentient Bean offers specials on their craft beer and wine list during Psychotronic screenings; Reed advises that attendees may want to take them up on the offer for this particular screening.

Really, when it all comes down to it, Poor Devil is just a satanic take on the plot of It’s A Wonderful Life—perfect Psychotronic holiday fare.