Shouts from the underground

A look back at the gleeful subversiveness of Albion's Voice 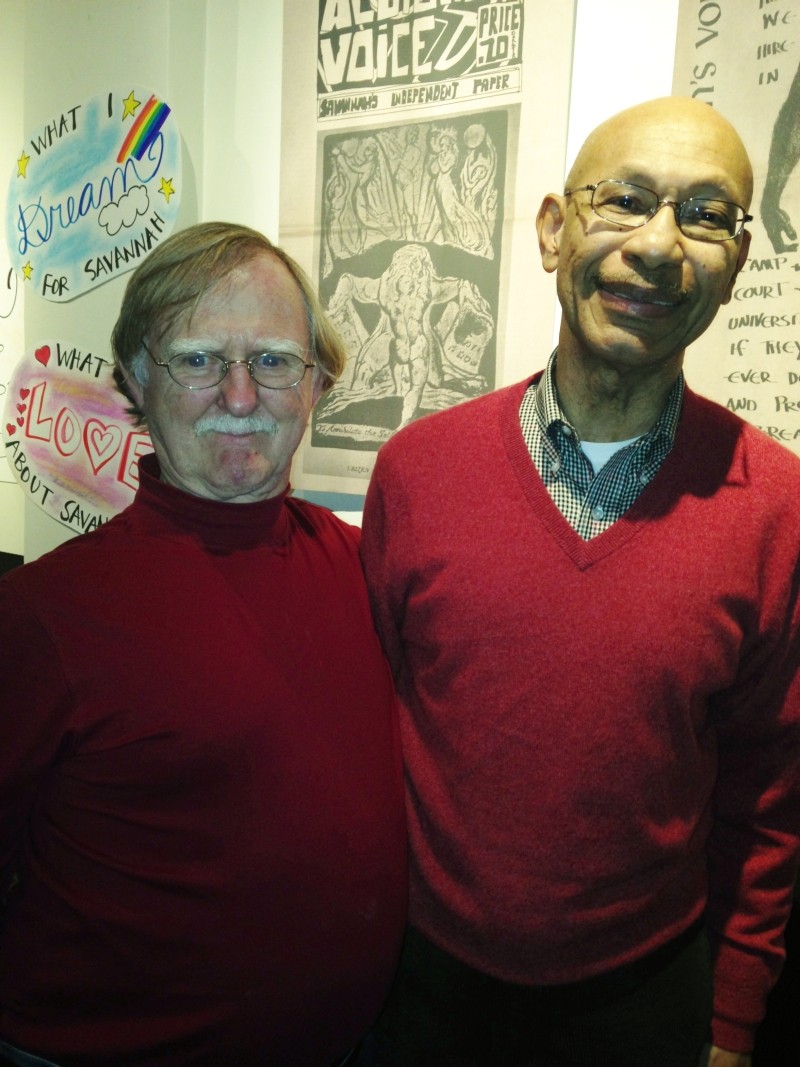 Read all six issues of Albion's Voice at library.armstrong.edu/speccoll.html

IN A WAY, 1970 seems like a million years ago, ancient history, even:

Gas cost 36 cents a gallon, and a postage stamp was six cents. Richard Nixon hadn’t yet disgraced the presidency, and Neil Armstrong’s footprint on the moon was a brand-new marvel.

The country aggrandized its economic and industrial accomplishments, but it was also a year of outrage and sadness: Enmeshed in Vietnam, U.S. troops invaded Cambodia.

By then Savannah had made it through the Civil Rights Movement with remarkable unity and minimal drama. But macro social and environmental shifts still eluded the city in 1970, as city leaders doggedly resisted school desegregation and begrudgingly built a sewage treatment plant only after repeated threats from the State Water Board.

The fact that the counterculture made it to Savannah at all may well be attributed to a kid named Bill Strong, who had traveled to San Francisco and maybe inhaled at People’s Park in Berkeley and saw that America was on the brink of cultural and sociopolitical revolt.

The Southern son returned to Savannah a long-haired hippie freak, determined to get something happening here, though just what wasn’t exactly clear.

The doors of perception unfogged in 1970, when Strong got his hands on a $750 grant to start a literary publication at Armstrong. He and a handful of like-minded bohemian weirdos launched Albion’s Voice, an underground newspaper that attacked the scourges of racism, women’s inequality, environmental degradation, unchecked capitalism, gay bashing, police brutality and other topics that the self-proclaimed decent folk hoped to suppress and ignore.

With a handwritten aesthetic and scissor-cut graphics from William Blake’s The Marriage of Heaven and Hell, Albion’s Voice resembled a cross between an 18th-century political pamphlet and a Grateful Dead poster.

Unafraid to confront the status quo with gleeful sedition, its founders thumbed their noses at threats from the KKK and a city plot to plant drugs in their office.

They sold their papers illegally, declaring a Free Speech Zone at the corner of Victory and Bee Road (right across the street from the current Connect offices. Coincidence or conspiracy?)

“The potential for change was so great, and we reveled in being rebels,” recalled Strong—who grew up to become Will instead of Billy—at a packed Sentient Bean last Saturday during a reunion for Albion’s Voice contributors.

The revelry was short-lived, however: After Albion’s Voice published an article about Union Camp’s horrific polluting practices, the college’s administration kicked the paper off campus, forcing it to go truly underground—or rather, into the living room of English professor James Land Jones.

Strong and his crew of subversive rabblerousers managed to publish a few more issues, but it was hard to find sympathetic advertisers (shocker!) to pay for print costs.

The last edition—and its first annual Save the World issue—dropped the same year.

“Obviously, the time isn’t right for Savannah to have this kind of paper,” lamented Strong in his last editorial.

Forty-five years later, in a strange turn that would’ve seemed inconceivable and probably a total sellout back then, all six issues of Albion’s Voice have now been archived at Armstrong’s Lane Library.

“As far as we know, this is the only complete set in existence,” said Special Collections librarian Caroline Hopkinson, who digitized the collection.

Hopkinson emphasizes that the pirate paper’s preservation was made possible by Armstrong history professor Mark Finlay, who rediscovered Albion’s Voice while researching environmental activism in Savannah. Dr. Finlay had pushed for its proper recognition for years before he died tragically in a car accident in 2013.

Faculty sympathizer Jones is gone, too—murdered in the late 80s—and his partner Jack Miller donated the collection from his personal belongings. Also commemorated at the reunion was Aaron Buchsbaum, the beloved local civil rights attorney who passed away earlier this year and, according to Strong, spent much of 1970 bailing kids out of jail for selling Albion’s Voice on Savannah’s streets.

In the first week of 2015, more than 100 people paid homage to the little liberal rag that shook its fist at the Man: Student firebrand and immigration advocate Elly Marisol Estrada addressed the subjugation of women then and now, and Armstrong alum Mickey Youmans quoted an article about the industrial wasteland of the Savannah River that sounded like it could have been written last month. (Oh wait, it was.)

Jim Reed delivered a truly memorable reading on the perceived sexuality of black men, cheekily written by none other than the Rev. Leonard Small, another longtime apostle in the ranks of Savannah’s community activism. Information architect Brittany Curry chronicled the ‘zine’s history in a spray of colorful markings.

Big applause came when former mayor Otis Johnson, Armstrong’s first black student and an icon of Savannah’s Civil Rights movement, called for a rebirth of the movement that demanded social change through a vocal free press.

“I still believe in America’s unfulfilled promise of freedom, justice and equality for all,” he vowed.

I think most of us do. And since you’re reading this, you probably also dig the idea of a publication that questions mainstream authority and tries to present alternative viewpoints.

Yet audacious editorials only go so far.

“Underground newspapers can serve as a weathervane,” reminded Strong. “But they can’t create a revolution.”

Dude, tell me about it. As someone who’s been shout-writing about injustice and ineptitude for 20 years at free newspapers, I have yet to instigate a single riot.

We might think of 1970 as the olden days, but in 2015 we’re still writing about the same goddamn problems: Endless war. Police brutality. Protests in the streets. Racial and socioeconomic disparity.

The Port of Savannah may have grown and the hotels on River Street gotten taller, but the future of the river and the schools and the job market look as bleak as they did when the Albion’s Voice kids wrapped the Confederate Memorial in Forsyth Park with protest signs (Savannah’s first yarnbomb?!)

Yet somehow, this city has managed to support Connect for over 15 years, and though any alternative press must now compete with cat videos and listicles about celebrity boob jobs, the legacy of Albion’s Voice is the stubborn belief that the “potential for change” that bubbled up in the 1960s will one day be permanently activated.

That, of course, will require action: A new project by Emergent Savannah is asking every one of us two questions over the next few weeks:

Post your answers at the Sentient Bean (that bastion of rebellion!) through January, after which they’ll be collated into a collective vision and a strategic plan for the city we want to create.

We don’t need a weatherman to know which way the wind blows, friends—but we do need to get our heads out of the 1970s.

And to fulfill the promise of liberty and justice for all, we have to show up for the revolution.