The brothers Aranda set their sights out of Oklahoma City 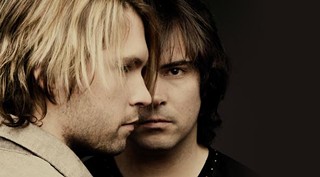 The big dust bowl out of Oklahoma City these days is the rock ‘n’ roll band Aranda. Fronted by brothers Gabe (lead vocals) and Dameon (guitar and vocals) Aranda, the band is getting attention because Kelly Clarkson, whose music couldn’t be more different from theirs, covered two Aranda originals on her 2009 All I Ever Wanted album.

The tunes are “Whyyawannabringmedown” and the title song, “All I Ever Wanted.” The Clarkson album has gone multi–platinum – presumably selling to teenyboppers not familiar with the hard–charging Aranda versions.

“You kind of lose a little street cred,” Gabe Aranda laughs when asked if the great Clarkson coup isn’t actually a double–edged sword for the brothers.

The checks, he says, aren’t rolling in just yet. These things take time.

“As far as the financial benefits, we haven’t seen anything from it. But she’s selling a decent amount of records, and when that stuff does start to come in it’s going to help us fund our own projects. And keep this band going, because at the level we’re at now we need all the help we can get.”

In the meantime, Aranda travels from yon to hither, hawking the Aranda album, trying to win over new fans. The band opens for Halestorm Thursday, Dec. 3 at the Live Wire Music Hall.

At 28, Gabe Aranda is 18 months younger than his brother. They each write the band’s songs, and their harmony vocals are a big element in the propulsive nature of the music, which blends a sort of ‘80s power–ballad thing with Van Halen and Hendrix riffing, and an order of Red Hot Chili Peppers funk on the side.

Rock ‘n’ roll brother acts, of course, are notorious for imploding under the stress of constant music–making.

“We did a lot of our fighting when we were young,” Aranda says. “It’s almost like we fought ourselves out, whereas we’re so close now that it’s like I can’t even remember the last time we had a real fight. I mean, we argue and stuff like that.

“But all the bands that we love, the Black Crowes and Oasis, you hear about these brothers knocking each other out onstage. We never had that before. We realized that this is what we want to do, and that stuff is only going to be counter–productive for us.

“Maybe after we get a hit we’ll start fighting, I don’t know.”

The current club tour is the farthest the brothers Aranda and their compatriots have been from their native Oklahoma. From the start, Gabe Aranda says, this has always been the family’s dream.

“My dad started teaching us both guitar when we were little,” he recalls. “Dameon just took to it – he was just a prodigy right out of the box – but I decided it was too hard, and started singing.

“Music was always a big part of my family’s life. My cousin’s the bass player in the band, and when we were little we would put on shows in my grandparents’ living room and stuff. And they encouraged it. I think that was the key.

“My grandmother to this day, whenever we play within two or three hours of Oklahoma City, she will be at the shows. That’s the type of support we’ve gotten from our family over the years.”
Gabe Aranda’s lead vocals are from the throat–shredding school of Lou Gramm and Stephen Tyler. Traveling from one smoky club to another, in all kinds of weather, the vocal chords must be protected.

“For me, it is a battle,” he says. “I can speak for both of us – we both sing with everything we have. It’s not a technically sound technique, you know? We’re not singing from the diaphragm – we have no idea what we’re singing from, just the heart.

“My brother can bounce back from blowing his voice out in a couple nights. He’s back to normal. Me, I’ve got to really watch it, really warm up before the shows.

“First and foremost you just have to say ‘It’s a gift.’ I think we all have gifts that God gives us, and it’s what you do with them ... it’s recognizing those gifts and working on them.”

And until the Kelly Clarkson royalties appear in the family mailbox, working will be the operative word.

Not that a little money or notoriety will slow them down.

“You just want to get to a point where your band is self–sustaining financially,” Aranda says. “It’s fun and all, but it’s still a business. We’re out here running a mobile business, running around from city to city.

“And you can’t do it for free. Everybody’s got bills at home and stuff that’s got to be paid.”