For a full schedule of October's Domestic Violence Awareness events, go to safeshelter.org. 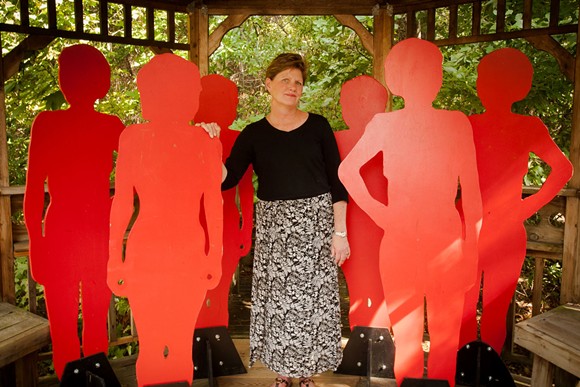 AT FIRST glance, the painted red figures in the store window could be mannequins, waiting to show off the latest fashions.

Step closer. The forms are shaped like real women, not supermodels. They are stark, unadorned except for a bronze breastplate bearing the name of an actual woman. Beneath the name is her story, and the end is always tragic:

Mandi Kaiser, mother of three. Strangled and beaten by her boyfriend.

Susan Robbins, grandmother and business owner. Beaten to death with a board by her husband.

The rest of the twelve red silhouettes symbolize the other Savannah-area women murdered by their partners or family members since 2011, plus one more to signify those whose deaths have gone unnoticed or uninvestigated.

Staged by SAFE Shelter Center for Domestic Violence Services, the Silent Witness exhibit is meant to be a powerful reminder of vibrant lives cut short and the secret abuses that could be happening behind the doors of family, neighbors and friends.

“The purpose of this living memorial is to ensure the individuals represented will be remembered not merely as victims, but as people with stories and dreams,” says Cheryl Branch, executive director of SAFE Shelter. “Then they fell in love with someone and that person killed them.”

The mobile installation is part of SAFE Shelter’s packed roster of events for Domestic Violence Awareness Month this October. The red silhouettes debut at noon at Forsyth Park on Wednesday, Oct. 5 as the fountain turns purple, the official color of the cause. That same evening at 6pm, they will be joined by hundreds for a candlelight vigil. Later in the month, supporters will circle Lake Mayer for a 5K sponsored by the Armstrong Nursing Program on Oct. 22, and the Coastal Georgia Center will host the Mental Health Meets Domestic Violence Conference on Oct. 26.

The Silent Witness figures will travel throughout the month, spending a week in the windows of 24e on Broughton Street, garnering attention from downtown shoppers before moving south to the Oglethorpe Mall. Their dramatic presence is meant to disrupt the shame and confusion that keeps domestic violence behind closed doors.

“We want this to be something that people see and talk about,” says Laurie Ross, SAFE Shelter’s communication liaison.

“People still tend to talk about domestic abuse in hushed tones, like it’s only supposed to happen in certain places. The truth is that it crosses every walk of life—all socioeconomic situations, every race, people in the military, everyone.”

Since 1979, SAFE Shelter has given respite to thousands of abused women and their children at its cozy 48-bed emergency facility, providing not just temporary room and board but resources to build their lives anew. It’s the only local shelter that keep families together, and some leave their homes with nothing but what they can carry in a grocery bag. Children have separate counseling and social services, and the recently opened YES center gives teens their own clubhouse to do homework, watch TV and relax.

In addition to therapy and career counseling during its 90-day program, clients receive and follow-up case management for up to two years. The staff also helps clients file temporary restraining orders and act as advocates in court.

“The criminal justice system can be as intimidating as hell, and a lot of women have been told by their abusers that they don’t have any rights or that they’ll lose their kids,” says Branch, who lauds the cooperative relationships SAFE Shelter has built with the police, District Attorney’s office and other advocacy organizations.

The 30-year veteran of domestic violence work notes that SAFE Shelter isn’t just for women and children: plenty of men come through the off-site Outreach Programs, some victims of international trafficking.

She also reminds that violence isn’t just perpetrated by partners. In 2015, of the 14 domestic homicides in Savannah, five were children killed by parents, and one was a mother killed by her son.

“Shay” has been at the shelter for about six weeks after being beaten by her mother and sister.

“I ended up here because I needed to make sure my children were safe,” says the 22 year-old mother of two. “It’s been the best thing for us. I’m learning how to build a life for us piece by piece.”

While its facility has been at capacity all summer, SAFE Shelter does not turn away any calls to its 24/7 hotline, finding a place for domestic violence survivors in partner organizations or private homes if necessary. The non-profit received 1800 calls and served 813 clients in 2015 and runs programs to help middle and high school students prevent becoming victims themselves.

Perhaps the most telling point of the program’s success: No one who has found the courage to reach out to SAFE Shelter has become one of those red silhouettes.

But there is still much work to be done to help those enduring abuse seek support and make others aware of the dangers of staying silent.

“People don’t want to think that they or their neighbor or family member might be abused or be an abuser. They think it is somebody else’s problem or that it will get better on its own, but it never does,” says Branch.

“Our hope with this exhibit is to give past and potential victims a voice and stop the cycle of abuse.”

Style for all sizes at fashion show to benefit Safe Shelter