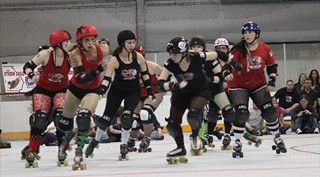 Derby Devils come from all professions and backgrounds, with ages 20-54

The Savannah Derby Devils' fifth year kicks off this weekend with a big change – the team will showdown against their rivals from Charleston at the Civic Center, rather than their longtime home at Supergoose.

“The whole thing is a big deal,” says Derby Devil member Ira Fuse. “We worked a long time for it.”

Since 2006, the local roller derby squad has been hosting home bouts on the eastside, but their fan base has grown so much over the last several years that they needed to expand, particularly for parking. In some cases, they’d had to delay jams (derby jargon for the incremental rounds that comprise a bout) because players had to run and move their cars before being towed.

Growth might be the over–arching theme for the team this season. Besides the move into the Civic Center, the Derby Devils numbers have expanded enough that they now have two full squads (the A and B teams, both of which will take to the track against Charleston this weekend), and are working on developing a third team in addition to a junior program open to teens.

To the uninitiated, the assumption might be that the Derby Devils are some unholy mass of tattoo–covered ladies with short tempers, violent inclinations and torn fishnet stockings – like the Hell’s Angels Ladies Auxiliary – but that couldn’t be further from the truth.

“We have reporters, nurses, stay–at–home moms, artists – a little bit of everything,” explains Ira Fuse. Team members range from ages 20–54, and run as wide a gamut of size and shape.

They aren’t outlaws searching for an outlet; rather they are a group of women who spend a lot of time, on and off the track, pursuing a passion.

“It takes a lot of work and a lot of training to do what we do,” says No Mercy Jersey, who’s been with the team for about a year.

Although this weekend marks the start of the new season, there is no actual off–season. There are practices two or three nights per week in preparation for monthly bouts against teams from across the Southeast, and then scrimmages during months without bouts.

“I didn’t realize it would be a complete lifestyle change,” says Notorious Ned Kelly. “I thought I’d just show up for two hours and skate.”

Once a year, there is boot camp, a recruitment tool that helps introduce new members to rules and physical rigors of the team. Last year’s event turned out nearly 100 new skaters, and the Derby Devils retained close to 30 of them – an unprecedented success.

After joining the team, skaters choose a derby name, and so begins their new dual existence – one on the track and one off. You might see team members in the grocery store and not even realize that they are throwing body checks on roller skates and answering to names like Felony Melanie or Fear Abby.

“I think its interesting where the two collide and how they influence each other,” explains Jammunition, who still describes herself as shy, but says Derby’s influence has helped make her more confident and outspoken.

While the bout against Charleston isn’t exactly the Yankees vs. Red Sox of Lowcountry roller derby, there is a burgeoning rivalry, and the two teams are evenly matched.

“My first bout was last year when we played Charleston and it came down to the last jam. I think we lost by 2 or 3 points,” says Jammunition. “I’ve been looking forward to this bout.”

If you haven’t had a chance to check out the home team, the bout on Saturday will be a good opportunity – there will be an emotionally heated battle between two evenly matched opponents, a live band (the MENSA bullies) and beer (another perk of moving to the Civic Center.

“The crowd is a full spectrum of folks, from children to grandparents,” says Ira Fuse. “I’ve never heard anyone say they haven’t had a great time.” 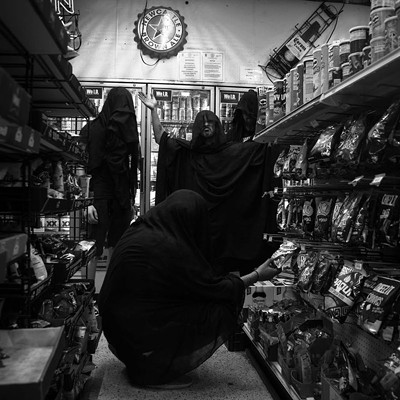