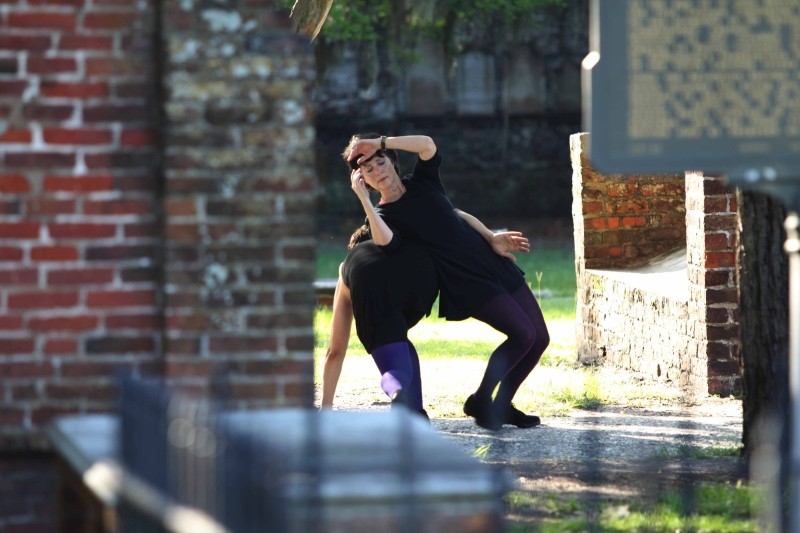 IT is early morning at Colonial Park Cemetery, the serene ambience of the long dead not yet disturbed by the bustle of Liberty Street's commerce and tourists.

Three black-clad figures in purple tights approach the main gate just as the sunlight breaks through the oak trees. They shuffle silently near the stone stairs as a few early commuters waltz by, coffee cups in hand and earbuds in place. The women in black roll their necks and shrug their shoulders, ignored except for a white poodle that stops to sniff at their heels, then clicks away on tiny feet with its owner.

Suddenly, as if by telepathic agreement, the trio breaks into a syncopated march along the sidewalk, their stride becoming stronger and more purposeful with every step. One of the women begins to swing her arms wide, and the other two break away into their own rhythm, twisting their torsos and ducking along the fence.

A couple of firemen hosing down their red truck at the station next door stare after them, then begin to mimic their movements as the group continues to twirl among the crumbling headstones.

A man watching it all unfold from a nearby bench sidles up to another onlooker.

“I gotta know. What the hell are they doing?”

You might wonder the same if you encounter the bodies of Savannah Moving Art Projects (SMAP) in action. Conceived by renowned dancer, teacher and somatic movement pioneer Janet Kaylo, SMAP is a form of public art that presents spontaneous movement in ordinary places.

Think of it as kind of an improvisational flash mob.

In her artist’s statement, Kaylo defines SMAP’s primary aim as a way to “interject embodiment as an implicit element of present-moment experience.”

“Basically, we are enhancing the environment with movement. It’s different than a performance, where things are more static,” explains Kaylo, a former featured dancer in several New York companies who founded the New Orleans Repertory Dance Theatre and the Laban/Bartenieff Institute of Movement Studies at York University in Toronto.

She moved from London to Savannah last year to “slow things down,” and though her purposeful choreography may be as graceful as a bird’s expanding wings, Kaylo has done anything but sit still.

In addition to teaching regular classes at Savannah Yoga Barre, she has orchestrated SMAP happenings at several high-profile Savannah locations, including the Bull Street Library, The Waving Girl Statue and the wholly unartistic setting of the CAT bus station.

Each event takes place in two 30-minute parts, in the filtered light of both dawn and dusk—“the mystery imagination time,” as Kaylo calls it. She maps out the selected space beforehand, and while there’s a loose structure to the choreography, for the most part it is all developing in real time.

The point is to affect and be affected, and reactions from observers range from confused and apathetic to curious and engaging.

“When you’re in it, the story just sort of takes a hold of you,” says Kaylo.

“In fact, the best reaction we’ve ever had came from a little boy who was watching us at the library and asked, ‘Can I join your story?’To get that much gleeful curiosity out of people is amazing.”

Joined at the cemetery by Sunrise Healing Arts massage therapist Dawn Tanis and visiting artist Nadine Saxton, Kaylo leads the way through the brick mausoleums, interacting with some unseen force. The man from the bench continues to watch quietly, following them at a distance.

“I didn’t want them to think I thought they were weird, so I didn’t want to stare,” he confides, introducing himself as Tim Murnane, a frequent habitué of Savannah’s public parks.

Now that he’s been educated about the group, Murnane’s fascination grows, and a discussion ensues on the nature of performance and the role of audience, and whether those conventional definitions hold up under scrutiny.

“Art is an agreement between the artist and the beholder,” muses Murdane as he watches the women paddleturn their way along the oyster shell walkway.

“But you can be your own beholder... wait, I think I get this! We are each the subject and the object, at the same time!” he exclaims.

He does get it.

“It breaks down the barrier between the spectator and the performer,” affirms Brea Cali, Savannah Dance Festival Executive Director and occasional SMAP collaborator.

“You find yourself engaged in the narrative, and it opens up all kinds of possibilities for internal examination.”

That inner experience is as much the point of SMAP as the physical movement itself. Kaylo brings her decades as a teacher of somatics to the project, applying the notion that the way we move informs the way we think and feel.

The practice of somatics is less about exercise than it is a form of mindfulness that increases and refines “proprioceptive” cognition—that is, how one relates to the world around him or her.

Not just limited to the dance realm, somatic techniques are employed in Pilates, massage, psychotherapy and spiritual practices, allowing participants to command a deeper and more genuine understanding of the present moment.

At this point in time, the three women in black and purple are gearing up for a climatic finish, their movements becoming more staccato, legs kicking wildly under the tree canopy. Then, by some unheard signal, they drop their arms and walk in a line.

They cross the threshold of the cemetery’s iron gate and return to the ordinary day, melding into a small crowd gathered at the bus stop.

They will be back at dusk, ready to pique imaginations and see where the moment takes them.