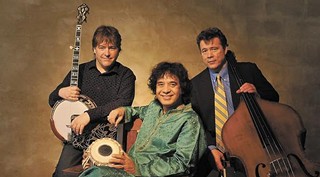 From left: Fleck, Hussain, Meyer. "In the end," says Fleck, "it works because everybody is really coming at it on a very high level, musically, and also with a desire for it to be cohesive and warm."

In 30–plus years of interviewing musicians, I can name a half–dozen who are always a pleasure to speak with – they’re forthcoming, funny, thoughtful and seem to truly enjoy exposition and the old back–and–forth, with some journalist they’ve never actually met on the other end of the phone.

Béla Fleck may be on the top of that list. This was perhaps my fourth conversation with the composer, Flecktones bandleader and master of the jazz banjo, and he’s never been anything less than a wonderful interview.

Fleck, Meyer and Hussain will play their joint composition The Melody of Rhythm, which was commissioned for the opening of a new concert hall in Nashville, and subsequently recorded for CD with the Detroit Symphony.

The music – as with everything Fleck’s done since his bluegrass days with New Grass Revival – is genre–defying, incorporating elements of classical music, Gypsy jazz, Appalachian and Indian music. And more.

The highly skilled trio will perform The Melody of Rhythm without an orchestra, and their show will include other compositions as well.

This is an abridged version of the interview, which got very technical at times, for your reading pleasure.

You and Edgar decided to make this new composition a triple concerto. How did you come to bring in Zakir?

Béla Fleck: We were looking for a collaborator that would make it impossible for us to turn down. We had a very short list, and Zakir was at the top of it. Luckily, the orchestra leaders agreed that he would be a great choice. Both Edgar and I have wanted to collaborate with Zakir forever, because we’ve been fans of his since the Shakti days – that sort of opened up our minds to who he was, and a lot of people learned about Indian music through him and Shakti. And then followed him into traditional Indian music, and his other projects.

How do you start a composition like this? Is it tabula rasa at the beginning – we can go anywhere?

Béla Fleck: You start out thinking anything is possible, and then you gradually work into “What would be best?” As you get near the end, you often become pragmatic – when you hit your time deadline, that’s when you have to start to make choices. Often the best choices for the pieces, but you weren’t ready to make ‘em until now.

The truth is, whenever the three of us were in a room, we worked very quickly. Nobody would ever say “I can’t do that.” Everybody would say “Wow, I’m going to find a way how to do that. That’ll be great. That’ll be what I’ll learn how to do on this project, I’ve never done that before.” And get excited about it.

Percussion–wise, aren’t there limitations to what you can get out of tabla?

So the bass, the banjo and the tabla all have the things that they naturally do, and the things they do that we’ve all learned they don’t naturally do, and so that’s the palette that we have to draw from. Just because the banjo can’t be a violin doesn’t mean it’s not a success; it’s a great success at being a banjo. My job is to get as many colors out of it as possible. And that’s what Edgar does, and that’s what Zakir does.

Live performance, and the thrill of improvisation, is so much a part of what you do. So I wonder ... why do you make records at all?

Béla Fleck: There’s a lot of great reasons to make records. One is that it’s a way to hear back what’s going on, and compose. And improve the composition. In other words, when we went in to record this music we hadn’t been touring it for a long time. We had to listen to it and figure out what would make it good. First, you’re striving and striving to get something that’s good to put on a record, that you’re proud of. But as you listen to that again and again, and getting to know it, now you’re starting that song on a whole new level.

So how has the concerto changed since the recording?

Béla Fleck: The concerto is set; the only person that improvises with the concerto is Zakir, because he has an open cadenza and he’s able to play the form without playing the exact same thing. But on the other music, we’re all improvising constantly. And even if you play a great improvisation one night, you can’t play the same one the next night. You have to take it to the next level.

I know exactly why you were asking. It’s sort of a little too convenient to go “Hey, the old model is gone, so there’s no point in making records any more,” because there’s a lot of great things about records far beyond the idea of selling them.

To me, it’s a critical piece of the composition process that shouldn’t go away ... whether they sell or not. Because it’s making the music better.

Every album I do, if I can’t commit to a good year of performing it live, I tend to be very suspicious of doing it. It’s not a matter of promoting it because it will sell more – some of them sell great, some of them don’t sell great – it’s about showing the audience my commitment to that music.

For those reading this and wondering ... how and why do banjo, bass and tabla work together?

Béla Fleck: The reason it works is because of the people who are playing them. And I hate to talk about it in terms of myself, because I’m not the person who should be talking about myself, but I can talk about those two guys. Edgar and Zakir are staggering musicians, whatever instrument they happen to play. I would have to say that most of the things they do tend to work ... if Edgar’s going to be committed to playing something, he’s going to use all his wherewithal, his composition skills, his playing ability and a lot of thought power, to make it work. And he’s a great composer.

Zakir is exactly the same. He’s going to put that thing he has into it, and it’s going to work because he’s such a brilliant musician.

I think in the end, it works because everybody is really coming at it on a very high level, musically, and also with a desire for it to be cohesive and warm.

Pressing the point, I think some people will read about those three disparate instruments together and wonder whether it’s like a triangle, a wax paper comb and a theremin ...

Béla Fleck: Right. You see it on television, somebody playing a glass with their hands ... a gimmicky thing. And sometimes it’s like “Let’s just put all these crazy things together – people will come out and see it because it sounds so odd.” Or “That sounds intriguing – I’ll have to go see it!”

I’ve gotten a lot of that over the years because I play the banjo. “He’s playing jazz banjo! Would I even like that? I don’t know, but it’s interesting – let’s go check it out.”

It’s my job to deliver something meaningful when they show up, so that the gimmicky–ness is actually to some positive end. It’s not that the gimmick of the Drumitar in the Flecktones, or Victor flipping the bass, or me playing electric banjo, has to be a bad thing if the music we’re playing has some worth. I always try to address myself to the music I’m playing having some worth. Then I can be committed to it and stand behind it, and when people come see me they’ll know that at least I’m playing something I believe in.

In Savannah, You’re also performing with the pianist Marcus Roberts. Tell me about that.

Béla Fleck: It’s a one–time thing so far, but who knows where it’s gonna go? I actually met him in Savannah several years ago, when I was playing there with Abigail Washburn and the Sparrow Quartet. There was a jam session I was invited to, and I went, and Marcus was there. We ended up playing a few tunes together – I’ve always been a huge Marcus Roberts fan, and I found him to be much more open to me, more than I was expecting.

The idea came up of Edgar, Zakir and I all doing outside projects, as well as the trio, at the festival this year. So I’ve already been down to Florida and practiced with him for a couple of days, and it was really fun. I’m very excited about it.

I understand you’re working on a solo banjo concerto, and there’s a new Flecktones record on the way?

Béla Fleck: The concerto is quite a challenge; I have about 30 percent of it done. It premieres in Nashville in September. But I have to finish it now.

The big project last fall was recording with the original Flecktones lineup, with Howard Levy, the harmonica player, back in the band. The new record is very esoteric – I like the idea of esoteric with warmth and joy. Not an esoterica that pushes you away but is intriguing, and has enough earthy elements to make the whole thing work.

As soon as we get done with this run with Edgar and Zakir, the Flecktones are going to go back into action, in late May.

Next year, Edgar and Zakir and I may do some touring in the Far East and India. Maybe with another collaborator. We definitely want to keep it alive.

“The Face of the Bass: Edgar Meyer”