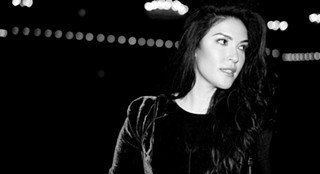 This past January 17, Kristina Train received an unexpected happy-birthday call. It was Bruce Springsteen, who'd sought her out because her 2013 album, Dark Black, was one of his current favorites. The two had never met, although Springsteen had been praising Train's richly soulful voice in interviews— "very Dusty Springfield," he'd said.

They talked for a while about their shared love of classic rock and soul music.

It was a particularly gratifying exchange, out of the blue like that, because Dark Black was a comeback record, of sorts, for the Savannah-reared vocalist.

EMI, Blue Note’s parent company, was imploding. Entire A&R and promotion staffs were axed in a single day and as a result, the album all but disappeared.

Train, however, did not cry over Spilt Milk.

“It was a great learning experience as my first album,” she says. “When everything collapsed over at EMI, it was a big blow. Everybody that I knew there was gone. The whole company changed. Everything stopped.

“But as they say in the South, everything happens for a reason. You just have to double down and keep moving forward, no matter what.”

The loss of her Blue Note contract was followed, in quick succession, by a couple of serious upsets in her private life.

“I just really wanted to have the career,” explains Train. “This is the only thing that I know how to do, and I thought passionately that this is what I should be doing. So when all that happened it was scary, but it also made me realize that I had to figure out how to make it work.”

The first ray of light came from jazz legend Herbie Hancock, who was looking for a vocalist to join his band as they toured behind the Grammy-winning River: The Joni Letters, a sonic exploration of songs by Joni Mitchell.

“If I hadn’t made Spilt Milk, and it hadn’t reached his ears, I wouldn’t have been able to tour two years around the world with him,” Train says, “and have the greatest musical education of my life.”

Mitchell had been a major influence on young Kristina, growing up in Savannah. Hancock also utilized her violin talents, which she’d honed as a young member of the Savannah Civic Orchestra.

“It was a great fit,” beams Train. “It was really incredible and mystifying for me to stand on that stage and sing with Herbie Hancock, but also sing one of my all-time favorite musician’s songs. It was a very surreal moment for me.”

Mostly self-penned, Dark Black came out on Mercury Records. “If you aren’t in love with Train’s voice by the end ... there is something seriously wrong with your ears,” raved the Huffington Post.

“The sound may be 21st century —she’s certainly not retro—but while her multi-layered richness takes her beyond genre, her emotion and believability indicate soul at its deepest and most timeless,” said the BBC.

“That was my way of getting through that, I’m through it, it’s all good now. And my greatest hope is that anybody who can connect with something like that will find it healing as well.”

She bristled at the reviews that went into detail about her personal travails. “Look, it’s life, you know?” she says. “You grow up. The first album was wonderful because I had absolutely no idea what I was getting into. It was my first time, the beautiful bliss of making an album. I hear that when I listen to those recordings—on the rare occasion that I do listen to them.

“The second album was extremely different. I was a fully-grown woman. I had lived life, I had experienced love and loss, and personal tragedy. And certainly after two years on the road with Herbie Hancock, I had a very, very clear vision of what I wanted to do musically.”

Train lives in London now, as arts-friendly a city as she has ever known.

There was another reason for the move, she explains. “You’re able to have everything that a big city has to offer, yet you can really hide away. It feels like a village. It was also somewhere for me to go where I had a completely fresh start. Nobody knew what was going on with me personally, I could be somebody else for a while. I could lose all the heaviness of the life lessons that had happened in the years previous to that. And have a clean slate.”

And then there’s Savannah. Train wasn’t born here, but those all-important teen years unfolded right in the Hostess City. Her mom still teaches at the Habersham School.

“Savannah is still in my veins; it’s part of who I am,” Train says. “I long for it when I’m away. I miss the water. The last time I was there, I fell in love with Savannah again, and I can’t wait to come back. I’m so proud and honored to be a woman of Savannah.”