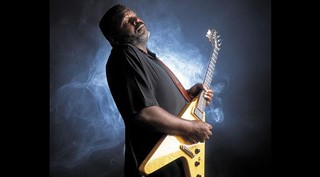 In many ways Michael Burks doesn’t fit the stereotype of a bluesman.

He’s on the young side, for one, being “only” 54 — fairly underripe by blues standards.

He was born in Milwaukee, for another, though he moved to Arkansas at a young age.

He wasn’t “born under a bad sign.” He’s had pretty much the same ups and downs most of us experience at some time or another – including a crucial mid–career change (more on that later).

In one very key way, however, he is very much like the best bluesmen: While his studio performances are very, very good, his live performances absolutely kill.

With a voice that conjures a young B.B. King and a guitar style more like Albert King’s, Burks brings his full–throated, nearly rock–style guitarwork and vocals to the Charles H. Morris Center as part of the Savannah Music Festival in a triple-bill “Delta Guitar Slingers” concert with Lucky Peterson and Sherman Robertson.

Connect Savannah is proud to sponsor the Delta Blues concert, and we spoke to Burks last week.

The story about how you learned to play the guitar is interesting. I’ve read about it second and third–hand, but I’d really like to hear it from you.

Michael Burks: I learned from my father real young. I was two years old when I first started playing. My dad had an old acoustic guitar with four strings. It was sort of a bass guitar – he took the two strings off the bottom and left the top four strings. I was learning bass runs, playing simple basslines. I started learning stuff off of 45 records. I would just play along with it, and I got real good at that.

You could say you had an interesting childhood.

Michael Burks: When I was six years old I got a little gig in a jukejoint in Arkansas. I was sitting in with a real big band, they had a 12–piece horn section and everything. That was my first shot in front of a big crowd.

Then your father started a club and you basically became the house band.

Michael Burks: I was doing my own thing. We were playing everything from R&B to funk to Jimi Hendrix to Santana. We were playing all the stuff that was popular in clubs, stuff off of the jukebox.

Then everything started changing with the disco craze and the rap craze. That sort of knocked live music out of the clubs. Being from a small town like Camden, Arkansas, there weren’t a whole lot of choices. Playing music was how I was surviving. Then with the disco/rap craze I didn’t have a job. So I had to go find a real job, and I completely quit music for 10–11 years in the early ‘80s, ‘til about 1993–94 I picked it up again.

What inspired you to pick up the guitar after such a long layoff?

Michael Burks: I was going through a divorce. My older brother was living in Atlanta and he invited me to spend the weekend with him to get away from Arkansas, to air my head out. He said, “Bring your guitar with you.” I said, “I don’t want to bring no guitar, I haven’t played in 11 years.”

So I took off to Atlanta and he took me to a place called Blind Willie’s. Chick Willis was playing – a stooped down man from Tennessee. My brother was friends with Chick and he said, “How ‘bout let my brother sit in a couple songs.” I was like, “Send me on back to Arkansas.”

Chick called me up. I did actually take an old Gibson 335 with me, all black, with so much rust on the strings I knew I’d break one the first note I hit.People went nuts. I played another song and people were climbing the walls.

I told my brother, “That’s all I want.” He said, “How long in are you in Atlanta?” and I told him I was leaving. He said, “You can’t leave! We’ll find you a job.” So I decided to start my own band, and that’s where it happened.

How did your style change after such a long time not playing?

How has the idea of the blues changed since you first started playing?

Michael Burks: Back then you just had blues. People called it different names – Delta blues, Chicago blues – but it’s still the blues. Now they got blues rock, contemporary blues rock, and all these names like that.

My style is just a style of different genres of music I grew up around. Joe Pass, Wes Montgomery, B.B. King, Albert Collins, T–Bone Walker. I actually did a three–month tour with T–Bone when I was 12. Everybody wanted to play like T–Bone. Even B.B. King wanted to play like T–Bone. But me being 12, he was just an old man to me. I was like, huh, so?

So what do you tell that young guitarist who wants to play the blues?

Michael Burks: Blues is not a machine, blues is an art, it’s history. It’s a feeling. It’s got to do with the changes a person goes through in life. And some people can’t handle the truth.

You’ve got to understand the music and feel the passion. A lot of people play blues scales, notes, chords, and say “I’m playing the blues.”

No, you’re playing the notes. Until you can play those notes with a passion and a feeling, you ain’t playing the blues