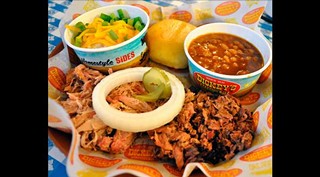 One of my foodie field operatives tipped me off to a new BBQ joint in Pooler that he claimed was worth the drive.

I didn’t have to twist his arm too hard to tag along as we steered the foodie wagon west one recent Saturday.

Dickey’s Barbecue Pit is a Texas–based franchise. Now, I’m not typically partial to corporate ’cue, but will admit that Dickey’s is going to garner some attention from folks in Pooler — and it’s worth a trip to sample for yourself.

The fast casual concept is designed by an assembly line sub sandwich place –– queue up, choose your meats, choose your sides, pay and have a seat. Beverages are self serve, you dip deep into a gallon jar for a whole dill pickle. You can soothe your sweet tooth by crafting your own soft serve ice cream cone after the meal –– free.

But let’s be honest: A barbecue restaurant has to stand on the integrity of its meats. Dickey’s uses a pair of big stainless steel Olde Hickory brand smokers from which they pull pork shoulder, ribs, beef brisket, ham, chicken, turkey and two kinds of sausage.

I chose a Two–meat Plate (any two meats, excludes ribs), that includes a nice yeasty roll, onion and sliced pickles and any two side dishes.

My two meats were chopped beef brisket and pulled pork. Each meat was moist and nicely smokey –– there was plenty of texture, taste and hickory laced satisfaction in each bite. The brisket carries a thick, jet black crust of herbs and spices that adds another layer of flavor.

My barbecue beans were standard fare –– and a generous portion. Baked Potato Casserole topped with shredded cheddar cheese and sliced green onions was a surprising combination of flavors and a genuinely satisfying, different approach to the starch side of the meal.

My friend ordered smoked turkey. That, and the brisket, were sliced in front of us. Chopped meats are sliced, then chopped fresh. His turkey was moist and, again, delightfully smokey.

No alcohol, but the self–serve beverage bar features a giant yellow cup. A kid’s menu and family packs will take care of little diners –– and those wanting a quick and easy carryout barbecue feast.