To learn more and vote on your favorite local dessert, go to gshg.org/vote

IT'S BEEN said that the best part of life starts at 40: You've established your wants, you're comfortable in your own skin, you no longer feel any need to make apologies for wearing a light dusting of toasted coconut out in public.

That last part applies particularly to Samoas, the uber-popular cookie that’s been sold by the Girl Scouts of the U.S.A. for the past four decades. Sure, Thin Mints might brag they have a better figure, but it’s those crispy caramel numbers that are being recognized as confectionary icons this week:

In honor of National Girl Scout Cookie Weekend, the Girl Scouts of Historic Georgia have invited 25 Savannah restaurants to pay homage to 40th birthday of the savvy, stripey Samoa by using them to create original desserts. The public can vote on their favorite beginning Friday, Feb, 27 through March 1 at gshg.org/vote.

For sweets purveyors like Gigi’s Cupcakes, Devil’s Food perfection comes with a cookie crown nestled atop a beehive of caramel buttercream frosting. Others have been inspired to incorporate Samoas into their existing dessert repertoire.

James Parker, the executive chef at Maxwell’s, has infused every layer of his New York cheesecake recipe with coco-caramel goodness: In the crust, in the batter and drizzled on top. He comes to this culinary challenge already well-versed in the flavor profile.

“My sisters were both Girl Scouts, and so are all of my nieces,” says Parker. “I buy around twelve to twenty boxes of Girl Scout cookies a year.”

Creative cookie appropriation is occurring in more Savannah kitchens. Chef Brandy Williamson of Daniel Reed Hospitality is working with her pastry chef at Soho South Café on a Samoa-saturated cheesecake as well, to be paired with a cream-filled Charlotte Russe that substitutes the recipe’s de rigeur ladyfingers with another Girl Scout cookie classic, the lemon-zested Savannah Smiles.

Founded over a century ago in Savannah by forward-thinking feminist Juliette Gordon Low, the Girl Scouts have been selling cookies since 1917 as a way to fund troop activities and give young girls the opportunity to participate in commerce. These days, more than 50 million people a year buy Girl Scout cookies through individual scouts and online, and the Girl Scouts of the U.S.A. has been recognized as one of the Top Ten Innovative Non-profits in the World by Fast Company.

At the heart of the “largest girl-led enterprise in the world” is the transmission of five key skills that empower the young women in green sashes: Goal setting, decision making, money management, people skills and business ethics. Every time you down another row of Dos-i-Dos, you’re helping fulfill the Girl Scout mission “of building girls of courage, confidence and character, who make the world a better place.”

“Girl Scout Cookies are about so much more than a tasty treat. They’re about teaching girls basic business skills and instilling a lifelong sense of civic responsibility that creates leaders,” says GSHS creative services manager Tara Nobles, who adds that local scouts have used cookie profits to feed the homeless, purchase supplies for the Humane Society and landscape at the Ronald McDonald House.

“I remember the smell of the campfire, and thinking, ‘hey I started this myself!’” laughs O’Connor.

For the once-shy chef, selling cookies proved a bigger challenge than creating a spark from rubbing two sticks together.

“When you first did it, you were scared. You had to knock on strangers’ doors! Then, you had to wait to be refused. But since everyone loves Girl Scout cookies, that never happened,” she says.

“It got me over the fear of the unknown.”

When Chef O’Connor found out the dessert challenge was to feature her favorite cookie, she had wild ambitions for a soufflé or equally complicated confection. But in the end, she wanted to keep the Samoa to its beautiful essence. “No reason to gild the lily,” she surmises.

Her offering is a Samoa-based bread pudding, with cookies crumbled with fresh-made biscuits and echoing the famous by adding extra dark chocolate, caramel and toasted coconut.

Like the rest of Savannah’s Samoa-inspired desserts, it will be on the menu this weekend only. Voting closes at midnight on March 1, and the winning restaurant of the cookie competition wins bragging rights and a coveted trophy. (Please note: there is no prize for trying all of 25 them.)

It’s a tasty way to say Happy Birthday to the Samoa, and if you see a troop of Girl Scouts at a cookie booth you’d better stock up on an extra box or three. They’re only available for a fleeting time, and any 40 year-old knows that’s the secret to keeping ‘em coming back for more. 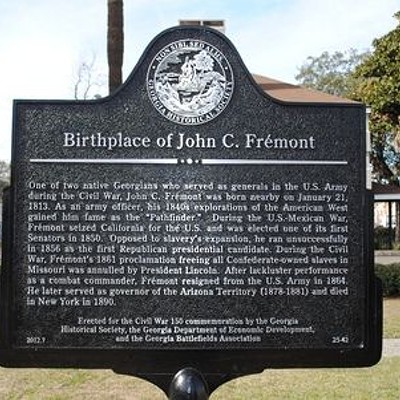