Everyone wins when local filmmakers, businesses and non-profits collaborate

Where: The Jepson Center 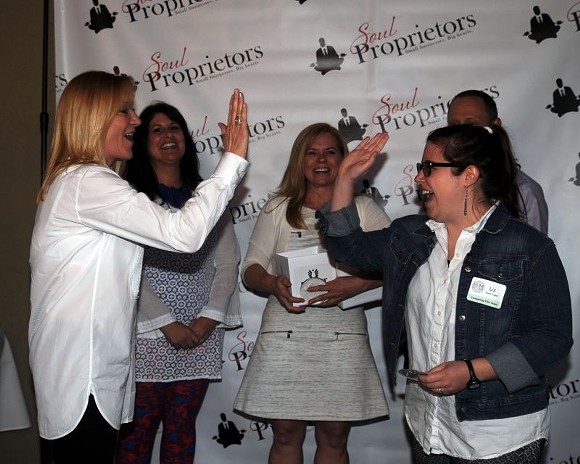 THE SKY let down a few sprinkles, but it couldn’t dampen the excitement on Cha Bella’s fairy-lit patio last Thursday night.

Three local filmmaking teams awaited the news of which small business owners they would be following around for the next five days as part of the second annual Soul Proprietors Film Competition, and they couldn’t wait to get to work. They’ll each produce a short documentary about their assigned subjects—who have already partnered with a local non-profit organization—during this homegrown contest that joyfully triangulates the concepts of creativity, capitalism and charity.

“We’ve been so excited for weeks,” said Elizabeth Kaiser, half of the wife-husband filmmaking duo MadLawMedia.

“This is exactly up our alley, we love to tell people’s stories. We did as much research as we could on all three businesses and organizations, and now we get to go deep.”

Cheers went up as MadLawMedia was paired with Fleet Feet Sports and its charity, Susan G. Komen.

“We’ve definitely already got some ideas,” assured Kaiser as she, her husband Kyle Maddux, Fleet Feet’s Cookie Espinoza and the rest of the team immediately ensconced themselves at a long table to start planning the shooting schedule, which surely included last Saturday’s Race for the Cure.

Another set of visionary spouses, Jennifer Bird and Luke McMahon, joined up with organic food purveyors Local Farm Bag’s Erik Lyons and Steve Howard to discuss their cause, Union Mission. The all-women, seriously-bespectacled crew of Kirutungo Productions retired to the upstairs deck with Meredith Sutton and Kevin Ryan of Service Brewing, who have already been raising money for the first responder support organization the 200 Club.

“We’re so ready to go with this,” Kirtungo’s Darlien Morales said of her filmmaking colleagues, Savannah Patterson, Demi Waldon and Brittany McDaniel. 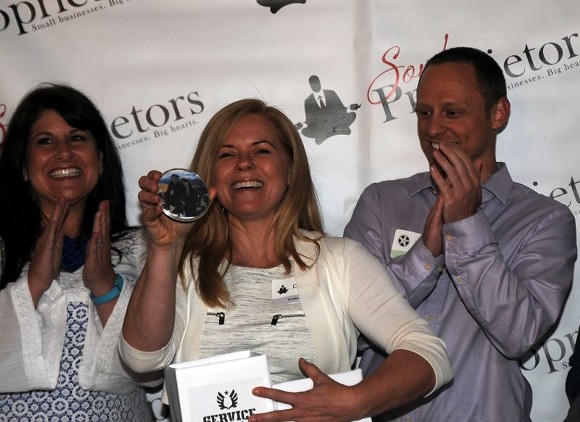 While the good works are inspiring the filmmakers, their bubbling enthusiasm might also have something to do with the fact that there’s cold, hard cash at stake: The winning film team receives $5000, second place gets $1000 and $500 goes to third—so really, there are no losers in this venture. The results will be announced immediately after the screening of all three films at the Jepson Center, Thursday, April 28. The public is invited, and all proceeds from the $10 tickets go to the charity partnered with the winning film.

As the teams decamped to their corners and supporters filled plates from the buffet of Cha Bella’s nut-encrusted salmon and perfectly-peppered shrimp-and- grits, Brannigan let out a happy sigh.

“This is so much different than last year,” confided the petite blond. “I couldn’t get anyone interested in this at all.”

The Detroit native conceived of Soul Proprietors a few years ago as a way to give back to her adopted city—and encourage visual content that celebrated good works instead of focusing on superficial celebrities.

“I wanted to see reality TV that wasn’t garbage,” she explains.

She began socking away money into a special account for the prizes, slowing building a fund. But explaining the film competition to potential sponsors proved challenging that first year. After dozens of rejections at her proposals for in-kind donations, local print shop Creative Approach offered its services to create some flyers. Then the City of Savannah’s SGTV came on board, and that boosted Brannigan’s spirit to see the event into fruition, when Hammergren’s Team Yab Yum turned its lens on the Savannah Bee Co. and raised $1000 for the Bee Cause Project.

“This event is such a ‘win-win-win’ for Savannah. It showcases the film community, the business community and the non-profit sector,” says Mark Ezra-Stokes, who served on the judging panel last year. “You have three clear niches that are passionate about the city, meeting each other and getting excited.”

Brannigan’s own reality-story reveals even deeper reasons for her benevolence. Once a teenage mom struggling as a fast-food worker making $2.85 an hour in Detroit, her situation changed forever when the manager at an engineering firm hired her to sketch three-dimensional illustrations of car parts.

“I had brought in pictures I’d drawn of koala bears and things like that,” she remembers with a laugh.

“He obviously just felt sorry for me, but at five bucks an hour it was the lowest-paying job in the place, so I guess he figured it wasn’t a huge loss.”

She excelled at the work and began picking up on the mechanics of engineering. (“This was before computers,” she reminds. “It was all desks and chairs and T-squares and triangles.”)

Because her position was low on the totem pole, she survived the automotive industry’s mass layoffs and adapted to the computer age, learning the same skills of those coming out of the country’s top engineering graduate programs. In the late 1980s, she was hired away by Boeing, becoming a rare woman in the male-dominated field of aerospace engineering. Today she works at Gulfstream and co-designed the console in the new G650.

“I guess I did all right for a high-school dropout,” she says with a grin.

Brannigan hopes to bring the Soul Proprietors Film Competition to other cities not only to re-create Savannah’s enthusiasm between local businesses, non-profits and filmmakers, but to continue the support of documentaries that inspire others to stay kind and open-hearted.

“It’s why I do this,” she says with a modest shrug.

“My life would have been completely different if it weren’t for one person’s act of compassion.”