Twenty years in the making, last week's proceeding didn't seem to clarify anything 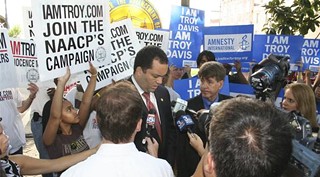 In a city with a reputation for celebrating the intersection between odd personalities and true crime drama, last week’s evidentiary hearings for Troy Davis did not disappoint.

There were remorseless convicts correcting the state’s legal team about prior arrests; wild–haired old ladies reflecting out loud (to no one in particular) about the distant past; tense moments implicating possible police malfeasance; and a court room audience that did not hesitate to emote audibly as various witnesses were questioned.

“We don’t usually have this much excitement in the courtroom,” I overheard a member of the court staff say while waiting for Wednesday morning’s session to convene.

It was expected to be a circus – after all, the case has grown from local tragedy to international controversy over the last few years. The Pope and the French government, among others, have even taken sides.

Media, special interest groups and curious observers all gathered to catch a glimpse of the proceedings.
In front of the court house dozens of high school and college students gathered to assist Amnesty International and the NAACP with a rally, waving signs, chanting and passing out fliers. The atmosphere was electric.

At 5:30 Wednesday morning my phone buzzed.

“I’m standing in line at the court house. Where are you? You’d better get here now. There are 90 spots. About 70 here,” read two text messages from Terry Benedict, a filmmaker working on a documentary about the Troy Davis case who I’d met several years earlier, after he’d read an article I wrote about the case.

I’ve followed the Davis case closely for the last several years – from conducting interviews to digging through newspaper archives and reporting on rallies at the state capital – but just like everyone else present that morning, I had no idea what was going to happen.

With the sun just starting its daily ascent I ran out the door to go wait in line for a seat in the court room – three and a half hours before the start of the day’s unprecedented evidentiary hearing.

This wasn’t just another day for the judiciary – it was the dramatic–albeit–legally–awkward culmination of more than a decade’s worth of appeals from Davis’s defense team, including multiple stays of execution, one of which came within hours of his being put to death.

In the most recent development a 4–3 loss in the Georgia Supreme Court had led the U.S. Supreme Court to order an evidentiary hearing at the District Court in Savannah to “receive testimony and make findings of fact as to whether evidence that could have been obtained at the time of trial clearly establishes innocence.”

It seemed like Davis’s defense team would need to do more than establish reasonable doubt.

Although there have been more than 100 death row inmates exonerated since the death penalty was re–instated in the 1970s, many of those overturned cases have stemmed from physical evidence – DNA samples or previously unseen video tapes.

When Davis was convicted for the August 1989 murder of MacPhail, it was based solely off the eyewitness testimony of nine people. The lack of physical evidence has been a cornerstone of the argument to have an evidentiary hearing, according to Davis supporters.

Over the last decade, seven of the nine witnesses have recanted their trial testimony, saying they weren’t as certain as they once were; that they had been coerced by police or intimated by the threat of retribution from another potential suspect, Sylvester “Red” Coles.

For this reason, the appeals that have kept Davis alive up to this point have hinged more often on procedural issues than they have on central idea of reasonable doubt. The burden of proof is no longer innocent until proven guilty, but now guilty until proven innocent.

Whatever the result, which is expected in late July or early August, if the decision is against Davis, responsibility will rest on his defense team and the choices they made during the hearing.

Their strategy was two–fold, create doubt by formally introducing the recantations collected over the last decade or more, and direct suspicion toward Coles, who had been seen with a gun that night and had a reputation for violent behavior.
The testimony of several witnesses for the defense stated that Coles had admitted to them that he had pulled the trigger.

Their stories drew objections from the state as hearsay.

Judge Moore, who presided over the hearing, said he would allow the witnesses to continue, but would treat their testimony as suspicious, giving it little, if any, consideration. He also asked Davis’s legal team why they hadn’t actually subpoenaed Coles to be at the hearing, and told them that if they had done so, he might have been more willing to accept the stories from their other witnesses.

As testimony from the state’s witnesses proceeded, however, it became clear that much of the investigation leading to the arrest of Davis had also relied on hearsay – the police were told by someone that supposedly heard Davis say he’d done it – and after an objection to hearsay from a member of Davis’s legal team, Moore reminded them that “what is good for the goose is good for the gander.”

The final briefs from each side are due to the judge by July 7, and Moore will then review all the materials again before drawing any conclusions.

One of the big questions remains what the implications of his judgment will be – whether he will simply report findings back to the Supreme Court as would be indicated by their ruling from last year, or whether he might simply conclude the evidence presented does not merit further review by the nation’s high court.

Presumably, if the judge finds that the evidence isn’t compelling enough to overturn the death sentence, then Davis will indeed be executed. However, if the results favor Davis, it doesn’t necessarily mean that he will go free.

In his dissenting opinion against last year’s ruling, Supreme Court Justice Anton Scalia pointed out that “it would be impossible for the district court to grant any relief,” because of limitations to the powers of federal courts over state court decisions put in place by the Anti–Terrorism and Effective Death Penalty Act (a Clinton administration response to the Oklahoma City bombings aimed at expediting the appeals process for capital cases).

Scalia seems to argue that it is actually constitutional to put an innocent man to death so long as he’s had a fair trial.

“This Court has never held that the Constitution forbids the execution of a convicted defendant who has had a full and fair trial but is later able to convince a habeas court that he is 'actually' innocent,” writes Scalia. “We have repeatedly left that question unresolved, while expressing considerable doubt that any claim based on alleged 'actual innocence' is constitutionally cognizable.”

From a judiciary standpoint, it’s this counter–intuitive position that is the heart of the problem with this case, and the justice system – since his conviction in 1991 the appeals process hasn’t actually been about whether or not Davis might be innocent, and now 20 years later, the facts are so murky that no one but Davis and Coles will probably ever know what really happened.

Last week’s hearing was supposed to change that, but if the gauge of success was establishing clarity, the results were less than satisfactory. Even with all the preparation, when the hearing concluded, the facts seemed more obscured than ever – twisted up by two days of contradictory testimonies that never really answered the only real question left. Who did it?

Although the defense team had been arguing for a hearing like this since they took over the case, if the atmosphere after last Thursday was any implication, they seemed to be wishing they could have a second chance.

It’s still far from over though. From last minute stays of execution to the truly bizarre circumstances of the Supreme Court ruling – to expect the unexpected is the only consistent precedent.

Now, like so many appeals before, everyone will wait to see what the judge decides.