‘We’re bringing all of our branding and imagery together in a more uniform way. We want it to really pop on the shelf,’ says Southbound’s Smith Matthews.

SOUTHBOUND BREWING CO. opened in May of 2013 as Savannah's first production brewery. Now approaching its two-year anniversary, Southbound is making a big impact not only on the local beer scene, but also on the environment with a new line of highly recycled aluminum cans.

Aluminum can recycling is one of the easiest and most accessible methods of metal recycling. Unfortunately, putting highly recycled aluminum back into new cans isn’t common practice.

Novelis, the world’s largest recycler of aluminum, has created a product called evercan to change that trend, and Southbound is its latest brewery client.

Novelis evercan is the only certified highly recycled aluminum can sheet. Ninety percent of the metal in the sides of the can is made from recycled material. As aluminum is infinitely recyclable, it contributes to a sustainable “closed loop” of resource management. In comparison, traditional cans use on average of up to 50 percent recycled content.

The partnership between Southbound and Novelis was announced at the Craft Brewers Conference on April 14. Southbound joins Atlanta breweries Red Hare and Red Brick as the first evercan users. It was Roger Davis, owner of Red Hare Brewing Co., who made the introduction between Novelis and Southbound.

Southbound founder and head brewer Smith Matthews says, ”It’s a natural fit for us as a couple and our industry in general.”

Southbound’s Hop’lin IPA and Scattered Sun Belgian Wit are Southbound’s first releases in the evercan format and are available in stores now.

“We’ve always been interested in the idea of sustainable energy and resources,” says Matthews, citing the fact that Southbound donates its spent grains to Bethesda Academy for cattle feed.

“Using recycled material is actually saving us a little bit of money so it’s a win-win.” says Matthews. While the savings is modest, described as “just by a hair of a penny,” there were bigger themes at play than just the bottom line.

Matthews elaborates, “What’s appealing to us is that they are recycled, which is using a sustainable resource.”

But he adds that smaller business can be challenged when dealing with the mega-players in the can production game.

“It becomes difficult for small breweries like us to really get the attention that we deserve or would like to see,” says Matthews.

He describes the relationship with Novelis as quite different compared to the dynamic with their first can provider.

“The process has been the exact opposite. They’re starting up this new division of their company which is kind of like us being a new brewery in this industry. It was fast, convenient, everything about it was excellent.”

For consumers, there’s no difference in the Novelis evercan and traditional aluminum cans. Matthews affirms, “It is the exact same can. Same exact specs. Same lid, same lining, same everything. So the beer is going to taste the exact same.”

One thing that Southbound buyers will definitely notice about the new can is the new graphic design.

Matthews says, “Up until this point we’ve done all of our own branding in house. We still work with artist Beka Butts, a SCAD graduate, but we’ve been doing everything on a startup budget.”

The sharp new can graphics were designed by H2O Creative in Brunswick.

“We’re bringing all of our branding and imagery together in a more uniform way. We want it to really pop on the shelf. It’s really cool and fun and gives you something to look at,” says Matthews.

Along with the new can materials, branding overhaul and territory growth, Matthews sees more changes in the near future. That includes increased focus on Southbound’s carbon footprint.

He is heavily invested and in negotiations with a solar power company to put 200 solar panels on the brewery roof with a goal to provide 80 percent of the brewery’s power needs. Matthews compares it to “taking 20 cars off the street.”

There are also new beers scheduled to hit the market, like the creative and delicious Transilience Imperial Berliner Weiss, brewed with pomegranate and mango.

The brewery has almost 20 full and part time employees and more are expected to join its ranks soon to help fill the needs of the Atlanta market.

And by year’s end, three new 90 barrel tanks will be added to the brewery, taking production capacity up to 9,500 barrels per year.

Once those are in place, there will be room for one more tank and then Southbound will look to build out on its existing footprint.

But before then, Southbound plans to look back on two years of growth and success with an anniversary party on May 22. The event includes music from The Heavy Pets and specially brewed re-releases of retired beers like Iron Lion and Big Bad Cascade Brown. For more info visit SouthboundBrewingCo.com 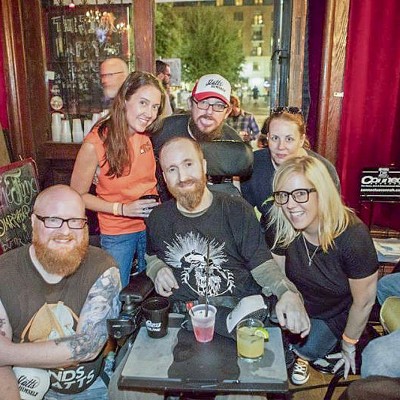