IT'S A sunny Thursday afternoon, and Lisa Ocampo and Tiffany O’Brien are hanging out in their favorite place: Bonaventure Cemetery.

“Victorians were cool,” says Ocampo. “This is what they did after church every Sunday: came and picnicked in the cemetery.”

“We were born in the wrong era,” sighs Ocampo.

It should be no surprise, based on their artwork, that Ocampo and O’Brien like to hang out in the cemetery. Both their painting styles toe the line between super-sweet and slightly creepy.

“I call our style ‘pop surreal Southern Gothic narrative,’” says Ocampo. “A lot of them are stories—you get put right into it.”

“I’m not painting every scene dripping with moss, but being Southerners, you have certain ideals; you feel it,” adds O’Brien. 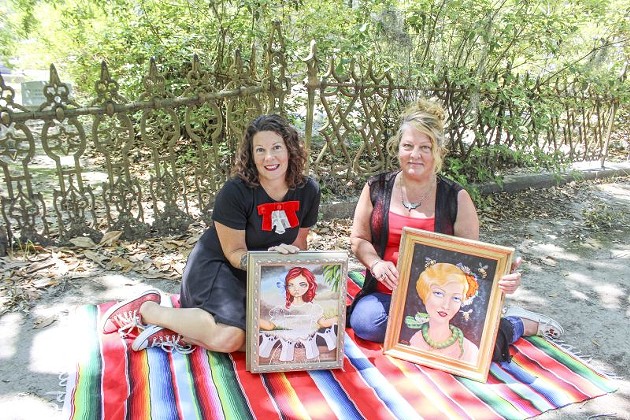 Ocampo and O’Brien are as Southern Gothic as it gets. Born in a house on a dirt road in Winston-Salem, North Carolina, they’re steeped in Southern tradition.

Their father, Thomas Luper, who’s still in Winston, is an artist of all media and inspired his daughters’ love of painting. Ocampo has memories of sitting with her dad at a table while he was painting.

“He’s colorblind, so he was painting mostly with tester paints out of the little glass bottles, and he had shoeboxes full of them,” remembers Ocampo. “He’d go, ‘Lisa, I need a sky blue,’ so I’d go in there and look for sky blue. That’s when I was little, so he’d go, ‘Are you sure this is sky blue?’”

Their family is so artistic that even at family gatherings, before dinner, someone will inexplicably pull out a sketchbook or coloring book and complete a page—“even the spouses who could care nothing about it,” adds Ocampo. “They have to do it.”

Luper’s style of painting is described by his daughters as reminiscent of Andrew Wyeth, and he relied heavily on reference photos.

Growing up, O’Brien thought that she had to paint the same way her dad did.

“I thought I was just supposed to paint what Dad painted,” says O’Brien. “I didn’t know about painting crazy stuff out of your head. I used to paint boats and barns. Why? I could care less about a boat and a barn, but that’s what Dad was doing, so that’s what I did.”

But then in her early twenties, O’Brien attended a paint party with a friend, where he showed her Juxtapoz Magazine. The wild styles she saw in its pages inspired her to break out of her comfort zone and paint out of her head.

"Under Siege" by Lisa Ocampo.

For her part, Ocampo was doing that back when she was little.

“I put crowns and horns on everything, but you lose that. ‘Oh, you don’t put horns on people,’ so then it goes into more realistic,” she says.

But Ocampo and O’Brien didn’t start painting in their similar style together—they actually developed it while they apart.

They didn’t talk for years—but not, as they both rush to assert, because they were mad at each other. The sisters are eight years apart, so when Ocampo moved away to Atlanta in her late teens, O’Brien was young, and they didn’t enjoy an adult relationship until later.

Up in Atlanta, Ocampo painted murals and on wood and furniture. When she saw her younger sister’s work years later, she was blown away.

“She was the only one doing that, and I was like, ‘Oh, my gosh, I really like that! If she can do that, I’m doing it too!’” remembers Ocampo.

Now, their art is so similar that people confuse their pieces fairly often.

“Or they’ll be like, ‘I saw your work at so-and-so but I didn’t see you,’ and I’m like, ‘That was my sister Tiffany,’” adds Ocampo. “I have no problem being compared to hers, but I’m like, ‘Really? We look nothing alike!’ We don’t paint the same.”

“There’s nobody I know [that paints like this], so when they see it, they just know us as one person,” says O’Brien.

The sisters each ended up in this area by a bit of chance. Ocampo lived near Atlanta but loved vacationing in Savannah so much she’d drive down just to eat at a local restaurant.

“It was kind of the gypsy move of, ‘I’m putting the house up for sale when we get back. Y’all with me or not?’” recalls Ocampo.

A few years later, O’Brien and her husband, based in the Big Apple, sought out warmer weather than New York could provide.

“We always wanted to live at a beach, and I had a sister that lives in Savannah,” says O’Brien.

Now, with Ocampo and O’Brien here for 13 and six years respectively, they’re regulars in the local art scene. 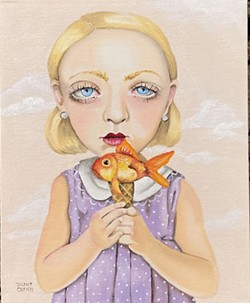 Ocampo works at the Telfair, though that is currently on hold due to the pandemic. O’Brien is starting work at the Tybee Cottage Art Gallery and is also selling art at GCD Home Furnishings.

In July, they were slated to do a joint show in Winston-Salem called “Scary Things,” which would have been a painting and poetry show that featured about 12 works from each painter.

One of Ocampo’s paintings set to be in the show was “Under Siege,” depicting the Statue of Liberty in a mask. She originally painted it in response to the pandemic, but it ended up fitting perfectly for the show.

“I just pulled out a canvas and decided to paint what I was feeling: the fear of gloves and masks and viruses floating around,” she remembers. “By the time I finished, it would fit in the ‘Scary Things’ show because nothing is more scary than this.”

Now, “Under Siege” is available for purchase at Moveable Feast, the new initiative of Location Gallery that donates proceeds of art sold to buy Bull Street Taco boxes for nurses working at local hospitals. It’s a way that helps Ocampo feel better about the situation we find ourselves in.

“I don’t feel good about it, but the art helps,” says Ocampo. “It’s like a lifeline.”