Author/activist Janisse Ray rallies us to save seeds, eat fresh and keep it local 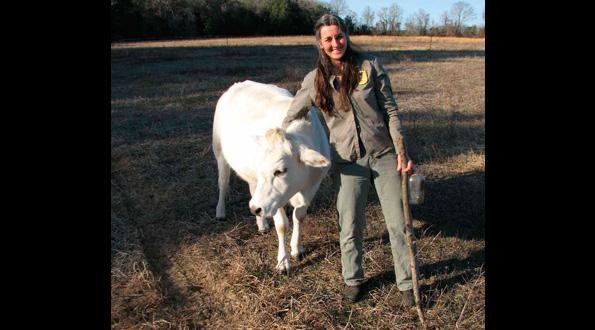 It’s what has made the progress of humankind possible: Eat something delicious from a plant. Save the seeds. Plant them. Repeat.

Our ancestors have doing this for millennia, each farmer selecting for his or her climate and preference, yielding thousands upon thousands of varieties of wheat, corn, beans and other staples of the human diet.

With the advent of industrial farming, however, the diversity of our food has diminished to just a few species—over half of of them owned by giant corporations that sue anyone who saves their laboratory–manipulated seeds to sow for another season.

Bestselling author Janisse Ray says it’s time to take our seeds back from the corporations and bring them home. Her latest book, The Seed Underground, thoughtfully examines the quiet rebellion fomenting on rural farms across the country as people pass “hand to hand” seeds from generations past, with long–forgotten names like Candy Roaster Pumpkins and Little Pink Peanut Beans.

Ray calls the practice “one of the most interesting economies in the world.”

Though she travels all over the country speaking about nature, Ray would rather be on Red Earth Farm, the 47 acres she tills with her husband on a lush delta between the Ohoopee and Altamaha rivers an hour and half west of Savannah.
Ray will lead a seed–saving workshop at the Connect co-sponsored Savannah Food Day next Sunday, Oct. 28 at Daffin Park.

You’re known as a nature writer. How did you cross into food activism?

Janisse Ray: Well, my first book, Ecology of a Cracker Childhood, appeared to be a memoir about growing up in a junkyard in south Georgia, but it was really a clarion call to protect long leaf pine forests. My second book is about rural communities, and Pinhook is about wildland corridors between Florida and South Georgia. So I think all my books have been activist in nature.

The difference is now I’m writing about agriculture, which is a big switch. But being out in the garden is what I really love to do, and I’ve been a seed saver since I was 18 years old.

Why is saving seeds revolutionary?

Janisse Ray: In the entire history of agriculture — which some say is over 70,000 years old — humans have been engaged in the cultivation of plants so we can eat better. We humans have been the caretakers of seeds and our seed supply. In the last 100 years, we’ve shrugged off that responsibility and given it to corporations whose main objective is profit. Once farmers began to go to feed stores and buy from a much smaller selection genetically modified seeds, they became the renters instead of the caretakers.

So why is saving seeds revolutionary? One, you’re opting out of the capitalist corporate system. Two, you’re actively saving genes that may become useful to us in the future.

These are gardeners who you would never see marching in the streets or holding a sign. But they are completely willing to curate 50 varieties of sweet potatoes or 300 varieties of tomato or a simply a cantaloupe that’s been in their family since their great grandparents. They’re caretaking genetic material we may need later.

We’re in a time of intense climate variability and ambivalence about what the future is going to bring. People are saying we’re at peak prosperity, peak oil, peak water—all natural resources are going to be harder to obtain. We’ve all got to look at things differently.

How has industrial agriculture contributed to the loss of food diversity?

Janisse Ray: My grandfather was a small, diversified Cracker farmer. He owned 70 acres in Appling County and managed to provide an incredible life of plenty for my mother during the Depression. When my grandfather planted corn, it was being selected for his microclimate, and the DNA profile of his corn was different from other corn.

Then there was this wholesale shift to industrial ag that was driven by the chemical manufacturing industry. We went to chemical fertilization and to the standardization of varieties, to mechanization, to choosing vegetable and fruit varieties based on shippability instead of nutritional profiles or taste. Nobody faults farmers for choosing to produce more food, but it instigated this genetic erosion that’s estimated as a 90 percent loss of our food varieties.

We’re not just losing food, right? What else?

Janisse Ray: This kind of agriculture requires a massive amount of fossil fuels and chemicals. And water.

Oh lord, SO MUCH water. It’s not sustainable long term. So that’s where we’re at.

Is sustainable agriculture — organic farming — going to feed 8 billion people? I don’t know. I’m not advocating that tomorrow we shut down all the GMOs and industrial feedlots and No. 2 corn out in the Midwest. But I do know that we need to quickly and dramatically focus our attention on local food systems. It’s the only way.

A bill that will require the labeling of genetically–modified food (GMOs) is on the ballot in California. Do you see a similar effort on a national level?

Janisse Ray: Well, 16 states have tried to pass this and it hasn’t gone anywhere yet, but we’ll find out in November what the people of California are going to do. The polls say 91 percent of California voters support the labeling, and people say how California goes, the country goes. So there could be a sea change.

But I’ll tell you, the millions and millions that food companies are pumping into the opposition could very likely kill it.

Can the seed underground bypass the corporate system?

Janisse Ray: I think we can and I think we will. I believe that seeds are part of the collective common, like water and air. This is the natural next step for the food movement: We need to understand that our seed supply is in crisis.The fact is that three multinational corporations — Monsanto, DuPont and Syngenta, a Swiss company — own over 50 percent of seeds.

I’m hanging every hat that I wear that we can regain control of our seed supply and therefore our food supply. And I believe it will be done through the small activists, like the Seed Savers Exchange and the folks in San Francisco who started a seed library. You go check out a packet of seeds, grow ‘em out, return the seeds.

When I originally used the phrase “seed underground,” I was doing it in a hopeful way. Despite the fact that that 90 percent of corn grown in this country is genetically modified, the 10 percent is out there. Are they marginalized? Yes. Infiltrated? Yes. Contaminated with GMO pollen? Yes. But those farmers are out there, and they’re growing.

The job of becoming a seed activist can get as complicated and difficult as anybody wants. The first thing is to eat real food. Then you’re not choosing for corporations to feed you with these boxes of cereals and crackers and candy and crap. That’s something all of us can do.

How do you farm and write and travel? Are you growing extra hours?

Janisse Ray: [laughs] I have to tell you, that’s the hardest part. It’s about balance. You can keep your day job and farm, it can be done. But it’s hard work. I keep telling my husband that I’d just like to stay home and farm, but I travel a lot, giving talks at universities. But that’s how we make money.

What do you talk about when you go to universities?

Janisse Ray: The students I meet are really interested in the environment. They still want to protect the right whales and they don’t want oil companies to drill in the Arctic. But I see a real fire blazing in their eyes when they talk about the food movement.

I think younger people are looking for lives that make sense, that have meaning, that are less virtual and more directly engaged with the planet. The food revolution has shown them way.

But I talk about a lot of things—sustainability, nature writing, food, the importance of wildness and the economics of what I believe is destroying life on earth. I talk about the possible solutions to this place we’ve found ourselves in, the foremost being reinvigorating local economies.

I just spoke to the Women’s Studies Department at Western Kentucky, so I was able to tie in issues of feminism with sustainability, which completely go together, trying to get a dollar circulating as many times as possible in our local communities.

You talk about transitioning from an industrial society to a sustainable one—what does that mean?

Janisse Ray: The key word in all this has to be control. When someone who’s in a headquarters many hundreds of miles away controls what you eat and whether you eat, you’re in trouble. The main focus of sustainable food is regaining control.

People are concerned enough that they’re really starting to take this seriously. They’re sick, they have cancer and diabetes and they know they want clean, healthy food. Ten years ago there were 12 farmers markets in Georgia. Now there are 200.This is a movement that’s not going to be turned back.

There’s no need to make any doomsday predictions. We’re going to change and transition and adapt. Just like seeds.