Screening of 40 Acres and a Mule

When former Tybee City Manager Diana Schleicher took the position, the city of Tybee didn’t celebrate Martin Luther King, Jr. Day, at least not the way we do now.

“The City of Tybee said that for city employees, you can take your birthday off or you can take the King Day off,” shares Julia Pearce, organizer for the TybeeMLK Parade.

Some of you know why that’s surprising: Schleicher took the position in 2004.

No, Schleicher wasn’t the Tybee City Manager in the Civil Rights-era 1960s. She began the position 16 years ago.

“It had been a national holiday for 25 years,” Pearce says. “Remember, we’re in deep southern Georgia. It was not seen as being offensive because of the way they viewed Dr. King—I guess they viewed it as a black holiday.”

“The only people who would say something like that is political is if you’re against it,” says Jan Elders, a fellow committee member. 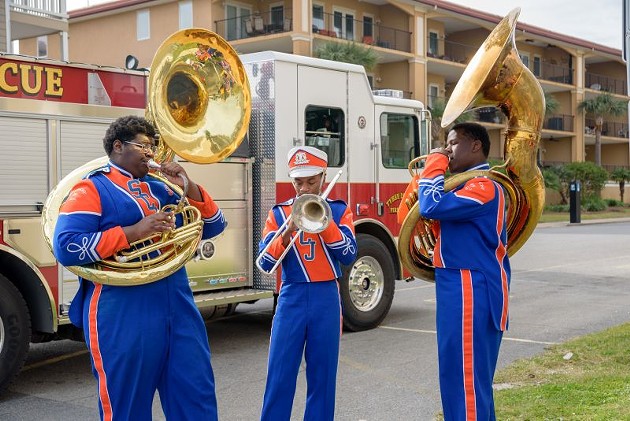 Elders is right: MLK Day isn’t a partisan issue. Rather, it’s a celebration of an important activist who deserves recognition for the work he did.

“We’re celebrating a native son who has done civil rights and human rights work,” shares Pearce. “And he was martyred—he lost his life to do that work. It’s very important that we as a nation, and we as a community, and we just as people remember the sacrifices that people have made for us.”

MLK Day celebrations have been around for years, but the TybeeMLK parade and human rights celebration is only in its seventh year. For those keeping track at home, that means Pearce and her team of organizers began the celebration just nine years after it was actually recognized by the City of Tybee as a holiday that people certainly got off.

“When we first got started, I heard someone tell me at one of the bars, ‘Julia, you don’t need your own parade,’” Pearce remembers with a laugh. “Most people associate Dr. MLK with one color, but he’s for everybody. And people forget that. We don’t forget it here. I’m the only person of dark color in our group, but that’s cool because that’s who we are—we reflect our community.”

The TybeeMLK celebration begins with a parade and finishes at the Old School Cafeteria, where the human rights forum is held. This year, the grand marshal is Richard Shinhoster of the Savannah NAACP. The Dreamer Humanitarian of the Year award goes to Rev. Dr. Jamie Maury, a priest for the homeless in Savannah and a leader of the Racial Healing Workshops.

This is the first parade since Maury, Pearce, George Anne Inglis and Beryl Brooks created the Racial Healing Forums. They began in September and consist of supper, a program or movie, and compline at the end.

“We felt that reconciliation and our commitment to standing up for human rights was so important, and we wanted to take those first steps so that people would be willing to extend themselves, because it’s a personal commitment,” explains Inglis.

An upcoming forum will include filmmakers Fritz and Lorrie Rumpel, who also host an event this weekend.

Jan. 12 marks the 155th anniversary of the meeting of government officials with African-American church leaders in Savannah. It was at this meeting that the term “40 acres and a mule” was used in regards to the land redistribution policy.

Though they grew up in Savannah, Fritz and Lorrie Rumpel had no idea that such an eventful meeting had taken place in their hometown. They happened upon that information around 2007, when Lorrie was interested in doing a play about the history of slavery in Savannah.

“We started doing research of events that happened here and came across a newspaper article online, and the actual minutes of the meeting were covered by a newspaper in February 1865,” remembers Fritz. “It was the first time in American history that the federal government had asked African Americans, ‘Well, what do you want? What do you need to sustain freedom?’”

The history just kept coming for the Rumpels, who ended up compiling ten of the most significant events around Savannah slavery into a play. But they quickly realized that a play wasn’t quite the most appropriate form to use.

“The problem with doing a play is that it’s retraumatizing,” says Lorrie. “It was just too painful for people. We realized we could do this every night.”

Of the ten significant scenes they found, Fritz and Lorrie chose the story of 40 acres and a mule as the most empowering message. They created a film out of that scene in the play, also titled “40 Acres and a Mule,” and have been passionately showing it since 2015.

Sunday’s screening is free, as always. At every screening, a thought-provoking discussion follows.

“We don’t say anything, especially if there are people in the audience who have very different experiences and perceptions. Iron sharpens iron,” says Lorrie. “One lady was talking about the maid they’d had, that they called her by her first name, and somebody else who was African-American would sort of push back a little bit. It was a very eye-opening experience, but in a kind way.”

Just like the TybeeMLK organizers, the Rumpels assert that their film is not politically affiliated.

“We don’t have any agenda; we’re not political,” says Lorrie.

“Sometimes the question of reparations does come up,” adds Fritz. “Because ultimately, they didn’t get to keep the 40 acres and a mule.”

“It would’ve been a whole different situation today if people had gotten something to start with,” says Lorrie. “I’m just talking from my experience seeing resentment towards any kind of affirmative action, or the bill HR40, where they’re looking into doing research into what all is owed. It’s been in the house since 1989. You’ve got to address it eventually, and I think it’ll be great when we do.”

This weekend’s events seek to honor and commemorate our history by bringing us together.

“It’s a great thing to be together,” says Lorrie, “to understand each other better, to appreciate each other more.”