Ghosts and goosebumps in new book 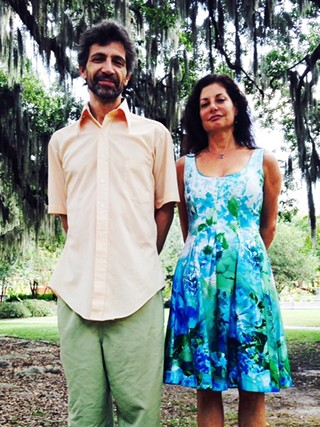 EVERY EVENING, as darkness descends in downtown Savannah, the streets begin to fill with specters.

They come from all corners of the world, perusing the shops and attractions by day but prowling the shadows at night, listening.

Some are just looking for a little spine-tingling thrill on their visit to the Hostess City. Others are seeking answers relating to parallel dimensions and beliefs about eternity.

But what most haunts these visitors to Savannah (and its locals, too) is the city’s reputation for a good ghost story.

“We’re all looking for affirmation that our souls know where to go,” muses Louis Clausi, co-author of the recently-released book Spirits of Savannah. “It’s not a ghost thing, it’s a human thing.”

Clausi knows his ghosts and their stories: He’s spent a decade as a guide with Savannah Hearse Ghost Tours, chauffeuring thousands and giving out goosebumps like candy. The seasoned raconteur of spooky tales has mined history and lore for the 16 stories that he and “co-conspiritor” Julie Lieberman present in this richly illustrated tome, launching this Friday, Sept. 12 at Le Snoot Gallery.

Clausi and Lieberman characterize Spirits of Savannah as historical fiction, combining facts and dates with personal accounts and a splash of poetic drama. But each story contains a foundation from the city’s actual chronicles, researched by Clausi as he earned his Masters’ degree from Armstrong State University earlier this year.

“I had a professor, Dr. Barbara Fertig, who always related any point in history back to what was happening in Savannah at that time,” says Clausi. “For any good ghost story, it’s history that sets the stage.”

“Louis would tell me the stories and they immediately inspired the visuals,” says Lieberman, a SCAD illustration professor and longtime believer in the supernatural.

“I’ve had a ghost following me around since I was five,” she laughs.

Lieberman and Clausi have both lived in the Thomas Square neighborhood for years, “back when it was really rough,” and she has always been deeply attracted to Savannah’s otherworldly atmosphere.

“I think I became an artist because I’m sensitive to the intrinsic and extrinsic elements of a place,” says the former New Yorker.

Strangely enough, Lieberman and Clausi circled the same neighborhoods for years in New York, but providence only brought them together in Savannah. Though they were once linked romantically, their relationship has evolved exclusively into the artistic realm.

The creative partners’ affinity for ghost stories transmogrified into the project last year, and the initial thousand copies of Spirits of Savannah were printed last month with the help of a Kickstarter fund. Those have been distributed for sale in downtown shops frequented by Savannah visitors and locals (real and ethereal), including Roots Up Gallery and Artsy’s on River Street. For ghost enthusiasts, it’s a far more meaningful souvenir than a fuzzy photo of a shadow cast by a streetlight.

Friday’s launch at Le Snoot is the first event in the digital gallery’s new space on West Duffy. The airy, open floor design will host the book signing, prints of Lieberman’s work as well as the town’s most metaphysical musicians:

Nicodemus and Anitra of Men Smash Atoms will send up the sonorous vibes along with the Baked Alaska Band, Xulu and Yonahbug—perhaps with the intention of conjuring spirits who like to dance.

As interest in the project builds, the Spirits of Savannah collaboration has extended beyond the book’s glossy pages. Clausi and Lieberman have used the words and paintings as a springboard for an interpretive multimedia extravaganza, to be performed at the end of October at the Jepson Center for the Arts.

Employing original music by Clausi, animation by digital design wizard Matthew Duplessie and contributions by local filmmakers and live performers, the show promises to bring even more life to the local undead.

In the meantime, as they entwine Savannah history with its spectral folklore, the authors invite the curious to tread into a more philosophical dimension.

While he claims no direct experience with the paranormal, Clausi believes in unlimited possibilities about how “one’s spirit can embrace the afterlife.” He points out that many cultures have rituals that allow the living to relate with the dead, and the fascination with Savannah’s ghosts may fulfill the primal urge to interact with what he calls “the great mystery.”

“We’re not trying to convince people of anything,” assures Clausi.

“People have to decide what they believe on their own.”