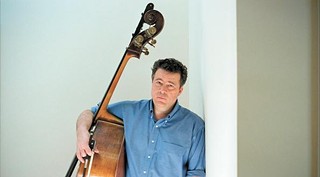 Here we have, in two separate and distinct Morris Center shows, three truly remarkable acoustic musicians who'll be acutely familiar to regular Savannah Music Festival attendees. Bass innovator Edgar Meyer's most recent appearance was in 2011, as part of a trio with Bela Fleck and Zakir Hussain (both of whom are also returning this year), and master mandolinist Mike Marshall - well, he's hardly missed a Savannah Music Festival in its 10 years of existence (it was in 2002, exactly a decade ago, that the event's name was changed from Savannah Onstage).

"I have to say, I think it's the best festival going on in America today," Marshall told Connect in 2010. "The breadth of programming Rob Gibson does, I mean that's what I'm about as a musician, and have been for 30 years: This idea that there's one thing called music, and whether it's Indian classical, or European classical, or jazz or bluegrass, or chamber music, there's a place where these things intersect musically. They intersect all over the place."

Thile, who's been present and accounted for at every edition of SMF since 2009, is a national treasure - he's a mandolin virtuoso who's young enough to care not a whit about the boundaries of genre, i.e. what his instrument can or cannot, or should not, do. Thile started at a strictly bluegrass player, as part of Nickel Creek, and in recent years has written and recorded orchestral acoustic pieces (that's not an oxymoron) as part of the ambidextrous Punch Brothers, classical music with the likes of Yo Yo Ma, jazz, pop and old-time country.

Marshall is a frequent collaborator, and one of Thile's biggest cheerleaders. "He came out of the chute bustin' and just full of energy and vigor, wanting to kick life and music in the behind," Marshall told us. "He has a tremendous sense of musicality, and an extremely big brain. And he's kinda been able to thread that needle between super-intellectual music and a kind of pop aesthetic, and a performance style that's engaging and slightly mysterious, but with a hint of down-home fun. And yet tons and tons of creativity. And that's rare."

This is a solo recital, likely to draw from each of Thile's prolific wells. "For me," Thile has said, "the joy of being alive is most acute when I'm experiencing music in some way - whether it's listening, or playing or composing."