St. Neo’s is The One

Seafood, Southern and French are highlights of Brasserie in Drayton Hotel

FOR THE past several years I’ve passed the construction at Drayton and Bay and often wondered what they were putting in place of Outback Steakhouse.

Many locals, especially those who work downtown, came to see the downtown location of Outback as a landmark of the Historic District.

Finally, the construction on the building that once housed the chain restaurant ended in 2019. Before the New Year, the Drayton Hotel opened its doors.

Now, the space is unrecognizable, but in a good way. Gone are the wood-lined booths, replaced with a modern update which honors the building’s history.

The Drayton Hotel offers a myriad of rooms, a rooftop bar, a basement bar, as well as a brand-new restaurant: St. Neo’s Brasserie. Fresh seafood, Southern inspired food, and an oyster bar are the key features of the Brasserie, a French style restaurant with a laid-back setting.

The experienced and well-traveled Executive Chef was kind enough to take time out of his new bustling schedule to answer a few questions about St. Neo’s Brasserie. 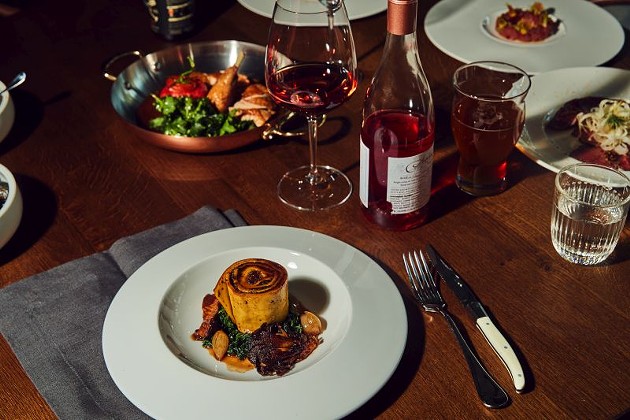 Tell me about your culinary background.

Most recently I was the executive chef at Blue Water Grill, one of the highest-grossing iconic New York City restaurants. But I’ve been working in the industry for almost 30 years now, starting as a dishwasher when I was 14 years old. I graduated from the French Culinary Institute where I studied under Jacques Pepin, Andre Soltner, Alain Sailhac. After school, I had the opportunity to work for some really amazing chefs in New York including Wayne Nish at March, Tom Colicchio at Craft, and Michael White at Vaucluse.

I traveled outside of New York for some time working for James Beard Award winners—in Sante Fe with Mark Kiffin at The Compound and in New Orleans at Gabrielle with Greg Sonnier. After returning to New York I took over as executive chef at Michelin-starred Water’s Edge. I was also chef de cuisine at Veritas, a New York Times 3 star recipient. At Veritas, I really learned how to run the operations of a kitchen from one of the best in the industry: Sam Hazen, Michelin star recipient and opening chef of Taos Las Vegas, still the highest-grossing restaurant in the country.

I partnered with Brian Ghaw to open Feast, which was included in the Michelin guide—a forty-five seat, tasting menu focused spot in the East Village. My concept with Feast was to create an atmosphere that felt like having friends over for a dinner party. And I want to bring some of that to St. Neo’s—that feeling of the neighborhood spot where you feel welcomed, comfortable and cared for.

I’m excited to be back in the South and to soak up Southern ways. I look forward to bringing what I’ve learned from all of my experiences to Savannah and St. Neo’s.

What is the aim of the St. Neo’s menu?

At its core, we really wanted to have a large focus on seafood, the raw bar and seasonal ingredients. While there are seafood options at many restaurants in Savannah, we wanted to celebrate seafood more visibly on our menus. We source almost all of our ingredients locally but [we also] do offer options such as West Coast oysters. Conceptually, St. Neo's is a seafood brasserie; dishes are approachable with preparations that range from classic to inventive. 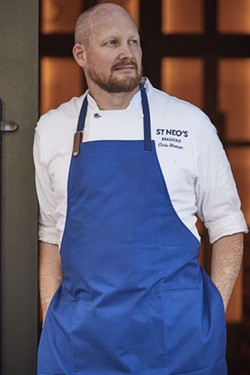 What does "with a Southern accent" mean?

We are working within the context of Southern culinary traditions. You may not see many of the traditional "Southern" dishes, but what you will see is how we are influenced by the Lowcountry as well as greater regional cooking.

Tell me your process in creating the menu.

The ingredients are really the starting point of the menu, and from there it's kind of like putting together a puzzle. I started brainstorming and doing tastings with the owner Raghav Sapra when I was still in New York.

Of course, the most important thing is that the food is delicious. And there is also the visual presentation to think of; the dishes should incorporate different sizes, colors, and shapes that make the meal a sensory experience. A menu is a complex document and each item needs to work together, every dish has to work from multiple angles; it has to fit the concept, be beautiful, easy to execute, and there has to be a balance amongst all the dishes.

Raghav is vegan and many people are experimenting more with this way of eating, so that influenced how I created the menu as well. Instead of just adding vegan or vegetarian options as an afterthought, I wanted to offer real dishes that also happen to be vegan. The Mushroom Rotolo is an example of this kind of entree and it sells just as well as some of our seafood entrees. The Midnight in the Garden —with vegetable tastings like red beet tartare—is a fun, vegetarian version of a charcuterie. It’s also very popular with our guests. 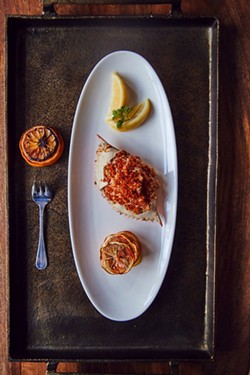 I'm obsessed with octopus but didn't think I would be able to source it down here. I was so excited when I made a local connection: Captain Charlie Phillips, owner of Sapelo Island Clam Farm. We're launching a barroom menu soon that will offer an octopus hot dog. The onion custard on the Midnight in the Garden dish highlights one of the most important local crops, Vidalia onions, and also gives a nod to a famous dish on the former occupant Outback Steakhouse's menu: the Bloomin' Onion.

Do you source any menu items locally?

Absolutely! Local ingredients are really important to us. Billy Dugger's Botanicals is just fifteen minutes from the restaurant. Access to fresh, local shrimp is something most of the country doesn't have. It's been great to be able to work with local ingredients like Bradford watermelons and collard greens that are so tender you can eat the leaf and the stem raw. We work with a few local cheesemakers like Bootleg Farms and Sweetgrass Dairy. We get swordfish from South Carolina, Geechie Boy local grits—almost everything on our menu, really.

Does the menu change? If so, how often?

The raw bar menu will change often...I love creating composed, flavored oyster dishes, it's fun to regularly switch those up. I've designed some dishes on the menu to stay the same but other dishes will change seasonally based on the availability of local ingredients.