St. Paul and the Broken Bones in a Sea Of Noise

Paul Janeway on the band’s gritty, funky sophomore record and their rapid rise to success

St. Paul and the Broken Bones

THREE YEARS AGO, St. Paul and the Broken Bones kicked off Savannah Stopover at the Knights of Columbus Hall on Liberty Street.

That now-legendary show seemed to be the unofficial launch of one of the great success stories in modern music, as the band — led by impassioned soul vocalist Paul Janeway — embarked on a series of high-profile appearances and tours, including opening two stadium shows for the Rolling Stones.

Their debut full-length album, Half the City, powered the Birmingham, Alabama-based octet to success with its horn-heavy homage to Motown and Stax style good-time soul music.

But their second album, Sea of Noise, is another type of animal: Funkier and more multilayered both sonically and lyrically, dealing with current issues such as racial and economic injustice. Think What’s Going On-era Marvin Gaye and you’re on track. Most notably the tune “I’ll Be Your Woman” — in which Janeway sings from the female POV — is an indicator of the band’s expanding sensibilities.

We spoke with the funny and engaging Janeway last week ahead of their upcoming gig at the Lucas. 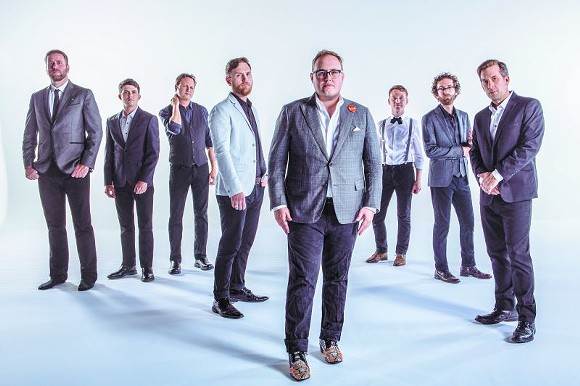 Seems like one day we were a few feet away from you at the K of C Hall during Stopover, and literally a week later you were one of the biggest bands in the world.

Paul Janeway: One of the things I vividly remember about that Savannah gig was it was the first time our tour manager was traveling with us. I think I got on top of a rolling case at some point.

It was definitely different than other gigs we’d done. Things sort of snowballed from there. I don’t know how we got here. We kinda just ended up here!

You went straight from underground darlings to opening for the Stones. That’s the definition of meteoric success.

Our whole goal previously had been to sell out 250-capacity clubs in Birmingham, Alabama. Then it seemed like all of a sudden someone with the Rolling Stones is calling. And we’re like, are they sure they got the right number? (laughs)

But we constantly feel that way, even now, you know? It’s at times like a kid in a candy shop. We just keep turning around going, oh, all right. I’ll have some more candy!

What kind of personal changes have you gone through with this success?

I’m the kind of person who just puts my head down and works. My wife says I’m not very good at sitting back and enjoying things. In my mind there’s always somebody wanting to take your spot. That’s just the competitive mentality that I have.

This second record is next-level stuff. This is much more ambitious than the first.

It’s interesting, because we’ve already started demoing the third record, which is crazy. We tour differently now, I will say that. We're not in a van with a trailer anymore, we're in a bus. You feel not as exhausted. And that's important.

Also you gotta remember we had to make that first record so quickly. This record we had a lot more time.

I knew personally when Half the City came out that next time we’d do something different. For one thing, the band is better! We’ve played so many shows together now.

So I knew the second record was going somewhere different. I kept saying to the band, “This is not going to be Half the City Part Two.” That was always the point mentally.

There is an obvious direction and vision with this new record that eventually unfolded. I remember after Half the City we recorded a song. And I wasn’t happy with it, and I said, “I’m not releasing this, this will not happen.”

We have become more confident about telling people we’re not continuously going to do the same thing. And now our audience knows that, and understands that.

So you do feel pressure to push back against the “neo-soul” or “soul revivalist” tag that music journalists always want to put on you?

I don’t feel pressure as an artist. One of the bizarre things, though, is I’m starting to see a lot more of what we do out there now. It’s really interesting.

I don’t know what category you’d really put us in. That’s always been something we’ve had to deal with.

We’re used to working with a lot of people in the Americana world, and they know that world like the back of their hand. But we’re really getting out of that. We were always a bit like a square peg in a round hole with that genre anyway.

Personally I just do what feels right. All the artists I really admire, like Prince and Tom Waits, all of them continuously evolve. I can guarantee you our third record won’t sound like this second record.

The lyrics on this record are a clear departure from the first. More politics, less love songs. Not that there’s anything wrong with love songs.

No, there’s nothing wrong with that! But you have to go with what moves you, what inspires you.

I love Half the City for what it is, and for what that record did for us. But because we recorded it so quickly, one big regret I have is I didn’t have time to think about lyrics. A lot of it is standard broken heart stuff, or “I love you, let’s dance.”

I mean I had three days to make that record. I’m like Pablo Neruda, man — I need time to think about this stuff!

Was there a particular epiphany or event which prompted you to deal with more substantial real-world issues?

My wife works in the academic world. She teaches honors classes, she teaches philosophy. She teaches a lot about justice. She’s a lot smarter than I am.

But what influenced me was the fact that I was at a weird spot. A lot of things were tugging at me. I read the book Just Mercy by Brian Stephenson. That had a profound impact. I thought, if I’m gonna keep on writing songs I’m gonna have to write about these things.

And also there’s the fact that I’m happily married! It would be such a disservice to my marriage to be writing about how my heart is so broken, when my wife is so wonderful.

If you’re someone like Tom Waits, who creates a whole world in each song, you can sing in those other voices. But I’m a very personal writer.

People are like, wow, this is a really heavy record! But I’m just writing about what moves me.

It’s funny, because Elton John sang “I’ll Be Your Woman” at a charity event. He’s like, “Why are you guys so dark?” (laughs)

Elton John recorded some pretty dark material back in the day.

I know, right? I was like, “Hey you don’t exactly sing about sunshine rays and lollipops either!” (laughs)

But he was very complimentary. He’s really funny.

Most singer/songwriters write a song on the guitar and present it to the band. But how do you do it, as a vocalist in front of a horn section?

It varies. Sometimes I just give them the melodic line. I’m basically the sixth best guitar player in the band, so it would be stupid for me to even bring one out.

It mostly has to do with the vocal melodies. Me and Jesse, our bass player, often begin things by sitting in the living room playing guitar and keys.

But at this point I’m open to anything. If one of the guys has an idea I’ll listen to it. I give everybody direction, I say, “OK this is the vision. Can you fit what you want to do into that mold?”

I really don’t think I’m any kind of a genius. So unless you really do think you’re a genius, you should always be open to other people’s creative ideas.

Sure, I guess. It is something people talk about. I identify myself as a Southerner. I’ve never lived anywhere different than Alabama. I still live here. It’s very much a part of who I am.

There are things about our state and our region that are frustrating. History, other things. But there are wonderful things too.

My whole thing is you’ve got to love people. Whether you’re talking to the janitor or to Elton John, you always treat them with respect.

That’s the way it should be done. The best way for us to represent where we’re from is to be compassionate and loving.

What’s this set in Savannah going to be like?

I think we’ll play just about every song from Sea Of Noise. We don’t want it to be a greatest hits concert, but then again we gotta play “Call Me,” we gotta play “Broken Bones & Pocket Change.”

The thing is, there were so many ballads on that first record that we sort of have to pick and choose.