'Stand Up For Kids' uses comedy for a noble cause

May 18 benefit features funny locals to benefit at risk youth

Performance Initiatives is a local not for profit organization doing some truly important work. Since 2005, they’ve bridged the gap between fitness and education to mentor young people and adults through athletics and weight lifting. PI is partnering with the Royce Learning Center to provide specialty tutors to youth who are autistic or performing below grade level, and they’re raising funds for this important partnership with a special night of comedy.

On May 18 at the American Legion Ballroom, seven notable locals will be performing comedy sets or skits alongside some of PI’s “child champions.” It’s a show that will culminate in the bestowment of the “Crack Up Crown,” won by the performer who raises the most funds. Among those who are performing include Jessica Leigh Lebos, Laiken Love, Paul Meyer and Tommy Nickoloff.

”This is something that Anne Robinson at Momentum Development Solutions came up with years ago,” Nickoloff tells Connect. “It hasn’t happened in a few years, so here we are. It’s a good time - there’s nothing stuffy about this. Sometimes we take ourselves too seriously in life, so it’s an opportunity for people to help these children out while having a good time at the Legion. It’s perfect.” 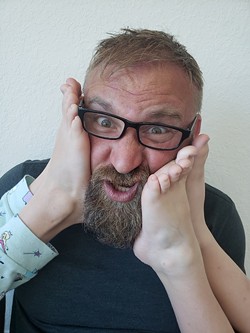 Using comedy as a force for positive change is nothing new, but this particular idea and event is, Nickoloff says, a real opportunity for the community to come together and make an impact.

”When you’re laughing, you’re letting absolutely everything else go,” he says. “You’re not worried about your credit card statement or your mortgage. We’ll just all be there, present together, having a great time for a good cause.”

He adds that there have been some generous donations from local businesses to help the cause and put on the special event, including Trisha Cook Realty, Savannah Repertory Theater, and Atkinson Consulting - for whom Nickoloff works.

Nickoloff says he’s only performed as a comedian once before, so the event will be a unique experience for him.

”There are only a few things keeping me from being a comedian, and one of them is that stand up comedy generally happens after 8:30 at night,” he says with a laugh. “By which time, I’m in bed.”

Nickoloff jokes that people often use charity events as a platform to announce that they’re running for President or launching a campaign, so he figured he’d get in on the action too - he’s throwing his hat in the ring for 2020 and announcing at the Legion on May 18.

”This is a Connect exclusive,” he says. “This is serious stuff. It’s really, really big. Earth-shattering. Groundbreaking.”