$15 online presale (available until September 20), $20 at door, free for kids under 12 accompanied by an adult

THE ANNUAL Statts Fest has become a Savannah tradition over the years, and the Friends of Statts are ready to knock 2017’s event out of the park.

This weekend, Savannahians will come together in Grayson Stadium to benefit Jason Statts, a local artist, designer, and musician who was shot point-blank in the neck in a 2008 violent crime, suffering irreparable damage to his spinal column. Funds raised from Statts Fest will provide healthcare assistance and a better quality of life for Statts.

Emily Doherty of Friends of Statts says the organization’s partnership with The Savannah Bananas and Grayson Stadium has been a fruitful one. 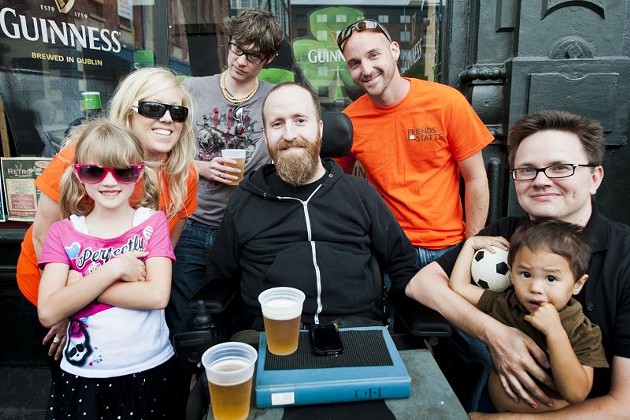 Photo by Geoff L. Johnson
Statts, center, with friends at a previous edition of Statts Fest

“Last year we took a risk at Grayson,” she says. “We were all nervous to move [the festival] beyond downtown, but the community always amazes me. So many people come out and are 100 percent behind the cause. Everyone on the board is a volunteer, and 100 perfect of the money raised goes to Jason. When you’re buying a ticket, it’s going directly to his medical costs.”

“The Savannah Bananas, the owner Jared [Orton], they have been really awesome with making Grayson Stadium available to us,” says Gil Cruz, who books the event’s live entertainment. “This year, it made sense to do it at the stadium. You can have the families, the kids’ stuff going on.”

“All of Jason’s friends have kids now,” says Doherty. “We’ve all grown up! A nighttime event is great at a bar, if we can get sitters. But it’s great to bring everyone out during the day, see old friends, meet new friends.”

Throughout the day, kids can create original works of art at the arts and crafts station, while moms with young children can put their feet up in the Relaxation Station. Scribble Art Studio will have activities ready for families, and attendees can create their own iconic Statts beard at the Build-A-Beard station. Plus, there will be plenty of hula hoops to keep the young’uns active.

Attendees can support Statts through the Statts Fest auction, too. Place your bid for a chance to win unique artwork, gift certificates for a variety of restaurants, yoga studios, and more, custom-designed jewelry, and beyond. 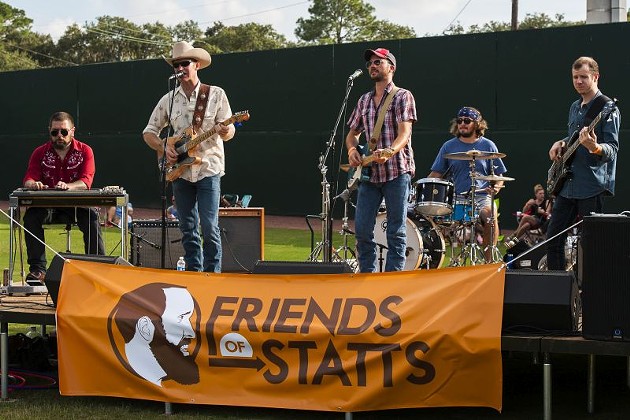 Pedal on over to Daffin Park—Savannah Bicycle Campaign is offering bike valet—and come hungry. Food trucks, including Dark Shark Taco Attack, The Squeaky Beaver poutine truck, and Kona Ice of Savannah will be slinging delicious dishes for all. Beer and wine is available, and the Bananas will donate a percentage of those proceeds to the cause.

“Don’t forget about the Statts Fest after party at The Jinx,” Cruz advises. “Donations at the door. Shoplifters are playing!”

Friends of Statts encourages the community to keep the charitable spirit going year-round.

“We have a ‘Donate’ button our website,” says Doherty. “Some people donate $10 a month, and it adds up. That’s one easy way to donate.”

Doherty and the Friends continue to be amazed at Savannah’s support.

“Anyone you tell Jason’s story to wants to be involved,” she says. “There are so many competing nonprofits, but because this is Jason, and he’s one of us, people feel close to him, whether they’ve met him or not.”