Music community gathers to support one of their own 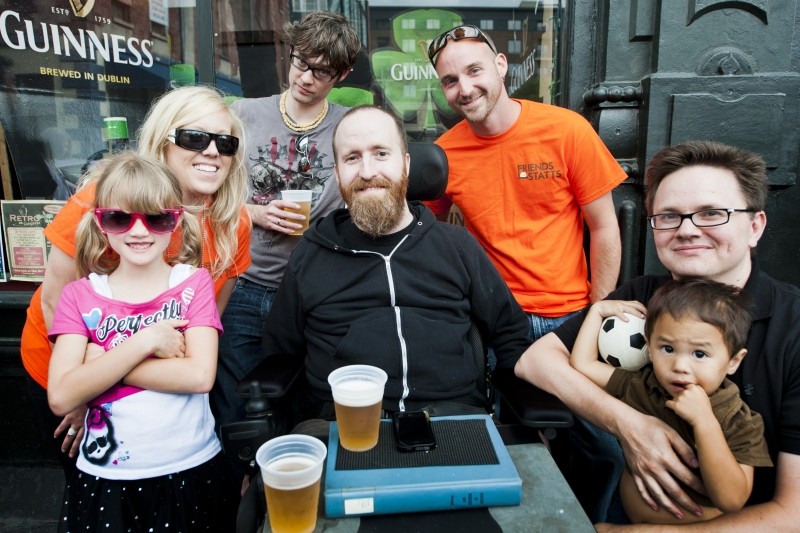 Geoff L. Johnson
A photo from the 2012 StattsFest, with Jason at center

ON June 28, 2008, Jason Statts and Dave Williams were shot in an armed robbery while unloading gear after their band, sürt {the destroyer}, played their first show.

Statts was shot in the neck; Williams in the throat. Bassist Statts was paralyzed from the chest down immediately, and Williams has one paralyzed vocal cord.

Statts has told the story many times; seven years later, he’s done rehashing that night. It’s well-documented by everyone from local publications to Decibel magazine, the heavy music Bible that published Statts’ story in his own words two years ago. Though unable to work, Statts is a gifted visual artist and writes album reviews for About Entertainment.

Time alters memories, particularly painful ones, but medical bills tower, despite government assistance. That’s why, once a year, the beloved Statts gets his own holiday: Statts Fest, a celebration of rock ‘n’ roll, art, community, and the man himself. All funds raised by Friends of Statts, an organization formed shortly after the shooting, go directly toward his medical and living expenses.

We spoke with Statts about the fest, metal, and his darkly beautiful visual art. He only gets out of the house once in a while, but he’s excited to be at The Jinx on Saturday, catching up with friends and enjoying an incredible lineup.

Statts Fest tends to come at the end of a violent summer—often, your story is told in that context. Is it taxing, living that over and over?

Jason Statts: Yeah. At this point it's been seven years, so I just want to stop telling the story, basically. If people want, they go can go back and find it. The more I tell it, the less descriptive it is...I don't know, it changes over time. It's become convoluted.

Decibel ran your story in 2013 and it blew up. What kind of opportunities did that create?

Jason Statts: I met a lot of new people in the metal community. People that read the piece were just really nice and understanding. A lot of people wrote me and told me their stories and stuff like that; it was really cool.

Is that around when you started reviewing for About's metal site?

Jason Statts: Yeah, that all came about right at the same time after [the Decibel piece] was published.

Jason Statts: I think I just wrote to About, to Chad Bowar, the editor. I said I'd like to write him some stuff, and he said okay. I sent some old reviews from when I worked for The Chronicle at SCAD; he liked some of those and let me go ahead, so that's cool.

Have you reviewed anything recently that's really stuck out to you?

Jason Statts: There's so many that come through; one thing I've been listening to a lot is called Zebras. They're really good—it's kind of like Slayer mixed with punk rock. And they don't have a bass player, they have a girl playing, like, ambient, weird noises for the bass parts and it works out really well. It's really neat.

What records do you think every fan of heavy music have in their collection?

Jason Statts: There's so much. As far as the regular things, Reign in Blood, of course. That's a hard question for me! I like so many different, weird things. Some metal people might not think I actually mean metal; I have such eclectic, weird taste, that's really hard for me. But definitely Slayer and some Metallica—old Metallica.

Jason Statts: I'm not sure when Kylesa's last record came out, but the new one's about to come out. I like how they're changing; it's more psych rock now than metal. I like that.

What kind of art have you been working on lately?

Jason Statts: It was my first day recently, and I just got a tablet, a new Wacom, and I've been painting digitally again, and that's been really fun. I just feel more inspired now—it's just fun again instead of just making marks with an iPad. I can go in and really paint.

What programs are you using?

Jason Statts: Mainly Photoshop; sometimes I'll use Illustrator to bring in certain things, if I need something to be precise. I don't have a lot of hand control still.

Is your process different, working digitally?

Jason Statts: Not really—I'm pretty old school. I still use collage type of stuff and repaint over that, or whatever I need to do.

But coming from the iPad, it’s been easy on the tablet, and I had one before I got shot, and I used it a lot. It’s relatively easy. I have a little trouble holding the pen in my hand, but I found a way, and I can actually do it with enough pressure. It’s worked out well—technology has been good.

Yeah, it’s wild how far things have come just in a few years for digital art.

Jason Statts: Yeah, I definitely got shot at the right time! (laughs)

What kind of subject matter do you find yourself gravitating toward?

Jason Statts: Same as always—I like skulls, making up weird creatures, things like that. Aliens, weird stuff. I paint pretty pictures, but I don't really care about being an artiste or anything—I like to make things I like to look at.

How long does it take to complete a painting, working on the tablet? Your work is very detailed.

Jason Statts: It's definitely a lot of pointing and clicking. I think the thing I'm working on now...it's probably been about 20 hours. I'm spending way too much time on it! It's about five by seven inches.

What is your favorite aspect of Statts Fest?

Jason Statts: I guess just the support of everyone and seeing everyone all in one day all together—that's really cool. And it's still unbelievable that people are still doing it, it's so far after the event, you know? I don't like to say accident, because it wasn't really an accident.

What does the Friends of Statts organization mean to you, personally?

Jason Statts: It's really crazy—it came about pretty much right after I got shot. I think there was one benefit that I didn't make it to, and that was the first one, and it was kind of unofficial. Then after that, the second year, that's when they came together and started Friends of Statts. It's just mind-blowing that people would even care.

What acts are you looking forward to this year at the event?

Jason Statts: Always the headliner—this year is Black Tusk, and that's cool, I love those guys. Just all day, I'm looking forward to everything and everyone.