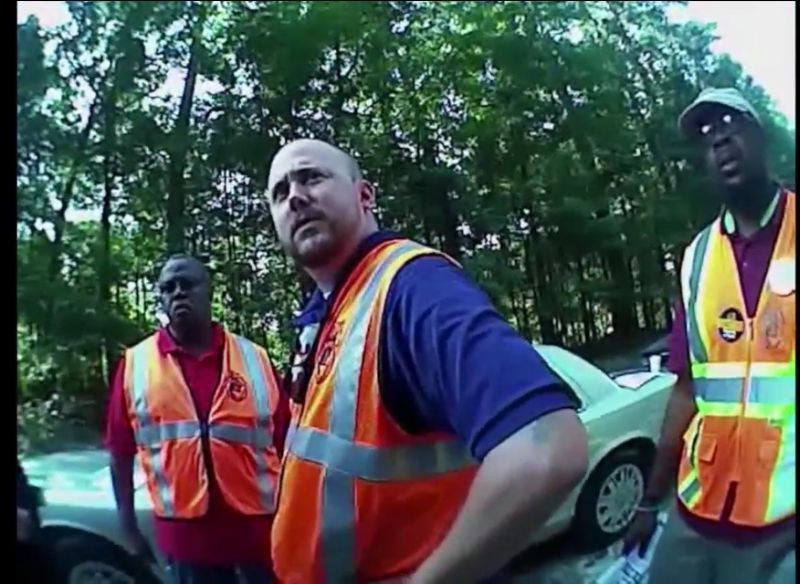 While legally attempting to inform truck drivers of their labor rights, union organizers (l. to r.)Jerome Irwin, Ben Speight and Kedrix Murray were issued questionable citations by an officer who caught the whole exchange on his bodycam.

AS A UNION organizer, Ben Speight knows exactly what the law is when it comes to handing out materials.

The Atlanta-based director of Teamsters Local 728 has been informing workers about their labor rights for years and has led a concerted effort to organize the 2,000 truck drivers who transport cargo in and out of the Port of Savannah. Drivers are currently classified as independent contractors who must pay for their own gas and other expenses, don’t receive benefits or overtime and spend up to 16 hours a day in their rigs, often referred to as “sweatshops on wheels.”

Back on June 10, Speight and fellow organizers Jerome Irwin and Kedrix Murray had stationed themselves in Port Wentworth at the public right-of-way just outside of XPO Logistics, the area’s largest trucking company with more than 150 contract drivers. As trucks slowed to a stop coming out of the gate, the Teamsters—dressed in orange vests for visibility and safety—quickly handed them a leaflet that explained the campaign and sent them on their way.

All perfectly legal under the National Labor Relations Act, and as far as Speight understood, Port Wentworth city code.

But when Port Wentworth police arrived, apparently called by someone at XPO, all three organizers were issued citations for impeding traffic as “pedestrians in the roadway”—on a street with no other vehicles and ended at the XPO gates.

“The content of the literature was obviously the problem,” said Speight, noting that the handwritten citations contained the phrase “physically handing out flyers for the union.”

The incident was captured on video by an officer’s body camera and made available to Teamsters’ attorney Michael Schoenfeld by the Freedom of Information Act earlier this month. A four-minute clip posted last week on the Huffington Post YouTube begins with a polite Speight explaining to the officer that he and his colleagues were standing on public property.

“OK, but we still have a small little technicality,” chuckles the officer. “This is the city of Port Wentworth.”

Speight goes on to ask another officer where they can go to hand out the leaflets informing truckers of their right to form a union.

The first officer, later identified as “Officer Anderson,” cuts in:

“I’m just trying to make sure we’ve got everything square. This isn’t like the 70s and 80s with the wildcat strikes and the riots and everything.”

Then he asks, “Do you smell that? Smell that?”

“No, fresh air,” says Officer Anderson. “We want to make sure everybody continues to breathe fresh air.”

When fellow organizer Irwin asks for the officer’s badge number, he replies, “You know what? We’ll settle this in court.”

To the activists and many who have viewed the video, this captures a distinctly anti-union climate in Port Wentworth, one that the city’s public servants may be enforcing illegally.

In a letter dated July 13 to Port Wentworth Deputy City Attorney Elizabeth Pavlis, Schoenfeld writes that “there is no other reasonable interpretation of Officer Anderson’s statements regarding ‘fresh air’ than that the Police Department considers union activity poison.”

Schoenfeld’s letter goes on to inform Pavlis that while his clients had not broken any laws, the officers had violated their established rights under the National Labor Relations Act and the U.S. Constitution. If the citations aren’t dropped, he continued, a suit will be filed against the Port Wentworth Police Department and the officers.

Last Wednesday, July 20, was supposed to be the Teamsters’ day in court. After the video was released, the City of Port Wentworth postponed the hearing until August 3. Speight says he and his team expect that the charges will be dismissed, given the widespread sharing of the video and an online petition that has garnered more than 1100 signatures.

Calls to the City of Port Wentworth have not been returned.

Speight expresses frustration at the efforts to stymie a trucker union in Port Wentworth but says that the support he and fellow organizers have received since the video went viral have buoyed them to continue their work.

“These drivers are being exploited,” says Speight. “We just want to give them an opportunity to be informed about their rights in a lawful way.”