The cast and crew of Savannah Children’s Theatre are no exception, and the talented team offers a musical take on Bonnie & Clyde starting this weekend.

The production will be performed by SCT’s Teen Junior Company class, a crop of 8th-12th grade students from a variety of local schools and home school programs. The class meets twice a week and puts on two productions a year. 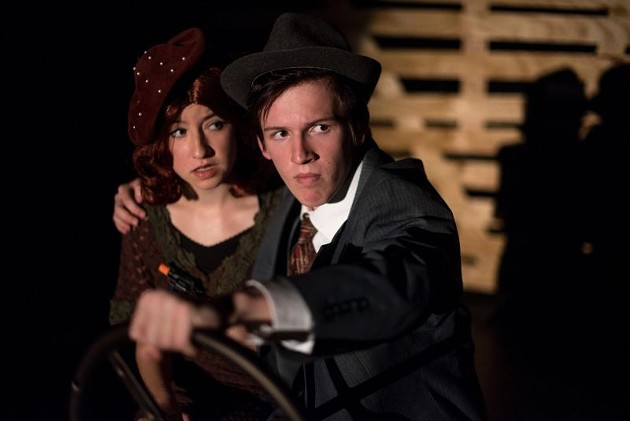 “We try to do one contemporary offering and one classical offering every year with our teens,” SCT’s Jenn Doubleday explains. “Last year, we did Addams Family and Midsummer Night’s Dream, offsetting two styles of theatre. This year, we did Peter and the Starcatchers and we’re offsetting it with Bonnie and Clyde.”

Written by Frank Wildhorn with lyrics by Don Black and book by Ivan Menchell, Bonnie & Clyde tells the familiar story of the infamous outlaw couple whose robbery and murder trail captured a nation during the Great Depression. The musical premiered in 2009 and debuted on Broadway in 2011.

The script is a welcome challenge for SCT’s teens, and the core of Bonnie & Clyde’s story has created deep discussions in the classroom.

“We think it’s a very relevant piece to presenting with our teenagers in the classroom setting,” Doubleday says. “Everyone in this musical is facing dark, terrible times and dark and terrible decisions, but only two people react to those circumstances with violence. Everyone else acts in a different way and in a way that’s generally more positive and helpful than the route that Bonnie and Clyde take.”

Students get to try on Depression-era dialects and learn stage combat for the production.

“The script is really challenging,” Doubleday notes. “It’s written in Depression-era Texas/Louisiana patter and we’re definitely treating it with more of that Texan accent.”

To get the hang of stage combat, it’s important for actors to work in slow motion, gradually increasing the speed an intensity until the battle is audience-ready.

Audiences should arrive ready to rock: The music of Bonnie & Clyde, brought to life by Music Director Brandon Kaufman, is an array of American tradition, featuring bluegrass, rockabilly, and tones of the era.

The cast has the style to match the sound, too, and they’re ready to strut their stuff.

“We go from Hooverville slacks and overalls into the finer, Al Capone style into flapper dresses,” Doubleday hints. “It’s gets to be pretty extravagant toward the end.”

Students have enjoyed conducting research and learning about one of history’s most infamous couples and the characters who surrounded them.

“There are so many historical figures, from Bonnie Parker and Clyde Barrett to the judge to [Former Texas Ranger] Frank Hamer, who caught them, to the first female governor of Texas,” says Doubleday. “We get to learn about that fun journey and take it with the teens, too.”

Perhaps the most fun is the realization that, in the grand scheme of things, Bonnie and Clyde’s story didn’t happen all that long ago.

“It’s another surprise for the adults in the room,” says Doubleday. “This was less than 100 years ago, which is mind-boggling! We’re having a lot of fun pulling it off.”