BUNNY IN THE CITY (with slideshow)

Celebrating their fifth anniversary with a community day and a fundraiser for Savannah Center for Blind and Low Vision, Step One Automotive Group (SOAG), along with Savannah Food Truck Force, held Step Fest at Daffin Park on June 5.

Checking out the massive stage, rock climbing wall, bounce houses and food trucks as far as the eye can see, my new assistant Wren Nix and I decide to divide and conquer this massive event. As Wren heads off to snap pics of vendors, I head over to find SOAG marketing manager Maja Ciric.

The Serbian beauty has worked tirelessly for months preparing for today’s celebration, and judging by the people already here, her wish for a day to celebrate her community partners is going to be a success. “After 31 Grab-n-Go Meals for first responders where we awarded local community heroes, we decided to host a day where we could celebrate everyone we have partnered with, and the entire community,” shares Maja.

Helping Maja is Step One Event Coordinator Chelsea Altman. In her signature black attire and dramatic makeup, Chelsea is living her life long dream of orchestrating the details of social functions. “This is my passion, where I thrive and it literally feeds my soul to bring people together. Being able to work with a company that is devoted to supporting non-profits is a dream come true,” shares the vivacious brunette.

Chelsea then introduces me to her favorite volunteers, Danielle Hughes and Abstract Samm. The Cycle Savannah writer and game host for Top Shelf Trivia is one fascinating female! Sporting three face tattoos, Abstract tells me. “You can find me busking most weekdays at Forsyth Park with a guitar covered in Sharpie doodles. I encourage people to come up and draw on my guitar.” On her own YouTube channel, this eccentric talent interviews people, especially musicians, in black and white and with her camera turned sideways.

Crossing over the grassy stretch between the food trucks and stage, I find Savannah Food Truck Force’s Vince Zambito directing 20 food trucks into their designated spots. The former Bayou Cafe restaurant owner has made a name for himself by having the largest access to food trucks in the area and I have grown immensely fond of this witty foodie!

Knowing half of the food truck peeps, I head over to see Tier One’s Nathaniel Cook and his gorgeous family. While the sports nutritionist is conconting a tea loaded with collagen, minerals, vitamins and protein, I ask his wife Jessica how they met. She answers, “When I was working at Smoothie King, Nate came in every day for a month and asked me out. I didn’t think about going out with him until I saw how his fellow 1st Ranger Battalion treated him.” Fast forward ten years and the now US Army Captain’s persistence has paid off. Married with three little ones, Nate tells me that drinking all those smoothies was worth it!

Ok! It’s snack time! While sampling some Fiesta Punch from Jack and Terry Ann Jackson at Six Gear Sandwich Factory, I learned about I Sparkle Party Palace. “Imagine parents being able to drop off 5 to 12 year olds for three hours of spa services like warm facials, mini-manicures and hand massages then visiting the royal closet where they select princess dresses colorful boas, angel hats and wings before hitting the runway,” shares the four month old business owner.

Waving at Sweet Spice’s Donovan Smith and Molly MacPherson’ Chris Boulanger, I catch a whiff of funnel cake and follow the scent over to Miss Katie’s Sweets. Consider my mind blown because April Floyd tells me that they have red velvet funnel cakes covered in banana pudding AND fried cinnamon rolls!

Passing by me is Step One South Savannah Store Director Terrance Tubbs and his gorgeous wife Ashonna. Married three years, the happy couple tell me they love living in the south because of the culture, the friendly people and all the hugging! Speaking of hugs, I trot over to hug retired Gulfstream royalty Al Wright, then squeeze culinary genius Joel Bullock. “You know I worked with Paul Kennedy Catering for 13 years. After he sold the company and moved to Johnson City TN, I came over to the Ark Royal aka British Pie Company,” shares my longtime friend.

My next longtime friend sighting is of legendary coach Karl DeMasi. The Long Island New York native hasn’t shaken that northern accent after 27 years in the south and reluctantly allows me to take a selfie with him before I head over to talk with The Savannah Center for Blind and Low Vision team.

The center’s Lois Modell tells me, “The money raised today will go toward travel expenses for our employees to provide orientation and mobility services, daily living tasks and our current assisted technology services like cell phone applications and GSP techniques. Having Step One partner with us doubles our reach because they are all about the community - just like we are,” shares the 10 year executive director.

During my final lap through Step Fest, I pause to compliment Step One Auto Group’s Georgia Platform Director Rick Brinkman on Step One’s commitment to first responders, veterans and the dozens of nonprofits that have been graced by Rick, Maja and her loyal team. Y’all have truly Stepped Up! 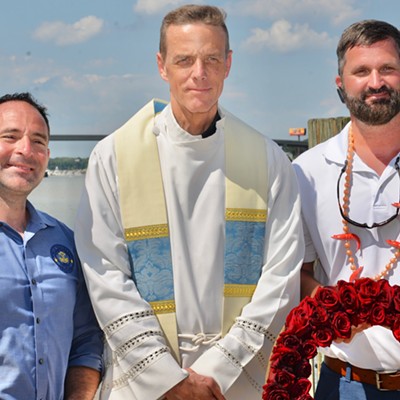