Help Savannah students during the holidays and beyond

RIGHT NOW most kids are counting down the hours until winter break, looking forward to treats, playtime and presents.

But for hundreds of students in the Savannah-Chatham County Public School System, the next two weeks can mean empty cupboards and rumbling tummies.

More than 70 percent of SCCPPS schoolkids qualify for free and reduced lunch, and 31 schools—61 percent of the district—are classified as Title 1 by the U.S. Dept. of Education. Kids from low-income families eat free breakfast and lunch at school through the federally-funded program, and that means when there’s no school, there may not be meals. 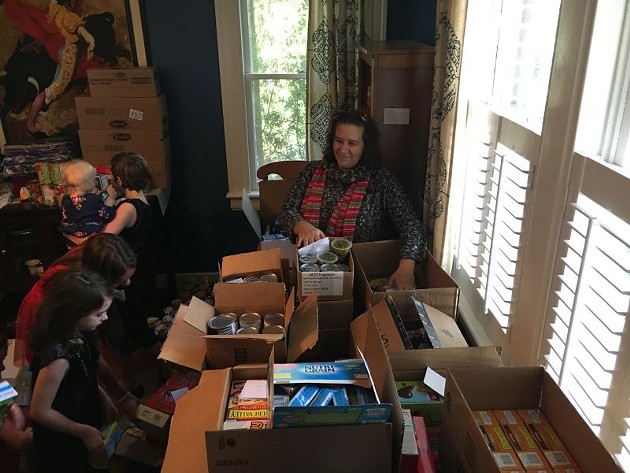 “We know that there are basic things that kids need to succeed in school, and in turn for their schools to succeed,” says Georgia State School Superintendent candidate Otha Thornton. “Nutrition is number one.”

Thornton has teamed up with local organizations to ensure that food insecure children have something to eat over the holidays: Voices for Schools, Save Our Youth Savannah and LB4&After Foundation have collected barrels of non-perishable foods over the last few weeks as part of Santa’s Pantry, a food drive exclusively for SCCPSS students.

“We’re trying to feed at least 700 kids this year,” says Jenny McCord, one of administrators for the Voices for Schools Facebook page. “That’s more than double than last year.”

Bags brimming with snacks will be sent home this Friday, though organizers recognize that peanut butter and fruit cups may only go so far. Santa’s Pantry will visit six locations around the city during the holidays to bring warm plates, goodie bags and good cheer, including Savannah Gardens, 38th Street Park, Kayton Homes and Yamacraw Village.

“We’ll be setting up in the park areas where kids can come get spaghetti and hamburgers and hot dogs, plus we’ll have activities and a DJ, so they have a little fun.”

Mike Jones of Jones Red & White grocery store has again sponsored the ingredients for the meals, and donations and volunteers are still needed this week. The more food received and time put in, the more children helped, and that benefits the whole community, says Bryan.

“This is how we’re going to change what’s happening in our corner of the world,” avows the indefatigable activist, who lost a son to gun violence in 2015 and has fostered countless events and fundraisers for Savannah youth.

“It’s great to do it during the holidays, but we need to do it all the time.”

McCord echoes that providing not only basic nutrition but other support services benefits the entire school district, where the number of failing schools doubled in 2017.

“If we had wraparound services at school, we wouldn’t have to do this,” says the public education advocate.

She defines “wraparound services” as anything other than sitting in the classroom—meals, counseling, literacy workshops, tutoring, medical care—that help families address barriers to student education.

“Urban school districts with a large population of poor children that are successful utilize this model,” explains McCord.

“From bringing in social workers to feeding kids when school’s not in session, there are so many things we can do to make it easier for kids to learn.”

Providing food to needy kids over the holidays is just the beginning of a pragmatic approach to fixing our schools, agrees Thornton. He’s basing his platform on restoring educational funding to the state budget with the promise to level the playing field for all students.

“I’ve worked with school systems in getting wraparound services incorporated into schools and I’ve seen how it helps students succeed in the classroom,” says the 2018 candidate, who served as the president of the national PTA from 2013 to 2015.

“You have to meet the needs of a child before you can educate them.”