Stopover: Girl in a Coma 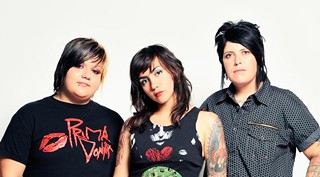 Nina Diaz is the lead singer for the San Antonio rock ‘n’ roll trio Girl in a Coma. She also plays wicked guitar, and she writes the band’s songs (although one of their albums is an all–covers affair that stands very, very tall on its own).

The music can be feral punk or moody, multi–planed lyrical pop, all of it played with a tough edge and capped with Nina Diaz’ distinctive, spine–rattling voice, which can go from a purr to a yowl to a scream at the turn of a syllable. Sort of a Bjork–sings–Patsy Cline kind of vibe.

In 2010, director Robert Rodriguez asked the band to write and perform a song for his film Machete; he returned the favor by helming the video for their cover of David Bowie’s “As the World Falls Down.”

The band’s latest album, Exits & All the Rest, is the fourth on Blackheart Records, the indie label owned and operated by Joan Jett, Girl in a Coma’s mentor.

I’ve seen videos of you, solo and acoustic, covering Jeff Buckley and John Lennon songs. I know Phanie and Jenn were playing together before you joined up — did you bring different musical tastes into the mix?

Nina Diaz: Me being the younger sister, of course I listened to the things they were listening to. And I had my own silly music I was listening to at the time — I was 13. There are guilty pleasures that are still around, like Aqua and stuff. I always took everything to heart, whatever I was listening to, and at 13 I got into Morrissey. And when I was about 15, that’s when I really got into Jeff Buckley.

There wasn’t a sound, or an idea of “This is what Girl in a Coma is gonna sound like.” It’s just something that happened as we’ve progressed as musicians. And as you learn covers you find that it helps your writing style, to see more outside of the box than your typical comfort zone.

But had you thought, ever, that you might become a singer in a rock band?

Nina Diaz: It’s really funny that you say that. Whenever we tour, we end up mixing somehow with whoever we tour with. And the fans of those bands either like us or they don’t. Jumping around and singing, it’s not an act, it’s something that happens with this music. I was talking to Phanie and I said “I guess I just have to embrace this, don’t I?” Everyone else will tell you what you are, but you have to figure it out for yourself.

And just recently I realized OK, this is the kind of performer I am. But I would like to do other things, to show different sides of myself. That’s why I like to play with other musicians sometimes. Collaboration gives me that other side in my brain, to be that other part of the musician I know I am.

Has the success of the band been surprising to you?

Nina Diaz: We’ve met a lot of people: We got to play with Joan Jett and Cherie Curie. We opened up for Morrissey. I mean, you’re working with Robert Rodriguez. From the get–go, we just all wanted to have fun. We still have fun, but there’s more of a business side to it. We’re not messing around any more, not drinking, not falling into the usual routine of we’re just gonna go out on tour, and party, then come home and sleep, then go on tour and party. Now we come home, we rest, but we still keep up the mentality that we’re going to be out on the road again. Relationships are hard, sacrifices are made, we’re out on the road and we do our thing and we try to be the best that we can at it.

How has the experience changed you so far?

We notice that the more success you have, the more people start to talk about you in a bad way. You get, like they say, haters; that’s something that we’ve been dealing with moreso now than ever before. But it’s nothing that’s going to keep us locked up in our room or anything — it’s like “Oh! I guess we ARE doing pretty good, since people are starting to talk about us in that kind of way.”

Are they saying ‘They’re a chick band, how can they be any good?“ Or “It’s just Tejano rock ‘n’ roll”?

Nina Diaz: My sister just had a confrontation with someone recently; he told her “Women don’t have a say in rock ‘n’ roll. What do you know about your equipment? Do you know what kind of pedals you use?” And then I said, “Do you know how to write a song?” It doesn’t really matter if you know every little detail. When it comes down to it, if you’re a musician, or call yourself a musician, can you back it up? In the sense of, can you actually play a song that inspires someone?

I loved the Donnas when they were underground. Then they put on all this makeup, and everybody loves them. I feel like they had to conform to what everybody wanted. We feel the same way sometimes; we do get the pressures of “You have to look a certain way.”

When it comes down to it, we just want to be healthy and we’re just gonna play our music. We all have big hips, and that just happens, you know. We can’t change that.

Girl in a Coma