'We pay respects to Otis & Stax & the Swampers'

A portly white guy in glasses and a squaresville bow tie, Paul Janeway of Birmingham, Alabama looks like Drew Carey in the front row of Sunday School class. When he first dances onstage, with the Broken Bones pounding out a sinewy R&B beat punctuated by real, live brass, Janeway seems the least likely candidate for inheriting the Otis Redding "King of Soul" crown.

And then he opens his mouth and begins to sing.

He shouts. He wails. He croons. He belts. He pleads. And that voice seems to explode from the dark recesses of that goofy-looking nerd body and bounce off the walls, into your brain, into your heart.

Ann Powers of NPR calls St. Paul & the Broken Bones "one of the nation's best live bands," describing how "the crowd grew from a sparse dozen onlookers to a packed, throbbing organism" at a show she caught.

Janeway grew up in a strict Pentecostal home—curiously, black gospel music was common in his otherwise-staid church services, and and idolized gospel vocalists Alex Bradford and Mighty Cloud of Joy Joe Ligon.

As a matter of fact, he was all lined up to get ordained as a minister (hence "St. Paul") when music—as it tends to do to those obsessed—took him by the soul and turned his head like Linda Blair in a brownstone bedroom.

A year ago, Janeway was a bank teller by day and a soul shouter by night.

But he and his bud, guitarist Jesse Phillips, threw everything into this band, gambling on its most potent instrument: Janeway's voice.

CS: It seems to me that people can take lessons, train and learn, but they either have "it" or they don't. Did you always have that voice?

Paul Janeway: I don't think so, necessarily. I started when I was about 4 years old, but it was a little sweeter when I was younger. As time went on, it got rougher and rougher. To where I realized I was really comfortable, and that's when it kinda took hold and I went "Oh! That's where I need to be." I could belt it pretty good at 12, but I'm a much better singer now than I was at 12.

CS: You come from a churchy family. I wondered how your family reacted to this secular turn.

Paul Janeway: It's bizarre, because when my parents got a divorce, they started telling me all these stories about concerts they used to go to before they had me! I was just kinda like "I'll be damned! Why did you raise me like that, then? Why didn't you let me listen to that?" My dad was telling me "Yeah, best concert I ever saw was Elvis Presley." He never told me that as a kid. I never knew that.

CS: Did they think it was sinful?

Paul Janeway: I guess. Y'know how you get converted or something, and you start going "I gotta get rid of my record collection and only listen to gospel"? That's what they decided to do, I guess. They're really supportive. My dad's one of those people that kinda pooh-poohs everything. I love my dad, but ... well, I think he's pretty proud now.

Because of the band, we've got a connection to one of the people in PR at ESPN. So when we were up in Connecticut, we got to take a personal tour of ESPN. They don't do public tours. And I got my dad to go. That's when he thought "M'boy's big time!" That's really what convinced my dad that this is legit.

CS: Sharon Jones and the Dap Kings, Charles Bradley and those bands are always called "retro soul." It seems people go out of their way to call what you guys do "not retro." How do you avoid sounding exactly like a vintage soul show band? Is it because you write all the songs?

Paul Janeway: We definitely pay our respects to artists like Otis and Stax, and the Muscle Shoals Swampers. I think the thing is, we come from a pretty honest place. It's kinda "us," and I think that's what makes it a little less retro-sounding, that we kind of take ownership of it. We didn't go "OK, we're gonna write kind of a Stax song. Or a Motown song." It was one of those things that did happen fairly organically. When me and Jesse were first in the studio, we didn't know that we were gonna quite have horns in there. I wanted it —I knew what I wanted, but it took Jesse a little converting.

I was a little worried about that. 'Cause I don't consider us a retro act. I definitely have my things that are similar, but it's not a straight-up revue type thing.

CS: You're not the most handsome devil on the planet; are people surprised to hear that voice coming out of you? Are they surprised to find you're white?

Paul Janeway: I'm not gonna win any modeling contests any time soon, but I think it's interesting ... I never thought "Oh yeah, I'm white," I just have always thought that's what good singers sound like. I've never thought "Oh ... I sound black," I've just always thought I really like soul music, I like singing it and I like doing our thing. And I kinda sound like I sound. That's when you just leave it up to other people. 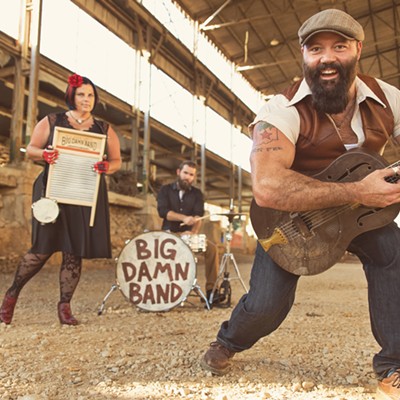