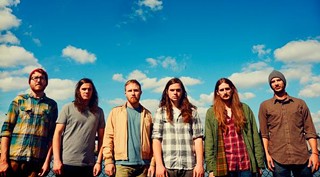 The third annual Savannah Stopover - with performances from more than 80 independent bands and artists from all over the country - takes place Thursday-Saturday, March 7-9 at various locations around town.

Our in-depth profiles and capsule exams start with this issue, and will appear consistently for the next two weeks. By the time the event rolls around, you'll have a pretty good idea of who you want to see and hear.

The full schedule and ticket information can be found at savannahstopover.com.

There's more to Prince Rama's hypnotic psychedelia than swirling colors, tribal beats and chanted mantras. "We're really trying to exercise pure love," says synth player and vocalist Taraka Larson, "and there's no way you can grasp it or control it. So you have to just let it go, and let it do its thing, hold your palms up and outstretched and your fingers spread wide open."

Embraced by such luminaries as Animal Collective, who took Prince Rama on tour, and Pitchfork, which calls the duo "heady and evocative," Prince Rama skillfully blends trance, dance and a smoky, spiritual haze.

The women grew up in a Krishna compound - where music and chanting are a part of daily life - near Gainesville, Florida. At one point, Taraka was determined to become a monk. And then something changed.

"I was at an ashram in Pennsylvania, and this monk was renouncing all his possessions," she explains. "He gave me his keyboard, and before I knew it I was in my room playing it all the time.

"You don't really make these decisions - you're guided to do it, and you don't question it," she says. I was like "‘ I don't really know how to play synthesizer, but I guess I'm gonna learn.'" We started Prince Rama in Gainesville as an acoustic band; once you get comfortable doing something, that's when you should stop. Or go deeper."

Now based in Brooklyn, the sisters are determined that constant touring - not to mention acceptance and success - won't spoil them or their reasons for making this music.

On a big stage, Taraka says, "what you're doing is getting amplified even more, so I feel it's really important to have a really solid, clear head and heart when you're up there."

Because musicians are continually paying it forward, you'll hear elements of Wilco, Whiskeytown and Fleet Foxes in this band. But Shepard and his brothers Maxx (drums) and Zach (bass) have created a sound that gives Andrew's original tunes a ghostly, melancholy air - a bit of the Band of Horses appeal. It's augmented by lead guitarist Stephen Garza, and by organist Joey Davoli - also a trumpeter, he gives RGC its sometimes unsettling aural undercurrent.

This year's variation on the Grimes theme comes from Brooklyn musician and artist Lorely Rodriguez and her alter ego, Empress Of. It's swirly dance-pop created with heavy beats, synthesizers and surprisingly delicate guitars.

Catchy tune #1 is "Champagne," the video for which consists entirely of Empress Of salaciously consuming a watermeleon. The clip is weird, but the song is absolutely unforgettable. Then there's "Don't Tell Me," a melancholy piano ballad, with Rodriguez singing in a sweet, aching soprano, with minimal accompaniment.

So who is Empress Of? She is clearly a major talent who will not be boxed in. You can sample all of her stuff - and more - at empressof.me, which looks like a Craigslist page! Be forewarned, it isn't.