Stories from the underground

'The history of the enslaved Africans who labored and built this city is all around us,' explains Patt Gunn, dressed in the colorful textiles of West Africa. 'Our ancestors continue to speak to us through many clues.' 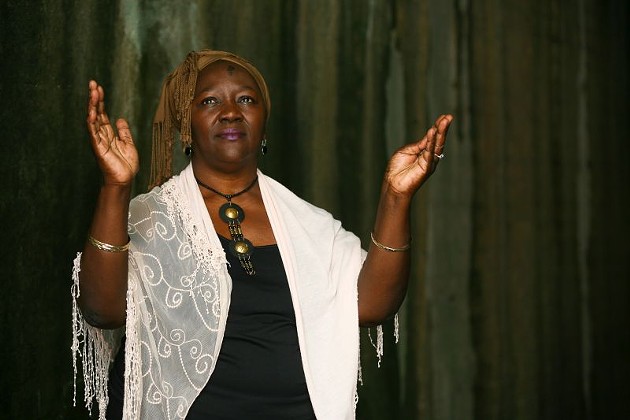 Photo by Jon Waits
Gullah Geechee storyteller and Savannah native Patt Gunn passes on the history of the city’s slaves through her company, Underground Tours of Savannah.

EVERY YEAR, millions of tourists traipse along the worn cobblestones of Factor’s Walk, soaking in Savannah’s historic charms.

While they learn about General Oglethorpe’s vision and Sherman’s restraint for not burning the city to the ground, few stop to think about the forgotten hands that laid the bricks and set the stones. Even locals aware of Savannah’s history as one of the Atlantic slave trade’s busiest ports find scant indication of its impact.

“The history of the enslaved Africans who labored and built this city is all around us,” explains Gunn, dressed in the colorful textiles of West Africa. “Our ancestors continue to speak to us through many clues.”

Gunn grew up in Savannah and the surrounding Sea Islands in a family of eight children, including her brother, state representative Carl Gilliard. Absorbing the stories and traditions of her Gullah Geechee relatives, she learned to recognize signs of West Africa’s presence in Savannah and has channeled that authenticity into her work, and recently, as an extra in the WGN TV drama Underground that filmed in the city throughout 2015 and 2016. She launched Underground Tours of Savannah this summer with cousin and business partner “Gullah Mike” Washington after it was announced the show was canceled.

“We had been on the set of ‘Underground,’ and it was so gratifying to be a part of telling the story from slavery’s perspective,” recalls Gunn. “We knew we had to continue the conversation.”

The tour covers nine points specific to slavery in Savannah, beginning at the African-American monument on River Street, built in 2002. While many might glance over the bronze family in modern dress, Gunn and Washington are quick to point out the Maya Angelou quote at the pedestal, which stoically and graphically refers to the horror of the Middle Passage that brought Africans to the city:

We were stolen, sold and bought together from the African continent. We got on the slave ships together. We lay back to belly in the holds of the slave ships in each other’s excrement and urine together, sometimes died together, and our lifeless bodies thrown overboard together. Today, we are standing up together, with faith and even some joy.

“That was written by Maya Angelou specifically for us, for this monument,” clarifies Gunn.

“She gave us the truth,” nods Washington.

Crossing the trolley tracks, the tour leads to the shadowy archways of the Cluskey Vaults, named after the architect commissioned to build them in 1842 as part of a retaining wall.

While it is documented that the city owned slaves, there is nothing in the city archives to indicate what purpose the vaults served. It has long been city lore that the spaces were used to hold slaves, and in 2013 Georgia Southern University conducted an archaeological study of the site.

Many Civil War-era artifacts were recovered, but no evidence surfaced to support the claim that human beings were once held inside. After the study, however, city employees did stop using the historic structures as a parking garage.

Gunn is careful to defer to the archaeologists’ findings, though questions remain.

“If this were just built as a storage facility, why are there windows and ventilation slats?” she asks, waving her arm around the brick space. She points towards the floors, where concrete fills in troughs that once dipped towards the river.

“I saw these same troughs in Ghana, West Africa, in the rooms where slaves were rounded up before they were put on ships. They’re tilted so that their waste would drain away.”

Images available online confirm the similarity between the Savannah vaults and those of the dungeons of Ghana’s Cape Coast Castle, a colonial-era compound that was “the point of no return” for thousands of West Africans. The arches and dimensions of the vaults also eerily evoke descriptions of the same dungeons in Yaa Gyasi’s recent best-selling novel, Homegoing.

The resemblance and the stories about these vaults passed down by Gullah Geechee grandparents and great-grandparents are enough to give them a painful significance to Gunn. Before moving on, she lifts her arms in prayer and whispers, “Ashé,” the Yoruba spiritual affirmation.

“To us, this is a sacred place,” she shrugs, placing her hand on her heart. “I’m just glad they aren’t cars in here anymore.” 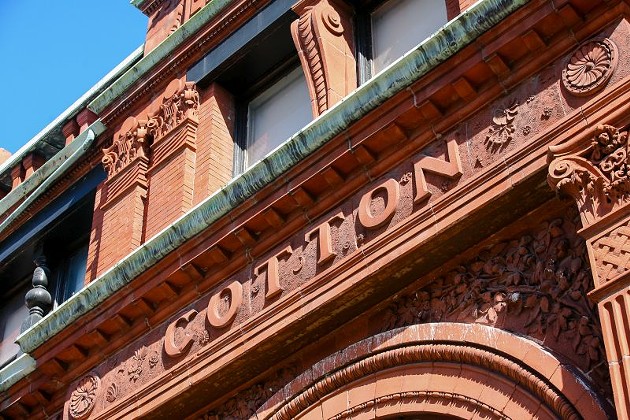 Photo by Jon Waits
Details of the Cotton Exchange building that bear Adinkra symbols from Africa.

Climbing the stone stairs to the top of the bluff, the guides stop next in front of the terra cotta façade of the Cotton Exchange.

Built in 1886 well after Emancipation, the building is nevertheless irrefutably imprinted by African hands: Above the doorways near the lettering are a smattering of tiny flowers, moons and crowns recognizable as Adinkra symbols, part of the visual language that originated with the Ashanti people of Ghana and Cote d’Ivoire.

“This was their code, their language of home,” explains Washington. “It’s almost if they said, ‘we’re the ones building this, and we are going to leave our mark.’”

Also on the tour is Calhoun Square, though not for its slavery-defending namesake. Prior to the Civil War, the square served as an unmarked burial ground for thousands of slaves, another longtime rumor that was confirmed in 2004 after utility workers dug up a skull while repairing a gas line.

Gunn has been advocating for a marker here ever since, as well other places of meaning for descendants of African slaves.

“We don’t want to take down monuments, we are focused on healing and reconciliation,” affirms Gunn. “We don’t want those other places destroyed. We just want a seat at the table.”

More traces of enslaved Africans hidden in plain sight are revealed on the 45-minute walking tour, which culminates at First African Baptist Church. Well-known as a stop on the Underground Railroad, the church’s sanctuary had a hidden refuge for escaped slaves under the floorboards, which are perforated with air holes arranged in a diamond pattern known as a Congolese Cosmogram. 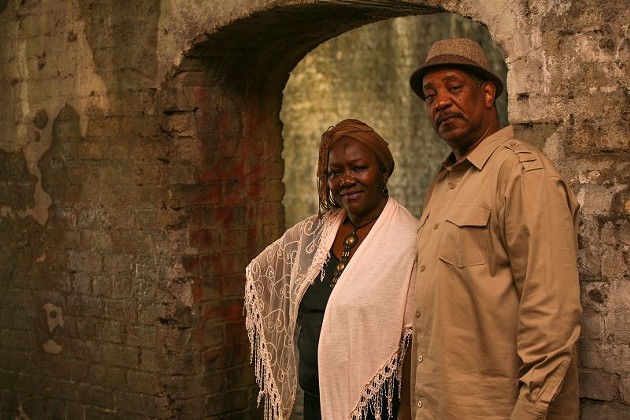 Photo by Jon Waits
Sistah Patt and her business partner and cousin “Gullah Mike” Washington stand in the Cluskey Vaults, built in 1842 for unknown purposes.

The wealth of symbols and traditions that survived the Middle Passage are indicative of the many different tribes that slavery decimated on the African continent, says Gunn. She hopes visitors and locals will deepen their knowledge of Savannah’s slave history with the Underground Tour and catch historical interpretations by her performance troupe, the Saltwata Players, who will be at the annual Jubilee celebration marking the end of slavery on Dec. 21.

“We want people to understand that African American enslaved people mattered, they had traditions, they had families,” reminds Gunn.

“This is our story. As the ancestors say, We speak ‘fuh We.” cs

Art party in the square!