"Stranger Visions" is one of three collections grouped in the exhibition "Re-Embodied: From Information to Sculpture," which also features David Bowen's LED sculpture and Courtney Brown's "RAWR! A Study in Sonic Skulls."

HOW MUCH DNA do you leave behind on a daily basis?

Think about it—the cigarette butt you threw out the window, the gum you spit onto the sidewalk, and the glass you used at the restaurant all contain traces of your DNA.

So does a strand of your hair that falls out, or a piece of paper you touched.

If you had to trace every instance of your DNA being left behind, could you do it? Would you want to know?

“Stranger Visions,” Heather Dewey-Hagborg’s innovative exhibition, opens this week with the PULSE Festival, and it all began with a hair caught in a crack of a painting. “For me, it was this moment of revelation of human vulnerability,” she recalls. “It was this question of how much can I learn about a stranger from a hair? How much do these little bits of ourselves we leave behind say about ourselves on a genetic level?”

The project began in 2012 when Dewey-Hagborg began collecting objects found around New York City and extracted the DNA from them in a biology lab. That analysis provides information like eye color, gender, ancestry, and more.

She then developed custom software that allowed her to parameterize the traits and 3D-print a facial replica that is extremely similar, if not identical, to what that person looked like.

You’re reading that right—when used with the right technology, a hair can reveal your face.

The technology to identify people through DNA testing has obviously been around for quite some time, but Dewey-Hagborg’s project takes it to the next level by rendering an image of their face that, even with room for error, is enough to pinpoint the person. 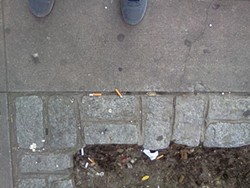 Even if you’re careful to put your cigarette butt in the ashtray or trash your gum immediately, your DNA is still out there.

“You can’t help losing your hair, can’t help leaving behind saliva or skin cells on everything you touch,” she says.

The exhibition, up through April 9 at the Jepson Center, groups the 3D prints of the facial replica with the DNA trace that Dewey-Hagborg collected, details of the analysis, and a photograph of where the item was found. Used together, the items evoke a vulnerable, somewhat unsafe feeling.

However, Dewey-Hagborg says the experiment wasn’t intended to be a scare tactic at all.

“It was an open-ended exploration rather than trying to find an answer; it was about what’s possible today, and the main thing I was feeling was curiosity,” she says.

The curiosity exists because biological surveillance, as it’s called, isn’t a widespread topic of discussion quite yet, but Dewey-Hagborg thinks it should be. 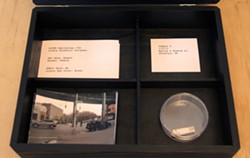 “My impression [after the project] is, basically, we are going to be entering a kind of post-genetic privacy world that we have not even remotely begun to discuss as a culture,” Dewey-Hagborg muses. “I think these issues are only going to be growing larger and larger.”

One application of the technology is paternity and genetic testing, which is already commonly used but will most likely become more accessible.

“These kinds of pieces of information can easily be used against people; they can be shocking revelations, you learn things about family history,” Dewey-Hagborg says. “There’s no shortage of ways in which these things could become problematic.”

Of course, the technology can also be used for good. Dewey-Hagborg shares an article from The Verge on her website that shows how police are using the technology to catch criminals. It’s almost like a more conclusive police sketch and can potentially solve cold cases.

Dewey-Hagborg doesn’t doubt that the technology can be used for good—“it walks this line between doing something sinister and calling attention to the fact,” she says— but still thinks there should be a way for us to retain our genetic privacy.

One of her follow-up projects is Invisible, a spray that seeks to remove or replace DNA traces, but she points out the futility of the effort, saying, “We’re constantly shedding these traces.”