Since their 2014 formation, Savannah dance-rock band Street Clothes has endured lineup changes, breakups, and births to craft dance-pop for the vintage-loving, glam-pop masses.

Adding longtime producer Peter Mavrogeorgis on bass and John Xarras on guitar, the band has elevated their captivating live show and is ready to throw down at this weekend in celebration of a new album.

Superautomatica hits the internet this week, and the band plans to release vinyl in the near future. We talked to vocalist Andrew Sutphen about arpeggiator magic, girls in cults, and the band’s big plans.

What did you have in mind for the sound of this record?

With this record, two things happened. I got one of those Microkorg arpeggiators, and I went through a couple bad breakups and did the thing where you lock yourself in your apartment and write an album. I did it in a month or so; I had eight demos that were pretty close to what is on the record except they’re terribly recorded and I played all the instruments on them.

I brought them to the band and Peter [Mavrogeorgis], and it was kind of an amazing thing because the band was kind of broken up at that point.

Yeah. We were fighting all the time. We were supposed to go on a tour that didn’t happen for various reasons.

I had a lot of months where we weren’t practicing and I wasn’t sure I was going to even had a band, so I had to write an album. This album is geared more toward dance. We found our sound, and it was different than the first record.

I wrote the record, emailed the band, and they didn’t respond for a week. Then [keyboardist] Veronica [Garcia-Melendez], my harshest critic, called me at like 3 a.m. and was like, ‘This is amazing, it’s so good.’ Wwe all got back together in the studio.

So it was really cool—we were essentially broken up and the record saved everybody.

You’ve been through some lineup changes in the last year. Did those happen around the “breakup” time?

That definitely was a part of it. We’ve had so many lineup changes, but me, Veronica, Dave [Murray], and Peter were always a part of it, from day one, with Peter producing us. We didn’t have a bass player for a while, so Veronica was playing bass. Then we didn’t have a keyboard player!

Austin left because he wanted to go solo and record his own album, and Jimmy had a kid. It was all at the same time.

Then John Xarras, the manager of Les Racquet and a phenomenal jazz-trained guitar player, was recommended to us and fit immediately.

Peter, somehow we conned him into playing bass for us. Every time we play, he makes tweaks and we sound better—it’s like having a producer right there!

So, you record all the instruments on the demo, hand those off in-studio, and go to the mic. What’s that like?

There’s this line from a record—I think it’s on the back of Hunky Dory—it says something like, "This person plays piano due to my lack of ability."

That’s how it is for me. I can sit in my room in my little apartment studio and record stuff that I think is really good, and I know the songs are really good, and I work on them for hours. But for me to write that guitar part probably took 17 times longer than if Peter picked up the guitar and knew the melody I was going for. It’s so much smoother when anyone else in the band plays it.

I’m good at writing this stuff and Veronica and Dave structure it. Then it gets to Peter and it pretty much changes 180 degrees from there. Once I’m done writing, I’m pretty much out of the way after that.

This album is a dancier one.

Yeah, I got that arpeggiator and I think I learned how to sing, finally. We started as garage rock because I couldn’t sing very well, so I would just freak out onstage and people liked it. But now, we can actually perform these songs properly.

You’re working with House of Strut Records. What’s that partnership like?

We’re going to put out this record through them, but before we do that, we’re putting out the record on the interweb. Then after that, we’re planning on doing one of House of Strut’s “Live at House of Strut” vinyls. That’s the next idea. It would be “Debbie Harry” and “.....”

I’m really excited to do vinyl this time. 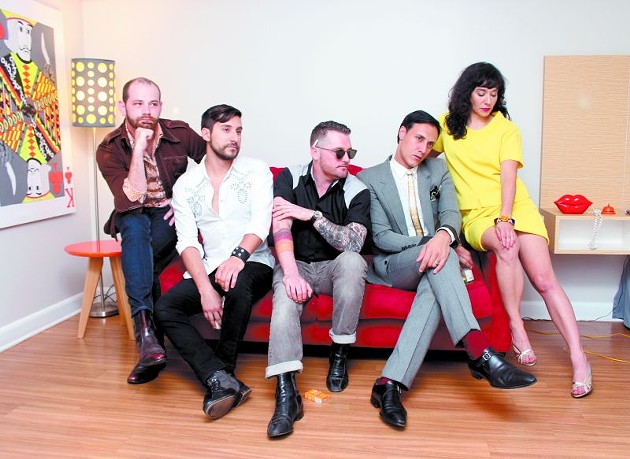 There’s a song on the album called “Girlfriend in a Cult,” and that’s a true story. There was a situation where I was in New Orleans and Veronica drove out in a day’s notice and met me there and rescued me. It was one of the nicest things any friend has ever done for me. I came back and was like, “I’m going to lock myself in my apartment and write about this.” Though all the songs aren’t about that situation, they were all inspired by that, and every line of [“Girlfriend in a Cult”] is absolutely true.

There’s so much going on—Erica [Cobb Jarman of House of Strut] is really kicking ass right now and being a real force to be reckoned with, so that’s amazing.

We’re just excited to put out this record finally and do it properly with artwork and make it beautiful like a real band.

El-Rocko, I’m fairly certain, will be the best show to date—the most badass disco show we’ve put on yet.