A talk with Rusty Browne, founder of one of downtown’s most successful, unique, and long-running businesses

BEFORE "The Book" and Forrest Gump, before Uber and Airbnb, before swanky rooftop hotel bars and ubiquitous bachelorette parties, there was Russell "Rusty" Browne and Savannah Pedicab.

Begun in 1994 with one old cab whose claim to fame was being featured in the Magnum PI TV series, Savannah Pedicab expanded to a fleet of people-powered vehicles and has employed roughly 1500 drivers in Savannah over the last quarter century.

Along the way, this unique business with humble beginnings lit a spark that helped transform Savannah from a quirky backwater into a world destination. 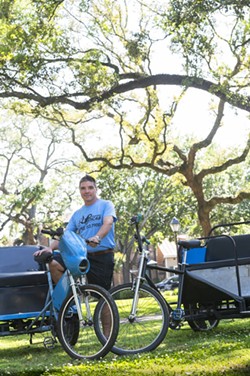 Photo by Geoff L. Johnson
Rusty Browne with his oldest Pedicab, and one of his newest

“Everybody thought I was crazy,” Browne laughs. “Back then, the city was doing pretty poorly. Those were lean days for Savannah. The economy wasn’t good at all.”

Entrepreneurs talk today about the positive impact of disruptive innovation. Rusty was doing that long before the phrase was coined.

“I looked around for a way to light a spark to bring all of downtown together. I wanted to be that catalyst. I cared about our city and our brand and making it better,” says the native Savannahian.

The result was a seminal business that laid the foundation not only for the eventual success of the local tourism industry, but helped keep Savannah Savannah.

“In other places, pedicabs are just ways for people to ride around. Here we actually picked up people who wanted to spend money, and took them to the places where they could spend it,” he says.

“We took Savannah’s economy and pushed it all the way through the whole city.”

Browne says that in the days when there was just one walking tour in town, long before there were any get-on, get-off shuttles or trolleys, “I was the guy taking people to stores and dropping them off and picking them up. If two ladies said they wanted to go antiquing, I’d take them where they needed to go and say, I’ll come back and get y’all in two hours.”

As you’d expect, Browne has quite a few stories to tell.

“I saw it all. I stayed out riding until midnight every night and I knew everyone on the street. I knew the homeless people by their first names,” he recalls.

The subculture chronicled by John Berendt in Midnight in the Garden of Good and Evil was in full swing, and Rusty pedaled through the thick of it.

Photo by Geoff L. Johnson
Rusty in the shop with driver Juan

“When I started out, Madison and Monterey squares were nothing but prostitutes and johns up and down Bull Street at night. But because of that, the city was safe! Then they took that away, and crime escalated, because they took the eyes off the streets. That’s when it began to get seriously dangerous out there.”

He remembers giving rides on New Year’s Eve 1999, when fears of “Y2K” breakdown were in the air as midnight approached.

“When it turned midnight, everything was dead silent. No fireworks, no nothing. People were scared the world was going to end. And we’re all there on our cabs. All of a sudden one lonely firework went up. That was like the signal. Everybody said, all right, let’s go!”

Every night brought a new adventure, and Browne gave rides to just about everyone at some point or another, from the humblest citizens to the most powerful movers and shakers.

Browne gave Berendt himself plenty of rides around Savannah while he was working on what would become “The Book.”

“One time I told him, ‘Thank you for what you’re doing for the city.’ He laughed and said, ‘Don’t thank me yet.’”

Rusty’s pedicabs have hosted more than their share of impromptu business meetings.

“People were doing deals in the back of the pedicabs. We were so private. They’d just ride and drink wine and talk,” he says.

“Back then we were neighborhoods. We knew everybody. Our customers were mostly people who lived downtown, rode a lot, and drank a lot!” he laughs.

“I’ve had all the local big businesspeople come and ride, and sometimes give me advice, too. You never know when someone’s going to drop a piece of information on you that will change your life.”

Paula Deen was a regular client, and dropped Browne some of that advice.

“When she’d get off work, I’d pick her up and she’d get in the back of the cab with a gin and tonic and a cigarette,” Browne remembers.

“On one ride, I told her about somebody trying to recruit me for another job. I told her I was worried that I couldn’t go back to working for other people,” he says.

“And Paula was right. Once you’ve gone through running your own business, you can’t really work for anyone else anymore.”


THE STORY of Rusty Browne’s journey as an entrepreneur is as interesting as the stories he tells about his rides.

“I was getting my wisdom teeth pulled out, and in the dentist’s waiting room I saw a picture in a National Geographic of a kid with his leg thrown over a pedicab. I thought, now there’s a way to move people.”

At the time, Browne was looking for a business opportunity. He’d been bouncing ideas off a mentor, the great local seafood market owner Charlie Russo.

A young Rusty giving a ride to then-Mayor Susan Weiner

“Then I showed him a brochure about pedicabs, and he was like, give me a day or two. And that was basically the beginning.”

When Browne found out what would be his first cabs were for sale in New York, he hitched a ride to go up and bring them down South.

“I shipped them home to Savannah in a fish truck. They literally came back from New York frozen.”

In a story that sounds as familiar today as 25 years ago, Browne says it took about two years to clear the bureaucracy of City Hall to actually get up and running. He credits former Alderman Dana Braun for getting it through Council.

When Rusty got the cabs back to Savannah, he discovered a problem.

“The hole in my business plan is I’d never worked on a bike my whole life,” he laughs. “I had ever changed a chain, never changed a tire.”

The first time he rode a pedicab around the block, he realized the depth of his problem.

“I could barely make it around. Wrong chains, wrong gear, tires were flat. I was like, oh no, I’ve totally screwed up. I was almost in tears. Then a buddy of mine offered to help,” he remembers.

“But that’s Savannah. We’re a village. We have a culture like no other city.”

The need to learn maintenance pushed Browne into his side career as a blacksmith.

“When I started there was no way to get parts. I had to learn to make my own parts.”

His metal work evolved into a shoulder-season business, including making and selling Georgia Oyster Knives.

About 11 years into the business, with an expanding staff and fleet, Browne married his wife Karen Browne.

It was a game-changer in more ways than one.

“I was in my own circle and couldn’t get out of it. She took the raw materials I had built and put them into order and into shape, and made it what it is today,” he says admiringly.

“She works just as hard at it as I do, and she’s running it more than I do now. All I did was ride tricycles. I can ride ‘em, I can fix em, I can build ‘em, but I couldn’t always keep up with the business. She came along and made it into the machine it is now.”

For Browne, the relationship with the many drivers he’s hired over the years is what makes the business so special.

He’s employed all types, from SCAD students to Vietnam veterans to the homeless looking for a leg up.

“My goal is to make these guys feel like they work for themselves. I treat them like my clients rather than my employees,” he says.

“We have guys come in who want to work, but they don’t know what they want to do yet. We give them a foothold so they can get a direction.”

The camaraderie of Savannah Pedicab drivers is strong, and spans generations.

“A lot of them have gotten tattoos of their driver number. They’ve organized get-togethers in New York and Atlanta that I had nothing to do with. You’ll have guys from 2014 hanging out with crews from 1996,” Browne remarks.

The great thing about being a Savannah Pedicab driver, he says, is “you stay out late every night, but you don’t wake up the next morning feeling bad and you don’t wake up broke. You’ve met a bunch of cool people and had a good time.”

SAVANNAH HAS changed greatly in the 25 years Browne has been in operation, and Savannah Pedicab has had to change with it.

New technology has brought the same challenges to his business as it has to many others.

“When 80 year old people know how to call an Uber, it’s a different game,” he says.

Browne has invested in some new cabs which have wider bench seats and are more comfortable, to respond to rider demand.

“My dream has been to have Game of Thrones-style pedicabs, all different wild designs everywhere all over town,” he muses while showing me around the company headquarters and machine shop behind Cha Bella on East Broughton Street.

Browne hasn’t done any serious pedaling for about ten years. “I rode hard for ten years before that, night after night, and got sort of burned out on it. But I’ve never not had fun doing this.”

Now, his focus has shifted to mentoring drivers and trying to maintain his fleet and a solid staff.

“But I miss those hungry days, don’t get me wrong,” he laughs. “Back when I had ten drivers and I was rolling my own cigarettes and drinking Schlitz, I was good!”