In Asheville, North Carolina, the rhythm of hand drums fills the streets and eclectic art splashes across brick walls.

In the “San Francisco of the South,” it’s not unusual to see random acts of creativity—like, say, a 10-piece marching band moseying down the road in full funk force.

Empire Strikes Brass, an eclectic group of jazz musicians and dreamers, was born on the streets of Asheville, parading for weddings and pure fun. After years of honing their sound, the group has released its debut record, and has plans to share more recorded music within the year. 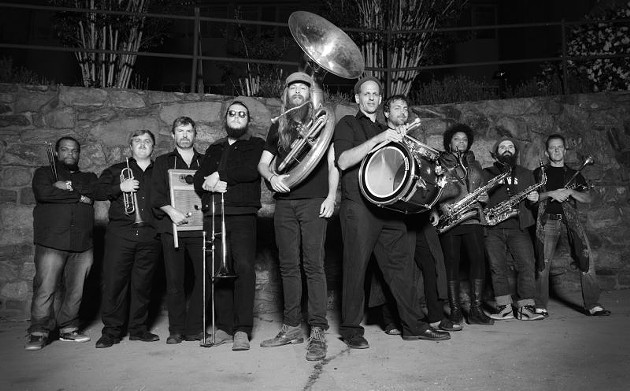 Get funky at Southbound with Empire Strikes Brass.

“I’ve been here for 13 years,” says band founder and saxophone player Pauly Juhl. “It’s an amazing music and arts community, and it keeps growing and growing. I wouldn’t be doing what I’m doing without Asheville and the community.”

Juhl, who comes from a rock ‘n’ roll, funk, and Dixieland background, started Empire Strikes Brass when a friend’s sister needed a New Orleans-style jazz band to perform at her rehearsal dinner.

“I was able to find some good horn players and a drummer, and we just had such a good time,” Juhl remembers.

“It was really good doing that. We started playing music venues and doing New Orleans second line parades around Asheville and got our name out like that.”

Over the years, they’ve gotten even funkier, and their debut LP, Theme for a Celebration, captures five years of fine-tuning their wild sound.

“Our first album turned out to be what I like to call more of a mixtape,” Juhl says. “We had six different writers on it, and when we were shopping our work, our publicist was concerned it was too across the board. We understood it wasn’t easy to market, but that was important for us to show a piece of all of us for the first album.”

Writing is an organic process for Empire Strikes Brass. Typically, one member brings a song to practice, writes it out, and the group will play through what has been presented to them.

“Then we get the final touches, the awesome hits, and extra flavor starts coming together,” Juhl explains. “When we go in the studio, we always have some new surprises, come up with an idea, or keep it open and listen to everybody’s ideas. It’s quite a process, and it can be difficult, but we’re really excited about the original material and what direction it’s going.”

For their next recording, expect brass-heavy songs with deep funk grooves a la Snarky Puppy.

“It’s a little bit more focused,” says Juhl. “It’s in tune with the sounds we’ve developed to be our own over the years.”

When they’re not second lining or performing in breweries like Southbound, Empire Strikes Brass is busy with an array of engagements. Warren Haynes of The Allman Brothers and Gov’t Mule sat in with the group at New Mountain Ampitheatre in Asheville, and the band performed alongside Dr. John & Lettuce at the South Carolina Jazz and Heritage Festival.

The band’s individual players keep busy, too—keyboardist Pettinelli has performed with the likes of Jeff Coffin (Bela Fleck, Dave Matthews Band), Michael Ray (Sun Ra, Kool and the Gang), and Chris Bullock (Snarky Puppy), and Juhl had the honor of sitting in with John Oates at MerleFest.

Whether they’re gigging in the street or a concert hall, Empire Strikes Brass is ready to party, and they always play to the crowd.

“We like to do our originals, but we choose a lot of covers depending on who’s in the room and the feel,” Juhl shares. “We love the people at Southbound, and Savannah is one of our favorite places. We’d probably live there if it weren’t for Asheville!”