UFO film is a 'Sucker punch from the future' 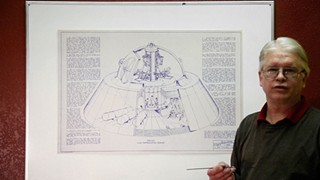 Mark McCandlish with his illustration of the so-called Flux Liner, powered by zero point energy

Sneak Preview of Zero-Point: the Story of Mark McCandlish and the Flux Liner with Q&A with James Allen and his collaborator SCAD prof Jim Gladman

Where: the Sentient Bean Coffeehouse

Time: 8PM (one screening only)

Whether you're a UFO buff or not, you have a unique opportunity coming your way this week. Not only can you screen a new documentary about little-known UFO research, you can give feedback to help make the rough-cut better.

Zero-Point: the Story of Mark McCandlish and the Flux Liner is the project of James Allen, a SCAD MFA graduate in Film and TV.

"It's an unfinished project, with some rough edges," says the filmmaker. "But the story is all there, the main structure is there."

The film shows this Sunday (June 2) at the Sentient Bean, sponsored by the Psychotronic Film Series.

In addition to looking at overall length, Allen says "At this screening I want to get a sense of how the story and information comes across — what you liked and didn't like, if it's captivating or you fall asleep halfway through."

The storyline is absolutely fascinating, and centers on the story of Mark McCandlish, a well-regarded aerospace illustrator.

"Mark was a very successful illustrator in the aeronautics and defense industry in the '80s — he worked for all kinds of major contractors," says Allen.

McCandlish and a friend, a fellow aviation buff, were set to go to an air show at an Air Force base in California. But at the last minute McCandlish got a lucrative freelance gig he couldn't turn down.

"His friend got back and said he'd met some high-level guy — like some assistant secretary of defense or something — and ended up getting into a top secret air show where he saw a bunch of prototype stuff," Allen says. "The friend said 'I think I saw something I'm not supposed to see' — stealth technology and some type of manmade antigravity craft. We're talking about potentially faster than light."

The UFO angle is set up from the opening frames, as the film reveals a presentation in 2001 at the National Press Club in which a number of very high-ranking, highly-credentialed people talk openly about their experience with extraterrestrial presences.

The idea is that the craft McCandlish's friend saw — the friend has since refused to be quoted in the film, though he doesn't deny his account — was possibly "reverse-engineered" from an extraterrestrial craft.

In this case, the so-called "Flux Liner, or "Alien Reproduction Vehicle," as it was also labeled, perhaps as a joke.

Or not a joke?

Allen says McCandlish soon put his illustration skills to work in a meticulous cutaway blueprint of the craft as described to him by his friend.

"I did some more digging, and found out other people had seen the same thing," Allen says. "A number of physicists have backed up the assertion that you could build a craft possibly faster than light, that works by basically polarizing space/time."

That "sucker punch from the future" technology, as it's called in the film, is zero point energy, and Allen explains it like this:

"Scientists discovered in the '60s that the so-called pure vacuum of space is not just an empty void — there's an incredibly dense energetic background field," he says.

So much energy that a shot glass full of this material could "evaporate the world's oceans or power the eastern seaboard for 100 years if you extracted potential energy in that space."

Simply put, zero point energy is a "basically unlimited energy source everywhere," Allen says. "It's a pretty compelling topic in my view. If this kind of technology was brought out and implemented in the public sphere it would change the face of the earth."

Still, the film focuses more on McCandlish's fascination about the craft and zero point energy. His motivation at first was not to go public, "but then he was like holy smokes, this is real Star Trek technology here," Allen says.

"It's a little bit of a cautionary tale, though. He's essentially lost his career," Allen laments.

"The past 15 years have not been easy for Mark. He's the sweetest guy ever, we're really good friends now. I like to think I drilled down more than other interviews with him," says the filmmaker.

Because of Allen's background in visual effects, you'll see "the most accurate CGI rendition of that vehicle on the planet at this point. It's a really good 3D model and we make use of that."

Psychotronic Films Executive and Artistic Director Jim Reed explains why he broke his usual rule about not curating student films in his series.

"I knew within the first 30 minutes of James' film that it was a good match for my organization — and specifically for the occasional Sunday night shows we've been putting on at the Bean," says Reed.

"Those events are separate from our regular Wednesday night series, and afford me a bit more leeway in programming. Also, I liked the idea that he wanted to show a rough cut of the film and solicit feedback from our audience."

The subject matter of the film, Reed says, "dovetails nicely with the boundary-pushing ethos of my organization, and by and large, the folks who regularly attend PFS screenings are extremely savvy viewers. They understand the mechanics of cinema, and they know when a film's pacing, or plot or production design works — and when it doesn't," he says.

So come to the Bean, relax, and pickup a feedback card to have your say on the final cut.