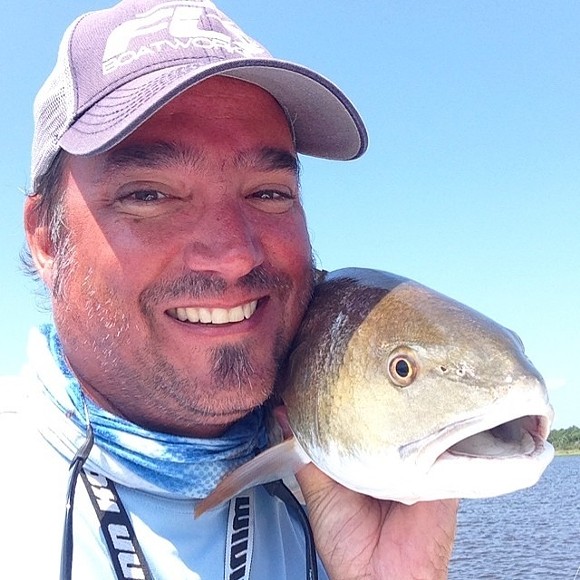 ACCORDING to Kevin Rose—whom you may know as studio mastermind over at Elevated Basement and Superhorse member—there’s no better life than one spent on the water.

“If you live here and haven’t been on the water, you’re totally missing out on 75% of Savannah’s beauty,” he says.

Rose calls his work as a fishing guide a “dream come true”—he’ll never tire of seeing a kid reel in their first fish, relishing the chance to show a tourist the world beyond River Street.

“It’s always been a part of my life,” Rose explains. “I learned to sail, fish and tie knots from my Uncle Frankie and, at a very young age, had my own boat that I practically lived on during long summer days.”

Like Smith, Rose finds his time on the water to be the best relaxation around.

“‘The salt’ is my therapist—insurance doesn’t cover it,” he jokes. “But as a captain and guide, I get to share my sessions with some great people.”

With the Lowcountry’s one-of-a-kind surroundings, there’s always something to take in.

“Our salt marshes are unlike any other estuarine systems on the East Coast,” Rose explains.

“The diversity and sheer expanse of them means no visit goes without finding something new. Strand feeding dolphin are unique to this area, and once you see them teaming up to catch food with their backs out of the water for the first time, you’ll never take it for granted.”

At Tele-Caster Charters, Rose offers fishing tours that last up to eight hours, an island “beach taxi” (hang out on a private island!), and special sightseeing tours.

“Summer months offer some unique opportunities like shark fishing at sunset, tailing Redfish on high flood tides, or quests for the Savannah Slam made up of Redfish, Speckled Trout and Flounder,” Rose says.

“Setting up trips around lunch at Marshside Mama’s at Daufuskie is also a cool experience. Captain Gator at Bull River Marina does trips over there to see local bands on most weekend nights that are a real bargain.”

For more info, check out telecastercharters.com. 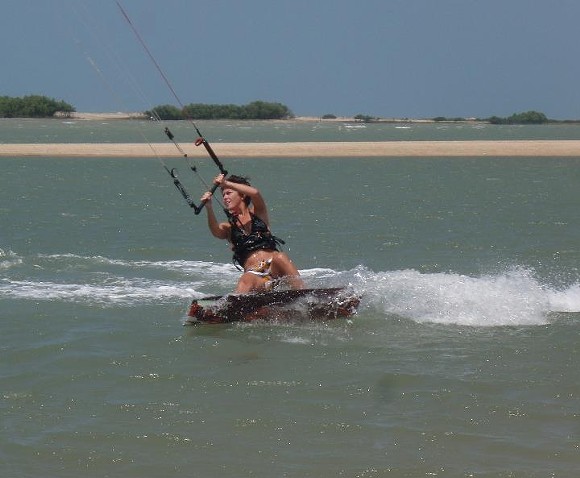 HARPIST Kristin King’s busy gig schedule requires a lot of planning, but there’s one thing she always makes sure to fit in her day.

“The wind is the mistress!” she laughs.

Five years ago, King caught the kiteboarding bug; ever since, the watersport has become a vital part of her life and travels.

“The first time I tried it, I had a break from my own brain,” she recalls. “I could focus on one thing. It’s beautiful to be out on the water and not dependent on a boat or any motor.”

Kiteboarding, or kite surfing, is an incredibly versatile sport. By harnessing the power of the wind through a kite, “kiters” are propelled across the water on a board that’s kind of like a wakeboard or small surfboard.

“Certain spots on the East Coast, you can only ride one wind direction,” she explains.

“On Tybee, you can ride from every wind direction. The west end can be messy, because you’re coming across land and it ends up being a little less steady, but we’re so fortunate.”

While the sport has a relatively low learning curve, King advises taking lessons before grabbing gear.

“You want to be very safe,” she says.

“One bad accident could ruin kiting on any beach. You need to have a healthy fear and respect for the power of the wind by doing proper lessons.”

King recommends All Out Kiteboarding for lessons; register online at aokwatersports.com. 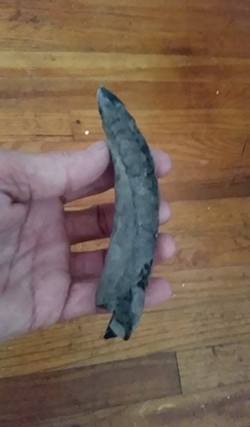 One of Eric's finds, a whale tooth

AN IN-DEMAND bluesman by night, Eric Culberson spends his summer days scouting incredible fossils along the coast. As someone who was raised on the Atlantic, it’s become a lifetime hobby for Culberson.

“Learning about the ecosystem that we have here with our salt marsh—how many species depend on it, as the food chain starts there—was always fascinating to me,” he says.

Touring Savannah’s waterways, folks with a sharp eye may find megalodon, fossilized bull shark, and mako teeth. While those are the most common scores around these parts, Culberson has discovered some rarities over the years, including sections of gomphotherium tusks (“an ancient relative of the modern-day elephant, but a lot smaller than a mastodon,” he explains).

Ready for the thrill of the hunt? First, check with the Department of Natural Resources (DNR) in your area, as there are some prohibit fossil hunting. Once you get the a-ok, Culberson advises slathering on the sunscreen, donning a big hat, and bringing plenty of drinking water along for the adventure.

Now, a tooth hunter never reveals his secrets, but Culberson does have a few tips for the trade.

“Go out as often as you can,” he says. “Everybody develops their own techniques, but sometimes it’s just a matter of scanning the surface. A parcel sticking out looks just like every other shell rock until you develop a knack for it.”

Take your time; don’t rush it.

“Some of the coolest teeth are really hard to find because they’re small,” Culberson notes. “Some are just below the surface, so you can take a hand tool and scratch around.”

As you’re scouring for natural treasure, keep in mind: it’s all about the journey. Even if you don’t find a prehistoric chomper, any excuse to get outside is a good one.

“If you’re not getting out on the water, the rivers, barrier islands, and sandbars, enjoying the beauty on a nice day out, you’re not really getting the total Savannah experience,” Culberson points out.

Cap off a day of hunting with an Eric Culberson Band gig: scope out this week’s Soundboard to see where he’s playing.

FOR ZACH SMITH, bassist in The Accomplices, the ultimate meditative practice happens right in the cockpit of a sea kayak.

“The beautiful and peaceful landscape, its tremendous biodiversity, and the constant change of conditions and the physical challenge of moving through it help to create this perfect realm of possibilities and inspiration,” he says.

“Savannah is a very unique place to paddle in that it has such an expansive system of tidally influenced creeks and rivers which provide a tremendous amount of diversity and opportunity for interesting paddling trips and coastal exploration,” Smith explains.

“With the proper knowledge, training, and equipment, a paddler who lives in this area will never run out of options for discovery and excitement.”

He first got into paddling as a Boy Scout, starting out on canoes and several kinds of kayaks before discovering sea kayaking.

“When I discovered how efficiently I could travel through the marshes, creeks, and tidally turbulent ocean waters of the Lowcountry while carrying an amazing amount of gear and supplies for adventures, I became enamored with the idea of sea kayaking,” Smith remembers.

Smith personally recommends the tours to Little Tybee, Ebenezer Creek, and “any sunset or full-moon paddles.”

To check out what’s being offered this summer, go to savannahcanoeandkayak.com, and turn to Soundboard to see where Zach’s showing off those upright bass chops with The Accomplices this week.