SUPERHORSE is perhaps one of the most enduring bands in the history of the Savannah music scene. They’ve continued on through 25 years of touring, recording, taking hiatuses, experiencing health problems, and just balancing the demands of daily life.

It’s something that would break most bands, but Superhorse is not most bands.

Born as a side project for its seven members, the band has become perhaps the most cherished among its fans despite not being the main priority for any of the musicians during their initial run. Though they rarely play these days, they’ll be participating in The Jinx’s 15th anniversary party on Oct. 12 alongside local favorites CUSSES.

When The Jinx reached out to the band and offered the gig, it was an easy decision for Reed and his bandmates.

“Calling it a reunion show is a little confusing to some people, because a lot of people might think that it means we broke up at some point,” Reed says. “We didn’t. We’re getting back together after an extended hiatus, but we never broke up.”

Formed in 1993, with their first show taking place in 1994, the lineup of Superhorse has remained unchanged in that entire span of time. It’s an unbelievably impressive accomplishment, given especially the fact that singer Keith Kozel has been “going through a long, protracted battle with a type of blood cancer, which led to him needing a kidney transplant.”

Kozel, also the singer for legendary Savannah band GAM, most recently released a compilation of songs new and old from his various projects over the years – all to help offset the costs associated with his health issues. Kozel has continued to make music a central focus in his life, with the Superhorse reunion being just one of the recent shows he’s done.

The band’s longevity has a lot to do with their longstanding attitude and perspective on the music and the industry.

All seven members had other projects that were their biggest priorities in terms of having careers in music, and Superhorse acted as an occasional detour from those groups.

“In the early ‘90s, making your career as an independent artist was a totally different lifestyle than it is today. There was no Internet. Record companies were still the guardians of the pipelines. So when we started the band, everyone in their own way was looking at Superhorse as a way to have fun and blow off steam,” Reed says.

“It was like, ‘Hey, what if we had this thing where we could get together and the goal wasn’t really making money or getting popular?’ It was a respite from the energy, tension, and stress that we were putting into our other bands.”

With the band now recharged and with a major performance coming up, the question lingers about how Superhorse will function going forward.

“We’ve released two different records, and we got a little more than halfway finished with our third record. And then life issues started getting in the way,” Reed says.

“We were really almost done with a record that I thought was going to be the best record we’d made, but it got sidetracked.”

Reed says they plan to revisit and resume work on the project as time allows, but for now they’re looking forward to getting together and doing what they love to do as a unit.

“Now that we’re playing this show, I have very high hopes that this will be a new start for the band,” he says. “I’m viewing it as – we’re going to all get together again, we’re going to work up these older songs, some of which we haven’t played together in six or seven years. My goal, and some of the other band members seem eager about this, is to whip the band back into shape. I think everybody wants to see a third record made.”

For Reed, much of Superhorse’s charm comes from its sometimes unpredictable and loose live performances — something that at one point in their career even won the adoration of a major label executive.

“We were playing a show at a place called Jim Collins Bar. It was located on Whitaker Street, in the same spot where Tequila’s Town is now,” Reed recalls.

“They rarely, if ever, had live music there. They had an old, fucked up honkey tonk piano. Every once in a blue moon they’d have live music, and you’d have to cram in the corner and play. It was one of our favorite places to play,” Reed says.

“We’re playing in there one night, and it was a great show. This group of people wandered in, dressed really nicely and they were totally out of place. They come in about halfway through the show, and one of the guys comes up to me and [guitarist Kevin Rose] after we took a break,” he says.

“It turns out, he was the Vice President for a major label. He and his friends were walking down the street and heard our music, so they poked their heads in and came inside. The guy said, ‘It’s been a decade or more since I’ve seen a band that’s excited me like your band.’ He said we reminded him a lot of the MC5.”

The label exec gave Reed and Rose his card, explaining that he felt he could do something with their music and help them go further. The band’s response, true to their relaxed attitude, was not quite as enthusiastic as the executive had hoped.

“He got really frustrated, because he was not used to this at all. We were being polite and pleasant, but sort of saying, ‘Thanks, but no thanks.’ He was flabbergasted,” he says. “I knew what he was thinking – he was already working up a story in his head for the promotional pitch. It’s a great story about the VP of a label who stumbles into a bar, hears this great band and then discovers them. We understood what was going on.”

Reed says he’ll never forget what the exec said next.

“He said, ‘It feels like you guys don’t really care if you get famous or not,’” he says with a laugh. The VP ended up leaving in frustration.

“Some people might hear that story and think, ‘Well, those guys are idiots.’ Or they might think we’re conceited or too good for that. But that’s not it at all. We just thought that the idea of this particular band being signed to a major record label just seemed like a bad match. It seemed like ordering spaghetti at a barbecue restaurant or something,” Reed says.

With their artistic integrity intact, the mantra of Superhorse is a simple one – no pressure. They’ve taken their cues in that respect from a band like the Velvet Underground, who had a similar experience early on in their career that led to them making the conscious decision not to compromise their art for mainstream marketability.

Reed, a friend of the late Velvet Underground guitarist Sterling Morrison, says that a long conversation with Morrison about their decision to keep their artistry a priority has always stayed with him.

“The main reason we’ve stayed together is because we don’t pressure ourselves in any way to conform to anything that anyone wants from us. But it’s funny - a lot of the songs we play are really catchy, and kind of pop oriented and memorable,” he says.

“Superhorse exists in a weird little vacuum where very few people know we exist. And there is a small number of people all over the world who have heard the music and bought the records, and many of them are rabid, enthusiastic fans. So we don’t really have any money or fame to show for it, but we have made a small number of people really happy. That means more to us than any kind of success or fame that would come through having to second guess decisions about what we’re doing.” 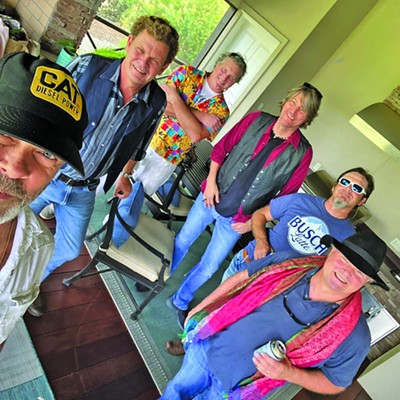