This was supposed to be a very busy March for Suzanne Hokanson.

The longtime weaver was all set for her ON::VIEW residency at Sulfur Studios this month.

Her project, “Weaving the Fabric of Our Community,” was set to bring the community together by creating a weaving made of items brought to her by community members. She’d also weave strips of cardstock where participants would complete the phrase, “My community is...”

She was inspired by a similar project, Weaving Hope, which she worked on for the past three years at the Anderson Cancer Institute. A cancer survivor herself, Hokanson was excited to bring a similar project to Sulfur with a focus on community.

Of course, that was not exactly how things worked out, and Hokanson had to pack up the residency after just a week.

Hokanson with her totems at her original residency space.

“Everything was falling apart, and I was beginning to feel guilty about being in a public space encouraging people to come in and participate,” remembers Hokanson. “It wasn’t good for everybody else I was in contact with, and also me being a cancer survivor and having autoimmune issues.”

During the course of the residency, Hokanson had created three weavings—which she’s named totems— which she then brought home to continue working on. Fortunately, she’d accumulated a lot of objects that people had donated for her to use in her weavings.

“I can do it as long as I have these donated items,” says Hokanson. “That’s the trick—I’m getting down to the end. I have plenty of fabric, but I love putting in the challenges, the things that bring it to another level.”

Those things include horse hair, flip flops from the nail salon, and a baseball. Yes, a baseball.

“My friend Richard sent me two Sand Gnats signed baseballs, and it’s like, ‘How the heck am I going to weave a baseball into the banner?’” laughs Hokanson. “I decided I’d take the baseball apart, so I carefully cut through the red stitches. That part was easy, but then I was left with the inside.” 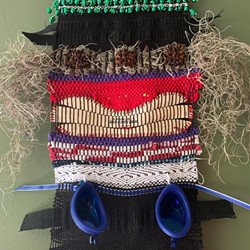 The totems incorporate unexpected items into the weaving.

When Hokanson tore apart the baseball, she realized its shell looked like the images of the coronavirus. That made it into a totem with a lifeguard tube with the word “guard” on it.

Hokanson has also received some really moving items to add to her totems.

“One woman whose husband passed away years ago gave me his T-shirts,” she shares. “Another friend who was under cancer treatment gave me the scarf that she had first worn when she lost her hair. It’s a real honor.”

For the first week of the residency, Hokanson had a few guests who were able to participate in the project by filling out the cardstock slips with their vision of their community. On her handmade loom, she used a black warp; she’s now using a white warp to shake it up.

“When you’re weaving, it’s a color and weave effect in your eye. Your eye blends the one color with the other color,” says Hokanson. “So if you have white that it’s blending with, it makes everything more pastel and maybe more matte. A black warp recedes and makes the colors pop more. It’s fun to see the difference, and I’d love to be able to eventually do a gray warp to see what happens, or maybe stripes.”

Hokanson has been weaving for nearly 45 years and recently retired from being an art teacher, and this new freestyle weaving she’s adopted is a welcome change.

“I’ve done it all—I’ve been a pattern weaver, I’ve woven coverlets, I’ve done all kinds of weaving over the years, and I’m retired from coming up with ideas for my students to do. Now it’s time for me to play,” she says. “What I love about this freestyle weaving is it’s almost like painting. You pick your colors and your textures, and you set up the loom. Sometimes you might want to set it up with a pattern, but often I just freestyle set up the warp on my loom, and then with all of these wonderful colors and textures, I just play.”

Now, the totems hang in Hokanson's home, where she continues work.

The freedom of retirement has helped Hokanson get out of her teaching-first approach to creating art.

“As an art teacher, you think of unifying and repeating and things that make compositions stay together. That informs my choices of what I’m picking, but it’s very, ‘What if I do this? What if I do that?’”

When it’s safe for Sulfur to reopen, Hokanson is interested in continuing the project as it was intended to be completed. It’s an excellent community-first approach that is perfect for the Starland neighborhood and beyond.

“When they asked me what month I wanted to apply for, I wanted March because I thought it would be fun to go to Johnson Square after the parade and pick up some of the paper hats and this, that and the other that people leave behind,” says Hokanson. “There wasn’t any of that. I hope I can go forward with the residency at some future date—who knows.”

Though Hokanson isn’t physically in the Sulfur space, she’s working on the totems and weaving various objects into them. She’s down to the end of her original stash, but as long as she has objects, she can keep going. She’s accepting object donations, but from a socially acceptable distance.

“I did have a couple friends leave some items on their porch for us to pick up,” laughs Hokanson. “We’re having to make these amazing concessions to our lives. It’s a challenge.”