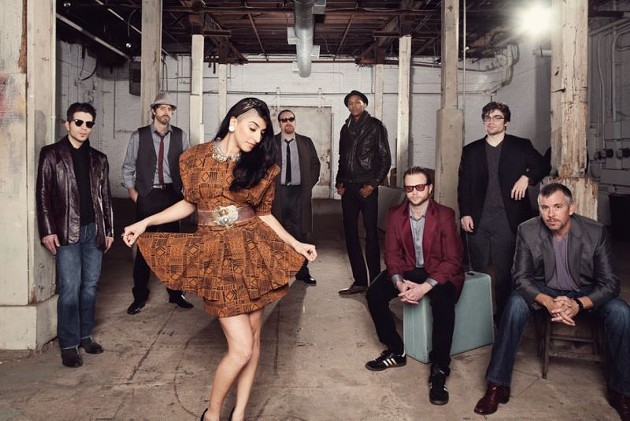 Ruby Velle & The Soulphonics make their Savannah debut at Revival Fest. Catch them on the Bridge View Stage at 9 p.m.

Diamond Street Studios is home to Ruby Velle & The Soulphonics, the dynamic eight-piece group that’s been lighting up stages for ten years. Within those walls, the band rehearses and records, and for five years, they’ve poured their energy into their long-awaited second album: State of All Things.

Rather than revive the template of vintage Motown and Stax records, Velle and The Soulphonics let those influences course through them while bringing their own modern stylings to the sound. The band’s debut album, It’s About Time, was heralded for its refreshing, yet timeless, feel, and the single “My Dear” scored a quarter-million downloads on iTunes.

The success landed them in the top 30 on Billboard’s Heatseeker charts and #4 on the iTunes R&B charts.

For their Savannah debut, the band looks forward to sharing new songs from State of All Things, due in 2018. We chatted with Velle about the band’s growth, making sacrifices to build the perfect studio, and the thrill of creative expression.

It’s completed! We have some singles rolling out soon. Toward November, we’ll release “Broken Woman,” and we’re shooting a video for that. Early next spring, we’ll release State of All Things. We're super-excited to finally share it with you guys.

It seems like y'all have a really great studio and practice space in Atlanta to make the album in.

Yeah, Diamond Street Studios. It was a really collaborative effort between me and Scott Clayton, who's our guitarist, Spencer Garn, our keyboardist and co-producer, who worked with Scott and I. The three of us have shaped and molded our sound over the last few years for this album in a way that many bands don't get to do because they don't have the opportunity to be in the studio making an album for hours upon end. Spencer sold his car to pay for the equipment and we've all made various sacrifices in order to get to that studio space. It's the band's, and we pay for it, and it's an amazing resource to have.

After releasing your first album and playing out for years, what did you want to bring to this new album?

As a band, I think we just wanted to express something that was both a little different and also true to the roots of the genre. We've done a really good job of that with State of All Things, sonically, and from a perspective lyrically. I feel like it's a poignant album on the heels of It's About Time...unfortunately, in this political landscape, we've continued to go wayward, and some of those songs reflect that downward spiral. But some songs are more hopeful. "State of All Things," the title track, is about believing there's an inherent string of goodness throughout humanity, calling it out, seeing that light for what it is. That's something we can do as a band.

The perspective is really inherent to soul music as a genre.

Absolutely, it is, yes. That's something we've thought a lot about as musicians, it's something that our influences and inspirations are grounded in, that message that soul music can offer.

The band has spoken about embracing the past while pushing modern sensibilities in the music. How do you achieve that?

We have Moog synthesizers on the new album, phasers, drum parts that haven't really been explored, so we're dipping out of our truly analog approach. It's a blend of old and new.

You've been together for some time now. How has your dynamic as a band changed?

You know, we just had an email chain going after the [Stax Records 60th anniversary show] about how grateful we are to have an outlet like this for creative expression. I couldn't agree more! It's so wonderful to have that energy—not only for ourselves to share in it, but also to share in the crowd, because without them, we can't produce that same kind of energy. It takes those bodies in a room. It's been really fun, and as any band, you go through your ups and downs. We've been around for a decade now, and there have certainly been some dark days, but overall, we have a great time onstage, and we have a great time representing this music.

Stopover in the Yard with SUSTO @The Grey