WHILE IT'S now a designated National Wildlife Refuge, the Okefenokee Swamp wasn’t always so tame.

The wetland stretching across the Georgia-Florida border holds a history both feral and fascinating. Spanning 438,000-acres, the cypress-steeped home to gators, herons, and carnivorous plants has served as a hideout for draft dodgers in the Civil War, a home for fugitive slaves, and a place for whites who didn’t fit into the plantation economy.

Life in the swamp was a life led outside of society; in fact, due to the isolation many “swampers” of European descent spoke Elizabethan English well into the 20th century.

“That tells you something about how challenging normal life was at the time from the late 1700s all the way to the next century,” notes musician Walter Parks.

A Florida native, Parks made a name for himself as Woodstock legend Richie Havens’ lead guitarist and now performs solo and with his band, Swamp Cabbage.

As a young boy in Northeast Florida, Parks would often venture out into wilds of the Okefenokee to camp and explore. His music has long been woven with sounds that evoke murky waters, low-hanging branches, and sinewy ground. For “Swamp by Chandelier,” which hits Tybee Post Theater this weekend, Parks has delved deep into the history and forgotten culture of one of America’s last frontiers.

“My curiosity about being in the swamp and seeing some of the old vestiges of where people had lived inspired me to investigate,” the singer-songwriter shares.

“I wondered, ‘Was there any music played out there?’ There was a lot of fiddle-playing, shape-note singing, and this form of music I didn’t know much about called hollering.” 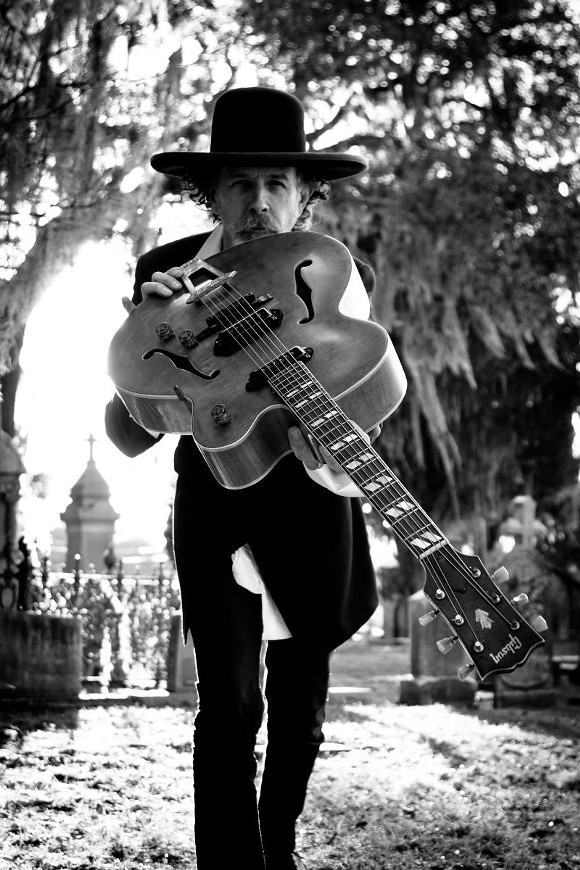 Hollering was less a musical expression than a practical tool of communication used by hunters and farmers moving through the woods.

In an almost operatic bellow, the men would cry out through the pines to let their families know they were returning home safely.

Eager to hear it for himself, Parks discovered recordings in the Library of Congress’s folk archives. The recordings, made in the early 1940s, document the calls of the Chesser family, settlers who harvested sugar cane and tobacco from the Okefenokee’s sandy soil.

The family allegedly had a fondness for sacred harp singing, but their hollers are etched into history.

“You could hear them from several miles away,” Parks marvels.

“I wondered, ‘How could that be? ‘And then I really listened to the hollers and started to do them myself, and in order to hit some of those really high notes that these guys hit, you have to be singing, really, really loudly. You have to have incredible singing technique, even though they probably didn’t think of it that way.”

Parks transcribed what he heard into musical notation.

“I thought, ‘What can I do that’s different?’ I don’t want to just put on some suspenders and go out and yodel onstage—what’s the point of that? I want to do my own interpretation and my own arrangement.”

Jon Waits | @JWAITSPHOTO
Parks will mix hollering with the sounds of the swamp in "Swamp by Chandelier."

Working the hollers into his own swamp inspired guitar stylings was natural.

“I wanted to give this traditional Georgia music its honor and celebrate it for its historical value, but add a contemporary twist,” he says. “When I started playing these hollers on guitar, it actually sounded like Duane Allman! It all makes sense; it’s a regional style. Why wouldn’t it come out in The Allman Brothers’ music? And why wouldn’t the feel of The Allman Brothers have come out of this folk music?”

Using an operatic vocal technique he learned at Juilliard (and noting the irony in that) and a hollow body guitar, Parks says it’s a “high-wire walk” every time he’s performed the “Swamp by Chandelier” show, but a wire he’s pleased to tread.

“I’ve learned to change chords by just tapping on guitar,” he explains of his technique. “I’m vibrating the whole guitar and the headstock. The amp is on the edge of feedback.”

Surrounded by a Spanish moss-inspired installation created by Savannah’s The Experience Collective, Parks’ one-man show has a meditative, sacred feel to it.

“I thought that the contrast of the symbol of opulence that the chandelier provides would be an interesting metaphor to mix with the swamp,” Parks muses.

“The exploitation of the first growth of cypress trees in the Okefenokee made a lot of people very wealthy. Some of these cypresses were as wide as California redwoods. Some were up to 700 years old. I’m just trying to let people know there is a price that we pay when natural resources are used for human survival, and we have to be careful with it. Back in the early 1900s, the mill owners thought they’d have a supply that lasted 100 years, and they ran out in 20 years’ time.” 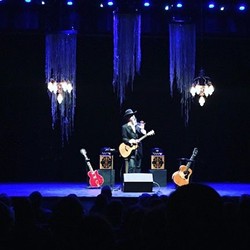 Parks plans to share stories on what he’s learned of the Okefenokee’s history between songs. Listen for originals, Swamp Cabbage material, and some songs by his old friend Havens, who passed in 2013.

“I’m missing him a bit,” Parks says gently. “I’m carrying his old guitar around on tour with me.”

Parks hopes that his music sparks the audience’s imagination and encourages them to go out and make a change in their world. Each “Swamp by Chandelier” show is a one-of-a-kind, intimate experience.

“I’m creating this moment, and [the audience] is witnessing a moment that’s never going to happen again,” says Parks. “I’m creating an atmosphere right in front of their eyes. That’s what I’m very proud of.”