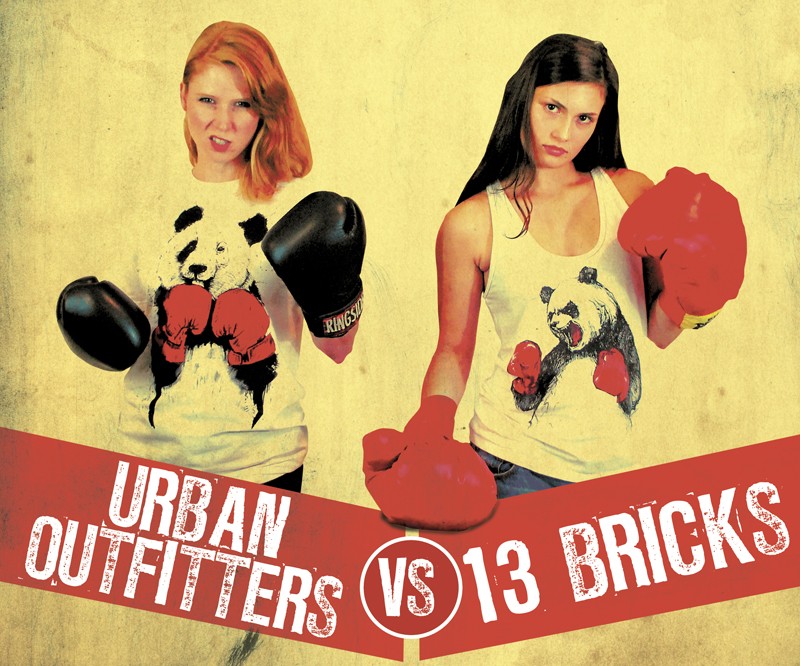 IT ALL begins with a simple drawing of one of the planet's most docile creatures.

Back in 2012, Savannah-based entrepreneurs Emily Quintero, Jared Jackson and Vann-Ellison Seales were searching for designs for their new T-shirt company, 13 Bricks.

Recent SCAD grad Quintero offered up a few from her sketchbook, including a panda bear.

But unlike cute depictions of its plushy counterparts, this panda took a fighting stance, red gloves at the ready. The limited edition design was part of 13 Bricks’ seminal launch and quickly became one of its best sellers.

All was well with the burgeoning brand until a few months ago, when its principles began receiving texts and tweets from around the country about an almost identical garment for sale at Urban Outfitters and on T-shirt megasite Threadless.com.

The similarities are obvious: Same grungy lines, same red gloves, same two-layered print job. The difference is far more important: One comes from a socially-conscious small business, the other mass-produced for one of the biggest clothing resellers in the world.

“We cannot forget the reach these large companies possess,” writes Quintero. “Artists like myself can barely touch them.”

Her angry panda was conceived to show how even the most peaceful can be pushed into rage, and the irony becomes even more poignant in the face of a corporate Goliath.

“People already liked it because it’s a symbol of fighting back,” says 13 Bricks art director Alfredo Martinez. “This takes it to a whole other level.”

The 13 Bricks business partners have been blindsided by what they feel is creative piracy. (Quintero relocated to Portland, OR last year but remains part of the team.)

“We’re already up against the big corporations. Now we have to compete with our own original concept,” laments marketing director Jackson. “It’s like originality itself is endangered.”

It’s been slow going but the company has made progress in the last two years: It moved into a swank new storefront on East Broad Street in May and recently added graphic design and printing services to its business plan.

“Our whole mission is to support artists, and the work of one ours gets jacked,” says Seales, shaking his head. “No one thinks this is going to happen to them.”

Nobody knows how the panda tee ended up next to the shapeless shifts and rayon rompers at Urban Outfitters, but Seales has his suspicions. He and 13 Bricks were invited to be part of an “independent marketplace” at UO’s Broughton Street location last October, where he says that during set-up an official-looking shopper bought one item from every local vendor, including 13 Bricks’ signature bear in the boxing gloves.

While the other panda was already for sale on Threadless.com, 13 Bricks’ owners feel that Quintero’s design may have alerted UO buyers to the trend-worthy value of the image. Seales reports that he began receiving the notices of the panda’s ubiquity a few months after the event.

In her Tumblr plea, Quintero documents that she first posted her pugilistic panda in October 2011 and points out that the other bear did not appear online until January 2013.

The timing is damning enough, and Urban Outfitters’ controversial history doesn’t help. Along with distasteful PR disasters like the Navajo flask flap of 2012, the company has long been lambasted for co-opting original artwork for its cheap duds without permission, including miniskirts bearing designer James Soares’ graphic prints and T-shirts emblazoned with street artist Cali Killa’s shadowy “Beware of Hipsters” motif.

The resulting bad publicity has kept its PR department spinning, but the UO’s fake-Guatemalan fringed pockets are deep. To take recourse legally, the onus is on the artists and small business owners, few of whom have the resources to entangle themselves with a corporate legal team

Kate Strain, an intellectual property and franchising attorney with local law firm Belzer PC, says some lawyers might take up an underdog’s case on contingency.

A judge or jury could order a company to pay out anywhere from $750 to $150,000 per infringing article if the articles in question have been registered with the U.S. Copyright Office.

“If you have filed an application for the work at the U.S. Copyright Office before the infringing activity has occurred or within three months after publishing the work, you may be entitled to statutory damages,” explains Strain.

“For example, if you put up a T-shirt for sale on your website on January 1 with your original image on it and file the copyright application before April 1, you can still get statutory damages if someone sold your image before April 1 because you filed the application within three months of publication.”

It can cost $35-$55 per image to file a copyright application at www.copyright.gov, and up to $800 to fast-track the process.

“You must own a copyright registration for your work before going to court,” stresses Strain.

Quintero’s panda has not been protected by a copyright application, but copyright law recognizes her ownership by virtue of having created the image, as long as she can show that it is a “work of original authorship fixed in a tangible medium of expression.”

“If you do not have a registration, you still own the copyright,” continues Strain. “It’s just harder to prove in court. You’re not entitled to statutory damages, but you may be entitled to profits from the sale of the infringing works.”

The test of copyright infringement is whether the allegedly infringing image is substantially similar to the original image.

Another company can’t slightly alter an image and call it theirs; however, another artist or company may be able to take an original image and add a new expression, meaning or message to it.

The legal term that allows this is “transformative use,” and its most famous example is Shepard Fairey’s iconic 2008 poster of Barack Obama.

Fairey manipulated an Associated Press photo taken by Mannie Garcia with layers of color and blocky graphics, leading to a lawsuit and countersuit that were settled out of court in 2011.

“It would be up to a judge or jury to decide whether an image is substantially similar to another image or if it constitutes transformative use,” says Strain.

In these fast-moving times when publically accessible information and imagery is tangled up in bytes and bandwidth, creative license is a fluid concept. Artists must be vigilant to protect their work, and entrepreneurs have their research cut out for them.

(On a related note, trademarks are also a tricky business: 13 Bricks itself had to change the name of its design to “Fighting Panda” after a company in Australia sent a cease-and-desist letter informing that it owned a trademark for “Boxing Panda.”)

Strain’s best advice to artists is to file copyrights for their designs as they go.

“It’s a good habit to get into,” she counsels. “Every three months, sit down and see what images are selling, determine what has the most economic viability and file a copyright application for them.”

Quintero, Seales and the rest of the 13 Bricks crew have no intentions of pursuing legal action, though they’re hoping the resulting publicity will help raise awareness of their brand and the need for artists to safeguard their intellectual property.

There’s also the possibility that the case of the hostile pandas can be chalked up to coincidence. Science wonks might even cite as an example morphic resonance, the theory by biologist Rupert Sheldrake that posits how similar ideas can arise independently from unrelated members of a species.

Connect tracked down Hungarian illustrator Balàzs Solti, the artist who created the image for Threadless’ panda shirt, and asked him to comment on the similarities between the designs.

He responded immediately with the claim that his design, titled “The Winner,” came directly from his own mind.

“I’m sorry if this company feels that [mine] is a copy of that work [sic], but I’ve never seen before this design,” writes Solti via email. “It didn’t viral on the Internet [sic].”

Solti’s other work reflects the same grungy style, and he has several panda illustrations on his website going back to 2011. His boxing bear has a different facial expression than Quintero’s and also originally had blue gloves, which were changed to red by Threadless before the T-shirts were manufactured.

Solti says he came up with the idea sometime “at the end of 2011 or in early 2012” and first posted it on January 1, 2013. He submitted his panda to a contest on Threadless.com later that year and it was chosen for a mass print run in early 2014.

In his email, Solti seems to accept that these kinds of creative overlaps happen sometimes, an occupational hazard of being a commercial artist.

“It [has] also happened with me that I found [a] design which looks similar to my design, but I rarely think that the artist steal my idea,” he offers.

E-mails to UO and Threadless’ PR departments have not been acknowledged as of this writing. Perhaps they have bigger problems to handle at the moment: Urban Outfitters has reported steadily declining sales for years and was namechecked as hopelessly basic in the new season of Orange Is the New Black.

Solti’s Threadless shirt has already found its way to the markdown racks at TJMaxx.

On the other glove, 13 Bricks has a grand new space to manage and an updated line of T-shirt designs coming out later this summer—including a reprinted run of Quintero’s indefatigable panda.

The company has shored up its licensing agreements and will also require registered copyrights on all new designs.

“We’re just taking this all as a valuable lesson,” says Seales. “Our main goal has always been to protect our artists, and we’re going to be better prepared from here on out.”

Handmade for the holidays 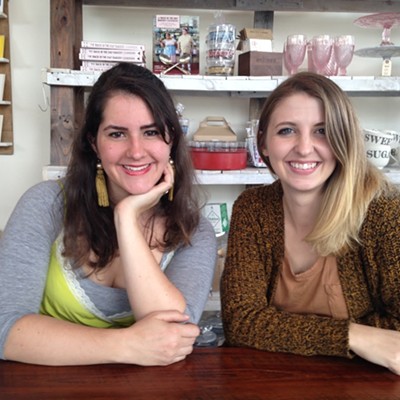 13 Bricks: Not your average T-shirt 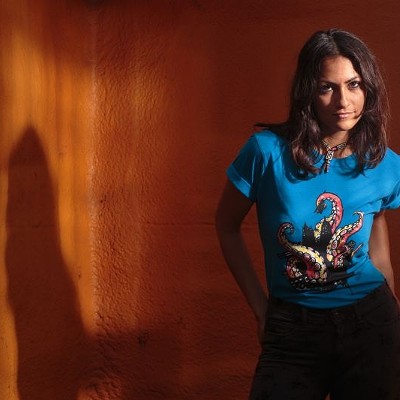