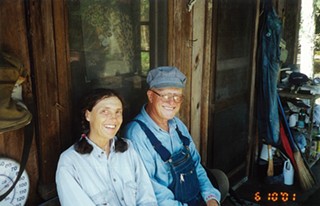 Listen to a podcast of this interview and others by Orlando Montoya at www.savannahpodcast.com

She eats roadkill, shot a man in self-defense and cuts open turtle guts.

But she also published groundbreaking science and shaped public policy on Cumberland for four decades. And she did it all from a rickety shack in the wilderness. Harlan’s new biography, Untamed, recently released by Grove Atlantic, gets behind her outer image.

“She embodies the spirit of Cumberland Island, that wild, untamed spirit,” Harlan says. “And I think that’s why people gravitate toward her because she embodies what we love most about that island.”

Ruckdeschel has been at the center of raging debates on Cumberland Island, a National Seashore owned by the American people, since she moved there in 1974.

Those debates often pit this scrappy, pig-tailed naturalist in overalls and boots against the well-heeled descendants of the nation’s industrial elite.

“What is most important to her is the wild, unmanipulated and unmanaged part of the island,” Harlan says. “She thinks nature should be allowed to run its course.”

Harlan worked with Ruckdeschel for two decades as a fellow naturalist and wilderness advocate. He had unprecedented access to her letters and journals.

And his biography uses these intimate details to splay open Ruckdeschel’s innards, like the turtles she guts.

And there are many details to explore.

Three close male companions died near her little house in the woods. There was the lover who attacked her in a drunken rage, the friend who couldn’t swim and the husband who collapsed from a stroke on her front porch.

Harlan’s reckoning of these tales is largely positive toward Ruckdeschel. But he doesn’t miss the central hypocrisy in her politics. She believes the National Park Service ought to restrict human access to the wilderness. But she still lives in it.

“All of the gory details are in there if you want to read it,” Harlan says. “But what she wants to come from this book is a renewed interest in protecting Cumberland.”

The island faces many challenges. Wealthy islanders want to extend their residencies on the island, even though they sold their land to the Park Service and agreed to leave. And of course, rising sea levels eventually will threaten the entire Georgia coast.

I was just amazed to learn about Ruckdeschel’s scientific accomplishments. She became one of the nation’s foremost experts on sea turtles. But she didn’t do it from the halls of academe. She did it the old-fashioned way. She used keen, first person observation, and good notes, over a long period of time.

Harlan’s narrative is engaging and always forward-moving. Characters leap off the page. Colorful figures, including developer Charles Fraser and Carnegie heir Lucy Ferguson, all have their own roles in this real-life drama.

Critters also end up being big characters. Turtles, horses and snakes. Ruckdeschel gave them all funny names, like Pretty Butt and Stumpy. She is a Georgia original.

I had the pleasure of meeting the woman herself on three occasions. Back then, it was a lot more difficult. There wasn’t a Park Service van running up to the remote north end every day.

I interviewed Harlan for my new website, savannahpodcast.com, when the author stopped on his way to a book reading on St. Simons Island.

Hopefully, Harlan will find his way to Savannah soon to talk about Ruckdeschel and her beloved Cumberland Island home. It’s also our national treasure.