Talking about it with Charity Lee

Mental health is the focus of ‘Let’s Talk’ discussion series

CHARITY LEE’S story is difficult to talk about, but that’s why she tells it.

In 2007, Lee’s 13-year-old son, Paris, killed his four-year-old sister, Ella. That life-changing event inspired Lee to start the ELLA Foundation, which aids those affected by violence, mental illness, and the criminal justice system.

The story is also told in “The Family I Had,” a documentary by Katie Green and Carlye Rubin that premiered at the Tribeca Film Festival. 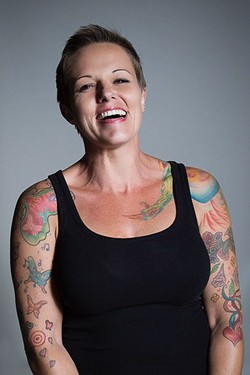 We caught up with Lee last week.

Tell me about your Let’s Talk discussion series and how that came about.

Charity Lee: I saw a lot of people on Facebook and in opinion pieces, especially after the Parkland shooting, saying, “We need to talk about this more!” And I was like, “Well, okay, let’s talk about it.” This particular one is about mental illness because I realized after 11 years of working in the field of criminality and mental health and trauma and victim advocacy, many times I’ve felt like I’m just putting a Band-Aid on things. I’m a really big believer in education, and I think it’s time we start talking about the underlying issues that are affecting criminality and trauma and incarceration.

A lot of people aren’t prepared for dealing with mental illness. It’s not like something most people grow up learning. I had the benefit, before my son killed his sister, of having a background in child and family development in child psychology. I kind of had a place [to come from], I had a theoretical and academic experience with other people’s stuff, but it helped when the murder happened.

How did that background help you move forward?

Trust me, I’ve become a lot better educated in the past twelve years. Through my relationship with my son and working with other victims, other families, other families of victims, families of murderers, working with other perpetrators of violent crimes—for me, how it helped through my journey is at a certain point, it helped me forgive Paris. I understand now that he is what he is and he has certain limitations. Now, could he have made another choice? Certainly. I still believe that if he had made other choices or delayed his choice, he would still be who he is. Somebody would be in danger. Something was going to happen at some point. You can say, “Well, I wish it wasn’t Ella,” but I don’t wish it was anybody else.

I think it’s important to point out that the majority of mentally ill people are not violent. If they’re going to be violent, it’s typically towards themselves. I used to ride with the San Antonio Police Department as a crisis interventionist and even with the people we encountered who were acting out violently, if you have a certain skill set, you can talk most people down.

How did you begin the ELLA Foundation?

Ella died in February 2007, and it was sometime maybe in March or April—the first year after Ella died, time didn’t matter. Somewhere pretty close to the time my son was arrested and being held in the local juvenile detention, the [Texas] state juvenile detention system was indicted by the federal government for the physical and sexual abuse of the children in their care. That made me really angry. My distinct thought was, “That’s not happening to my baby. I don’t care what he did.”

When your child gets to that point, the state is mandated by law to assist in the treatment and rehabilitation of a juvenile. That’s what we pay taxes for; it’s what the law says. There is nothing that even smells of rehab if they’re being physically and sexually abused. It’s more of the same for most of those kids. Like the majority of kids in there, I know our family had some pretty dysfunctional aspects, but Paris was never physically or sexually abused and I wasn’t going to let it start now.

I wasn’t able to do anything about it for the nine months he was being investigated. Then he was sentenced and transferred over to the state system, and it was around that time I took some time off just to get out of town. When I came back, I became obsessed about doing something. For me, I know now it was a place for me to channel my rage.

I started working with other groups related to issues on juvenile justice. I started meeting a whole lot of families. I realized that even though I had lost everything that meant everything to me, I still had quite a few things left that a lot of the other people I was meeting did not have or could not do. I had my intelligence, I had my ability to get things done—I’ve always been a go-getter—I had the financial ability to not have to work at all.

I decided at some point that I was going to take all the love I felt for my children, because it was still there, I just didn’t know where to put it, and I decided to give it to other people.

What do you hope people take away from you, the ELLA Foundation, and the Let’s Talk series?

My hope for the series is that it will offer support to those who need it, that it will educate the general public on mental illness, and that it will encourage everyone who attends it or hears about it or reads about it that they’ll start thinking about [mental illness]. I really hope it helps to reduce the stigma. In everything I do, I try to lead by example by being so open about what happened to our family and to say, “See? It’s okay to talk about it.”