Talking about... the King-Tisdell Cottage 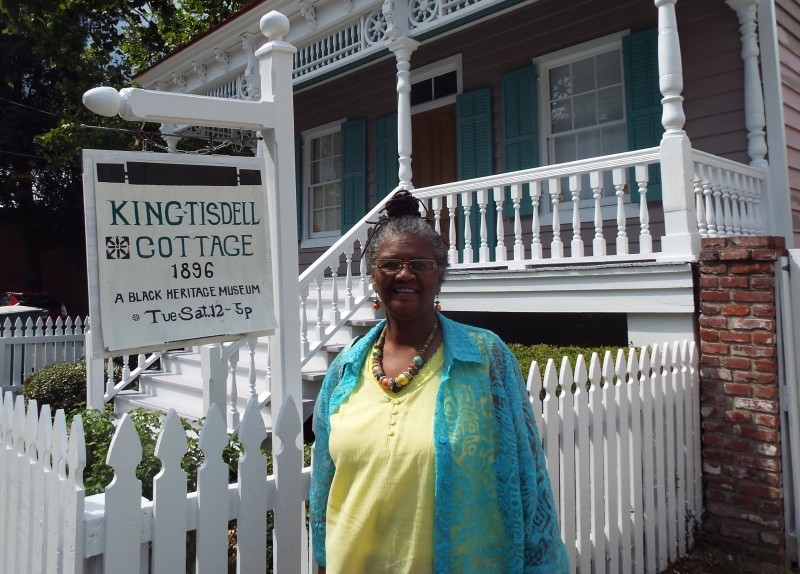 Listen to this and other interviews by Orlando Montoya at savannahpodcast.com

WHEN I called Vaughnette Goode-Walker to arrange our interview, she said she was driving to her second home.

She laughed and said, “The King-Tisdell Cottage.”

I should have known better.

A historian, tour guide and overall font of knowledge, Goode-Walker has spent the last year and a half not just “renovating” Savannah’s only African-American house museum.

“Renovating” implies HVAC, floors and paint.  Yes, she oversaw that. But what she really did at the 1896 gingerbread style house on Huntington Street can only be called a “transformation.”

“It was putting everything into context for the Savannah community,” Goode-Walker says.  “And I think that took more time than anything else.”

Goode-Walker spent months moving and sifting through the museum’s collection of artifacts. She looked for new ways to interpret the house’s story and its relationship with the larger Savannah story.

The result is a roof-to-basement historical re-assessment.

“It was so exciting seeing documents of prominent blacks here in Savannah who, I had heard their names, but I had never really read about,” Goode-Walker says.  “And the cottage is just brimming with artifacts.”

The museum displays an old sign from a shop that once repaired shoes around the corner.  The sign has a connection to the first black graduate of West Point.

The house also shows an old picture of a “pressing club,” one of 25 black-owned cleaners that once kept Savannah residents looking sharp. The picture has a connection with the home’s first black owners, Eugene and Sarah King.

“They were entrepreneurs,” Goode-Walker says. “They met in the pressing club business. Sarah eventually did her own business from her home.”

Sarah ran a bakery. Eugene cleaned. And together they bought the house in 1925.

But Goode-Walker says she resisted calls to interpret their story as the “American dream.”

“What did they get out of it?” she asks. “They worked very hard.  But, ultimately, Eugene would die of a heart attack at the age of 40. Sarah would follow him shortly with a stroke.”

Savannah justice crusader W. W. Law saved the house from the wrecking ball in 1981. Of course, Law’s life was animated by his 26 years as Savannah NAACP president, ending in 1976.

“But beyond that Civil Rights movement, he had another whole life,” Goode-Walker says. “And that was as a preservationist.”

I told her about my own experience with Law shortly before he died in 2002.

It was about historic preservation.

I interviewed Law when he joined the Historic Savannah Foundation in opposing a large new bus terminal on Oglethorpe Avenue. And my story set Goode-Walker off into more stories about Law.

The man himself was a keeper of stories. The cottage houses a small part of his massive collection.

“The labor of love part of it for me was making Mr. Law proud,” she says. “A couple of days, I would be in here going, ‘Boy, I wonder where I would find this or that.’ And it would just appear.”

And there’s more work to be done. The nonprofit King-Tisdell Cottage Foundation wants to turn the attic into a reading room and a lecture space.

But for now, after being closed for about five years, this magical place just a few short blocks from Forsyth Park is welcoming visitors again.

The trolleys are stopping. The backyard garden looks wonderful.

And Goode-Walker, Law’s spirit and the rest of Savannah can celebrate.