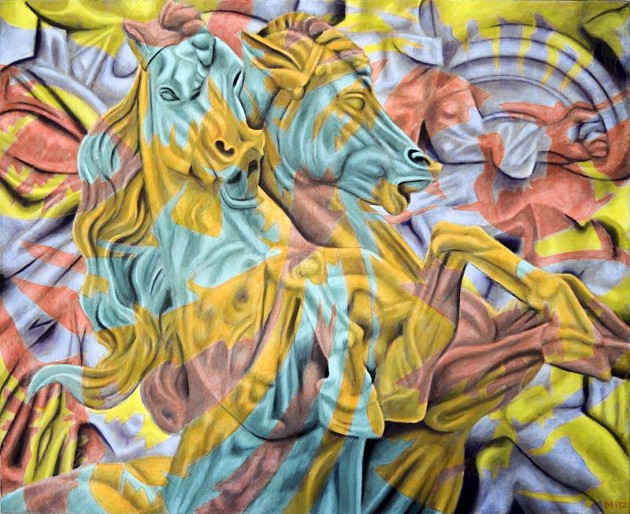 Upstairs in a church outside of town, the air in the room is thick, circulated by an open window and a few fans.

Mitz doesn’t mind the heat, though.

“None of the great painters had AC,” he points out with a smile. “If they can do it, why can’t I?”

Mitz is a prolific painter, and his studio is a testament to his output. Paintings fill the room, both on the walls and stacked dozens deep. A bass guitar stands by the couch, a testament to the other love of his life.

Raised in Chicago, Mitz learned how to play bass guitar from some of the greats, but he’d always been artistically inclined.

“Painting came first,” he remembers. “I was born with a gift of being able to draw pretty much whatever I saw from a young age. I never drew like a kid.” 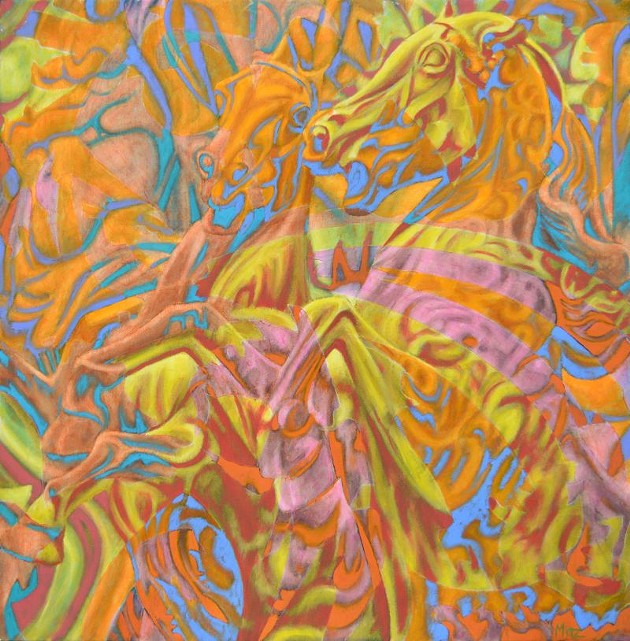 Mitz met one of his mentors, Bob Novak, in his junior year of high school.

“He was an artist, and I thought I was a hot shot because I could paint realistic,” says Mitz. “He very kindly told me that I was no good at all. I really had no idea what painting was about. I think I was at least smart enough to listen to him and know that I had a lot to learn.”

Over the years, Mitz honed his skills and developed a technique that blended his passion for both painting and music.

“I call it polyocular. It’s a made-up word, but it works if you think about it,” he explains. “It’s a Greek term, ‘poly’ meaning many, ‘ocular’ meaning vision. Polyphonic is a musical term—it’s my favorite music, where you have three or four independent compositions that are beautiful alone, but you play them at the same time and it makes something greater than the sum of its parts.”

The polyocular technique began when Mitz was working in animation. At that time, before computers, animators used tracing paper to draw their cartoons.

“My job was, they gave me the tracing paper, I put acetate over it, outlined it, turned it over, and painted it in,” he explains.

The acetate and tracing paper technique helped MItz in his painting—instead of erasing, he could put tracing paper over his work and make alterations that way.

After working at that job, Mitz had an a-ha moment in an unlikely place.

“In my mid-twenties I was just hanging out with my dad, and it all came together in one moment,” recalls Mitz. “Polyphony. Polyocular. Tracing paper. Music. Art. Everything I’d been doing, I had this idea of this polyocular painting that just rolled through my head. I was like, ‘This is it.’”

Mitz is a talented realist painter, but before he came up with his polyocular technique, he’d been working mostly abstract.

“When I first got this inspiration, I was doing purely non-objective, abstract stuff,” he says. “I had to figure out the vocabulary and syntax of this new language. Some artists develop a language. You have to invent the language. It may be based on another language, but once you develop your language, you can sing in it and write poetry in it. That’s been my life’s work.”

Once Mitz found his voice, he was able to move closer to his style.

“I realized, if I’ve got three layers of composition, one of them could be representational,” he says. “They don’t all three have to be abstract. That was the next breakthrough, and I started incorporating realism back into my multilayered work.”

Mitz sketches the scene and layers abstract compositions on top, then paints it in using transparent glazes.

“I use these because they absorb all the colors really well,” he explains. “For the background, instead of purple-grey, I’ll make them turquoise-grey, then I lay the transparent glazes over them. I need white underneath to see what the color really looks like.”

Color is a major influence on Mitz’s work. He teaches a Sunday class at the Studio School about what he calls color chords.

“I work in color chords—that’s how I think of color,” he says. “Music and visual art are not the same, they’re very different, but I can explain visual art by using musical terms. It helps people understand, especially if they’re not looking at the painting.”

Mitz’s career is approaching what he calls his late period.

“Every step in my career has led me to something else,” he says. “I’ve had different levels of success—nothing over the top, but I’ve always been able to maintain my studio and paint, which I’m really grateful for.”

Perhaps the biggest accomplishment of his career is the ability to create his own form of expression, just like the greats.

“All the great painters know how to rhyme and make great poetical expressions,” he says. “Some of them don’t, and what you have, then, is illustration. That’s the difference between illustration and painting.”