Forsyth Farmer’s Market regular is part of a thriving, but difficult, family business 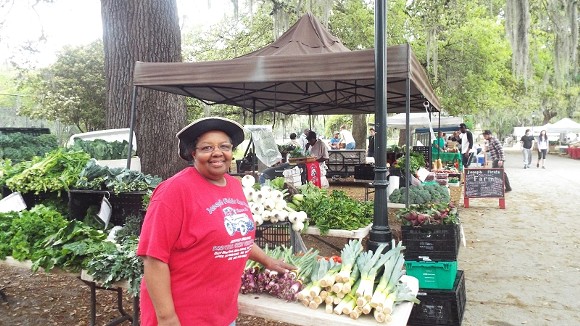 Helen Fields says one of her favorite foods to make from her farm-grown bounty is squash casserole. She can be found most Saturdays at the Forsyth Farmer’s Market.

HELEN FIELDS thought her husband was crazy when he told her that he was giving up his welding job and going back to the farm.

But Joseph Fields, a third-generation farmer from John’s Island, S.C., was serious.

Now, 41 years later, Helen, a former booking coordinator for a steamship company, can be found most Saturdays at the Forsyth Farmer’s Market, selling vegetables at her family business, Joseph Fields Farm.

“It can be demanding,” Helen says.

“Being a farmer’s wife,” she says.

Joseph wasn’t around to defend himself when I spoke to her, flanked by collards, cabbage, kale, strawberries, squash and peas at a recent market. Her husband was selling vegetables at the Saturday market in Charleston.

But I can’t imagine anyone ever saying anything about farming is easy. You have to work with your customers.

“Even if it’s after eight o’clock at night, if they want to buy something, and he has it to be sold, he’s going to sell it to them,” Helen says. “But that means that if you’re at the dinner table, you’re going to move.”

And moving is something that I’ve learned you always have to do to stay in business, whatever it is. Farming just carries bushels more physicality than most businesses. In summer, they might carry on the family tradition seven days a week.

“When the watermelons, tomatoes and all that’s coming in...” she says, trailing off. “Squashes? They have to be picked every other day. So sometimes, you have to pick on Sundays, before you go to church or either afterward.”

When I ask about all that bending and lifting in the hot sun, she tells me she’s actually the business behind the business.

Someone has to keep up with all the bookkeeping, certifications, marketing, sales, tours and something called a ringing phone.

I’d almost prefer the dirt. (No, I take that back immediately.)

“You wouldn’t want me to go into the fields because of my production,” Helen says with a laugh. “I wouldn’t bring anything out of the fields, very little. I can’t stand the gnats and the mosquitoes. And my back is bad.”

Her desk has grown an extra layer of paperwork since the farm became certified organic about 10 years ago.

But thankfully, Helen says, the organic label also been good for business.

“The chemicals and stuff that you used before to kill the weeds and all that, they have to be hand-picked,” Helen says. “We’re at more markets now.”

That means more opportunities for people to eat healthy. And it means another family farm can continue when so many have folded.

Not that she wants to wake up at 2:30 in the morning every Saturday for the rest of her life.

“What would you like to do next?” I ask.

“Retire!” she says. “My husband is not ready just yet.”

Helen is putting her faith in an 11-year-old grandson, Xavier C.J. Dillahunt.

“He’s very passionate about becoming a farmer,” she says. “So, he plans to go to college to major in agribusiness. And he’s going to come back and take the farm.”

Until then, you can count on Helen, usually accompanied by her son J.J. and helper Dwayne, to trundle down US Hwy. 17 with a truck full of nature’s best for the Park Avenue end of Forsyth Park every Saturday.

Watch that space for okra, tomatoes, peppers and cantaloupe as the seasons change.