I DON'T KNOW how many people remember back when the Starland Art District first started. But those gallery openings in the early 2000's were something to behold.

Among the many artists who took a leap into that neighborhood, one stood out for the sheer physicality and spectacle of his work. Glass blower Jonathan Poirier now has been working with flames at Drayton Glass Works for 12 years.

“That’s our bragging point,” the artist says. “We’ll work until we can’t work.”

His longevity in the neighborhood comes in part from his art’s stunning array of forms and colors. Bowls, platters, sconces, birds, chandeliers and bottles are just some of the shapes.

And the hues range from typical rainbow shades to the more obscure aurora. 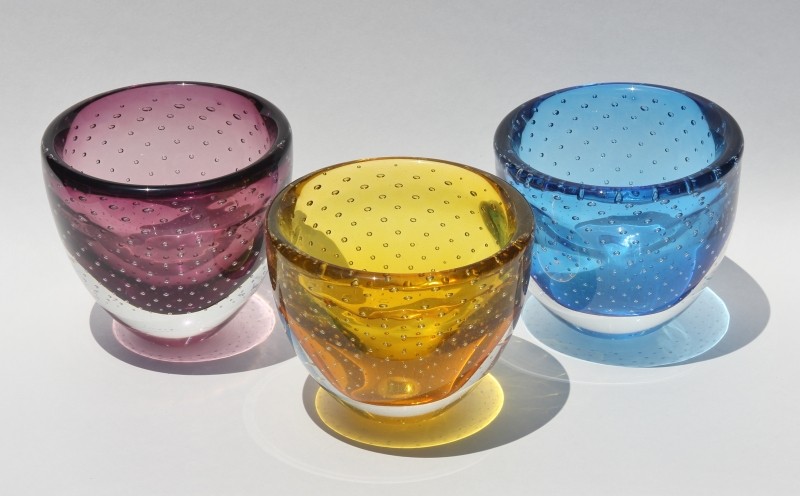 “You don’t ever know what’s going to sell,” Poirier says. “We enjoy making the work. So hopefully we’ll keep a good eye and good design and people will continue to buy it.”

Poirier is incredibly down-to-earth. He refers often to his assistant, Thomas Sodeur. The pair work side-by-side near a hot furnace all day and both are integral to the process.

“Glass blowing is a team sport,” Sodeur says. “You work with another person and you have to be attentive to that.”

Their motions are careful and repetitive. They sit in silence for hours.

The only sounds between them are the radio and the hiss-pop-sizzle of their molten creations. When conversation arises, it’s often about mutual inspirations.

“We were just talking about Maurice Andre,” Poirier says of a famous French trumpet player. “Our influences come from other people who aren’t just glass people. We like music, we love Galileo and Tesla. We love some of the old inventors.”

How humans invented glass making itself is shrouded in myth. The process to me seems like a transporter beam in operation.

I watched Poirier and Sodeur make some bottles. And I find it hard to explain.

“You have to coordinate your hands and your body and understand the movement of the glass when it gets hot and when it gets cold,” says Sodeur. “If you don’t have confidence about it and you’re thinking about too much stuff then things go bad.”

I smile when Poirier says he’s avid golfer. Glass blowing seems a lot like golf’s mysterious “swing.” You either have it or you don’t.

But while the art’s creation is somewhat ineffable, the same can’t be said of how Poirier started in his profession.

The native Rhode Islander points it all squarely back to an apprenticeship he landed with renowned Swedish glass maker Jan Erik Ritzman.

“I just would write him letters at least once a month,” Poirier says. “I’d try to send funny things in the mail and try to keep his attention.”

Poirier wrote Ritzman without reply for two years while the younger artist toiled away in minor league professional hockey.

He says an article in Texas Monthly broke the master’s silence. The story quoted Poirier as saying he would continue in the sport “until Jan Erik Ritzman calls.”

Shortly after he sent him the article...

“My mother answered the phone and said ‘There’s a guy with a funny accent asking for you.’” Poirier says. “I picked up the phone and he said, ‘It’s time to come.’”

Poirier’s art draws on this Scandinavian background – simple, clean and streamlined. After the apprenticeship, he and Sodeur worked together in Rhode Island before scouting out their Savannah location.

They say they love the city’s artistic community for the opportunities it gives them.

“One of the greatest treats is that there’s another day that we can do it again,” Poirier says. “We’ve created a spot where we can show up tomorrow and keep this fire going.”